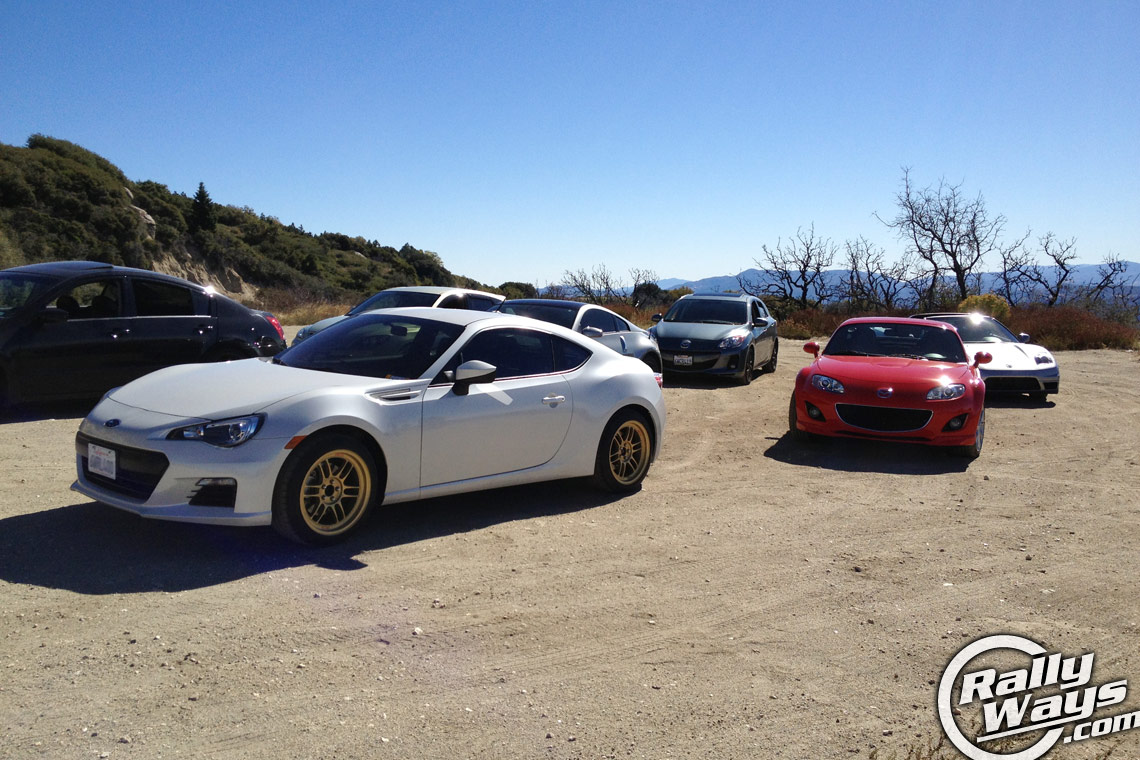 Too many of us car show fans are happy enough polishing up our rides and showing off a perfect paint job at a local meet. I mean, it’s easy, mellow and the depreciation factor is low when the miles are less. But cool cars are meant to be driven. You know that.

I drive a Miata. Of course I bought it to drive it. If I just wanted to impress people, a Corvette or a Porsche might have been a better choice. True, some people are impressed by Miatas, but most just default to something else.

This weekend, I finally managed to get some time to do a drive with the San Diego Car Enthusiasts club (SDCE). After countless meets and car shows, an actual drive is a nice change. Plus, when you drive around on your own, on unknown roads, you spend half of the time trying to figure out where the heck you are and where the heck you’re going. In a group drive like this, it’s quite nice not worrying about getting lost and just following people that know the road ahead in a spirited, yet safe manner.

The first leg of the trip took the entire group up to Julian in San Diego County. The idea was to have breakfast up there before heading back down the mountain roads. The crew divided up in 3 groups to make the drive more manageable. Plus, everyone has a radio in order to improve communication and make the drive safer. The leaders can call out road hazards, landmarks or other important occurrences like waiting for members that have fallen behind.

…when you drive around on your own, on unknown roads, you spend half of the time trying to figure out where the heck you are…

It was my first ever drive to Julian and I was pleased not to have to worry about where I was going. Just driving. Following two Mazda 3’s on the way up, in the middle group proved to be a great choice as the pace was steady and manageable. I must say, the road up to Julian was very nice and the tarmac was very clean – Like if the government officials in that area ACTUALLY have money to fix the roads! Surprising these days, I know.

We all regrouped in Julian and had a great breakfast. Some of the guys bought pies… Apparently, Julian pies are incredibly famous and you must not leave Julian without one. I did though. I can’t fit pies in my Miata.

For the drive down, the group divided in 3 again. Some guys headed to a car show in Borrego Springs, others were taking the Sunrise road (wherever that is) and the last group decided to head to Palomar Mountain. I decided to stick with that group as I’ve been wanting to drive that road since doing the Idyllwild drive a few months back.

Again, I hung with the Mazda 3’s, a Corvette, an S2000, a 350Z and a couple of Acura NSX’s. The Palomar Mtn section of the drive was fun and the views were great. I didn’t like is as much as the Julian section though. I prefer going uphill than dealing with downhills. Unlike the Corvette in the group, my MX5 doesn’t have as much torque and it has me rowing gears on all the uphills, but to me that’s a lot of fun. The roads on Palomar were not as nice as the Julian ones as far a conditions go. There were too many patches of fixed up tarmac and many sections with loose gravel in the corners.

One of the Mazda 3’s cooked it’s brakes on the way down, but it gave us and opportunity to stop and check out the view and shoot some pics. One of the guys climbed up the side of the hill to get a good photo vantage point of all the cars – Not without posing like a super hero on the side of a mountain.

On the final stretch of road the area felt like a motorcycle race track. Tons of bikers just hooning it down. And what’s crazy is many of these corners don’t even have guardrails! Our radios proved very useful when we were warned to stop on the side of the road. A motorcyclist had just slipped on one of the corners after hitting a rock on the road and he slid into a guardrail – luckily there was one. Thankfully, apart from a few scrapes mostly on one of his hands, he was alright. The bike didn’t fare very well though and it was unrideable afterwards. The mountain superhero got to be the superhero after all, as he had a first aid kit in his car (who would’ve thought) and proceeded to mend the biker’s hand.

That was pretty much it. The final stretch of road before getting to Pala and Temecula was done cruising and cooling down the cars. Top went down, music came on. Sun shining, but not too hot as we’re heading into late fall shortly. Then, a quick stop for gas and refreshments before heading home.

Overall, it was great fun and a great experience. It’s a good group of level-headed guys. When I got home I looked at my odometer and I had clocked 150 miles. Not bad for a half a day’s drive. Looking forward to another one.