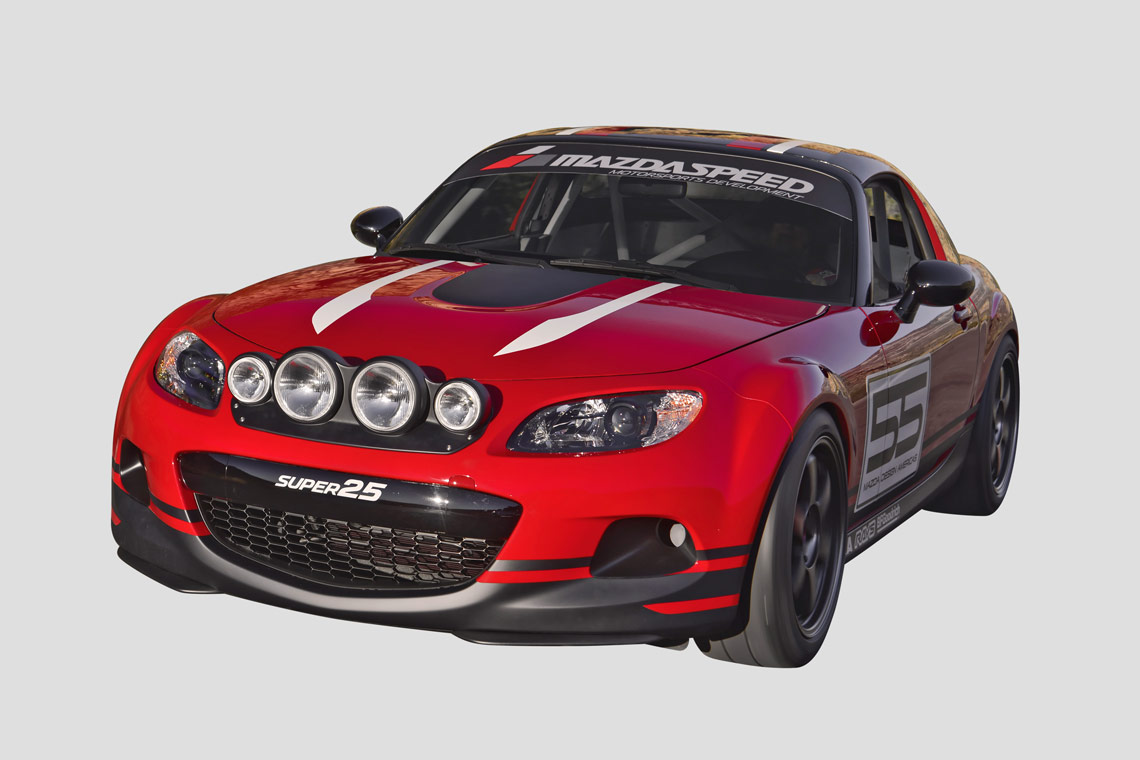 Mazda USA has built us Miata fans a new show car for SEMA 2012 as a follow up to 2011’s Super 20. What’s the deal with this car? What’s with the many eyes up front? Let’s look a little deeper.

I’ve read a couple of stories already in doing research about the car. What a crock of…! Not the car – the articles!

Here’s what is really going on with this car…

First of all, those lights

Mazda says they’re “PIAA 40 Series halogens on the inside flanked by 510 Super White Driving halogens on the outside.” But the point is, they are basically rally lights. The lights are not necessarily for dirt rally, but for conditions when an average set of lights just won’t cut it. Think, long and dark mountain passes during a road rally or driving on a dark track during a 24-hour endurance race. Think about it this way… You are racing for long hours on end, it’s 11PM on an unlit track, you have a Porsche on your tail and no time for a break and a latte. Think you need these lights now? I thought so.

The rest of the build

I’m not going to tell you the car is red and black and white. You can see that!

But what about the rest of the build? Well, quite frankly it’s pretty interesting. This is obviously a racecar first, pretty car second. While last year’s Super 20 had a very nice and compact roll bar under the hard top, this guy has a full cage – A lot more brawny than a simple street canyon-carver needs.

A single suede race seat replaces the pretty leather units in the previous car. The single seat tells me right away this is no typical rally car and more of a single person endurance racer. In other words, you don’t have a buddy reading you directions as you drive into the night. I’d like to think Mazda thought of everything and allowed the ability of fitting another seat, raising the suspension and adding dirt rubber if needed. After all, the lights are already there. However, for the tarmac it has 17-inch Volk Racing T37 six-spoke matte black wheels wrapped in BFGoodrich G-Force™ R1™ 225-45ZR17 tires. Hmm… That’s an increase from 205 to 225mm. I’m thinking… no supercharger.

There are other interesting bits about the MX5 Super 25. Here are a couple of things that jump out at me:

Now here’s my final verdict on the Mazda Super 25 MX5 Miata… In short, I like the Super 20 better. But only just so. It wouldn’t be a fair comparison as they are actually completely different cars. I hope the same team that designed the 25 also did the 20. This would just go to show how they can focus the Miata in any direction needed. Straight up racer like the Super 25 or extreme street like the Super 20.

The thing is, the Super 20 had something that many Miata fans could identify with. Unless you are actually a racer, you can’t really fall in love with the Super 25. The Super 20 had many of the things that MX5 drivers have been wanting for years… More power, a stiffer suspension, a more aggressive look and stance. It’s a car that many Miata owners could actually relate to. A car they would like to own. Heck, the car I would like my own 2011 MX5 to be! Now don’t get me wrong, this Super 25 is a one heck of a cool car. If the Super 20 never existed, this little red car would be king.

Now, the question is… Can it perform? We’d like to see it running. We’d like to drive it. On a track, were it belongs.

All photos courtesy or Mazda USA.

Now, go out there and read all the homogenized articles about the Super 25. Realize RallyWays is where you have to be. Then come back and subscribe. 🙂