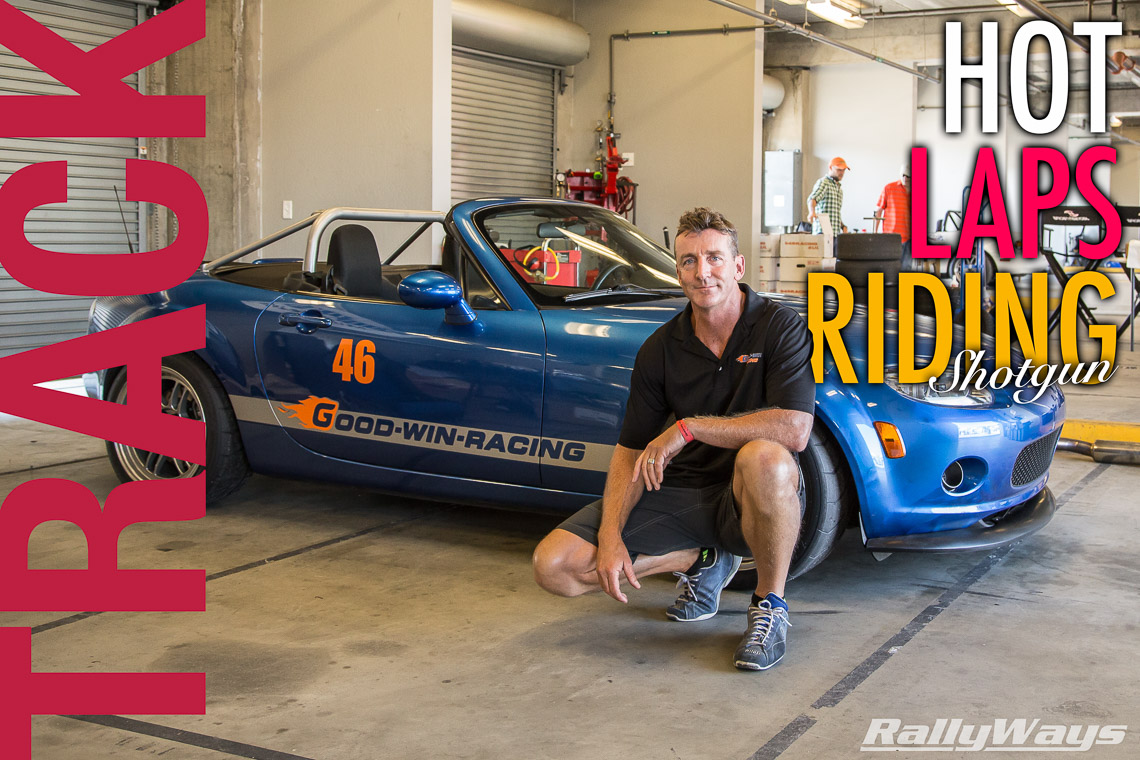 I had the opportunity to drive a parade lap at Mazda Raceway Laguna Seca in the RallyWays Miata during Miatas at Mazda Raceway 2014. It was a slow speed lap. Two actually. The highlight of the day were a couple of hot laps riding shotgun in Goodwin Racing’s street/track Winning Blue 2006 NC MX-5. 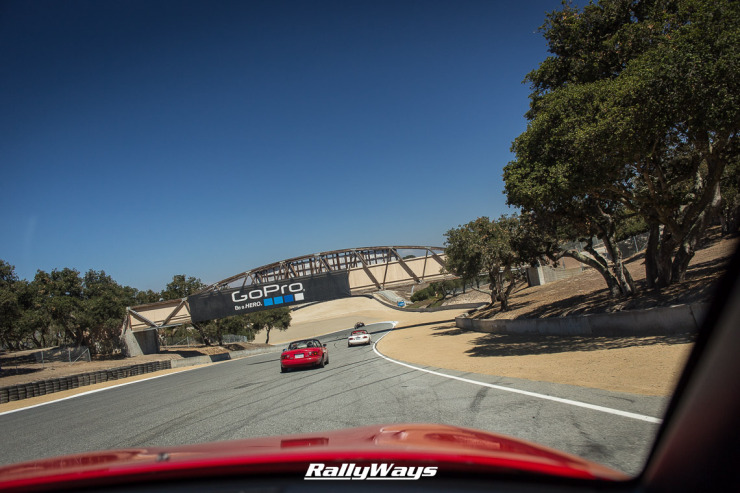 Driving the track for the first time was nice since it was a chance to carefully see this famous track from the inside. I was at Laguna Seca to cover the all-Miata event, Miatas at Mazda Raceway 2014, so I wasn’t signed up for track day hot laps. The opportunity came along to do a ride-along with an experienced driver. So I let go of my camera, grabbed a helmet and hopped into the passenger’s seat. 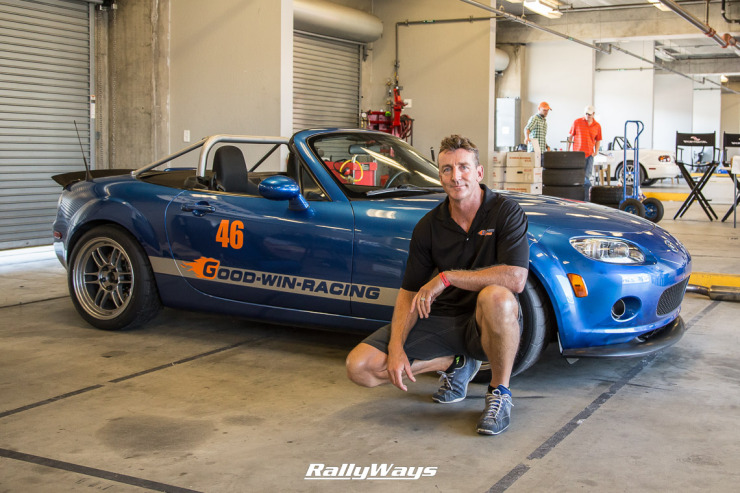 The driver is Brian Goodwin, owner of Goodwin Racing. The car is a 2006 Mazda MX-5 Miata in Winning Blue. It’s a street car with track mods aptly called, Project Blue. For a full build thread on this car go here.

Brian is a very experienced driver. The fact that I know that, and I know him, made me want to ride along in his car over any other car at MRLS that day. I also owned a NC Miata and I consider it a much more capable car than my NA. While Brian’s Project Blue is much more track-focused with its big brakes and braced roll bar, with just a few mods, any NC can become a beast of a car. This particular car is an outstanding machine with work done by Goodwin and Rocky’s Miatomotive. It made its debut at last year’s Miatas at MRLS.

Read our article on the NC MX-5 essential mods.

The hot laps ride along was in group A, the fastest group at Miatas at Laguna Seca. This group included experienced drivers from Flyin’ Miata, Blackbird Fabworx and 949 Racing. 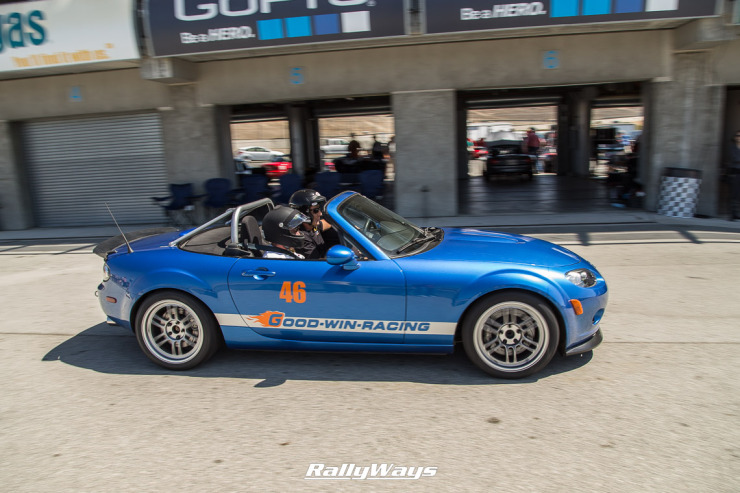 Helmet goes on and into the passenger’s seat I jump. We wait at the grid for an excruciating 5 minutes and Ryan Passey in the NA with the giant teeth beside us looks over and gives us a thumbs up. A minute later, they let us through and onto the track. Almost immediately, this little NC Miata completely blew my mind.

There is no roller coaster I’ve been on in my life that compares to this. A roller coaster is on rails. Here, you make your own rails with the lines you draw. Brian’s experience immediately became evident. He looks super calm. We have the top down. He has an open-face helmet, no gloves and just a pair of shorts and driving shoes. I could swear we looked like we were going for a coffee run. Except of course we’ve got helmets and we’re entering one of the most famous racing tracks in the world.

Immediately after we enter the track near the pits through this hole in the retaining wall that literally looked only wide enough to fit a Miata we were running in that car at 10/10 – or at least for me it was 10/10. Modded Miata on sticky tires and a driver with experience – I could not believe what this little car could do. Holy crap I was blown away! Having owned a NC Miata, I’ve very aware of the limits of grip of this car on stock rubber. Since I’ve never been in a car with track slicks I could not believe the G-forces I was feeling, yet the car still stuck to the track like you would not believe!

Read our article on why we like the NC more than the NA: NA Miata vs NC Miata 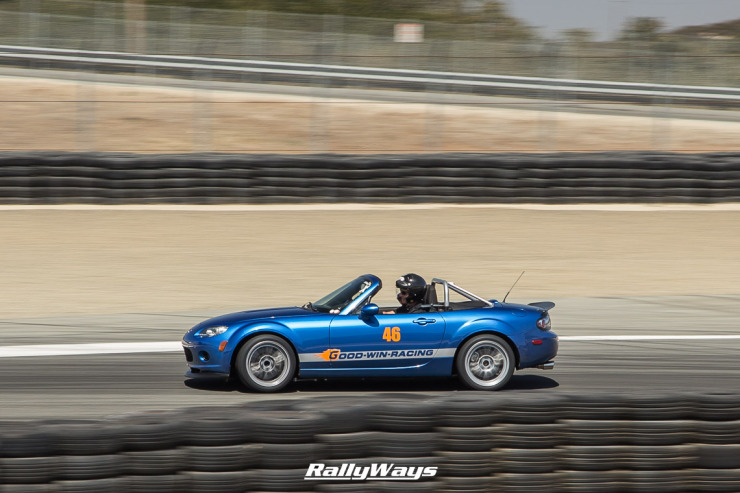 The G-forces were so much I was holding on as tight as possible while also trying to look like it was nothing. You know, trying to look cool and all – even though I was crapping my pants. If you have never been in a car in a situation like this you’ll feel like you’re about to blow right out through the door! The force is so much through some of these corners that you get the sensation the car is just going to flip sideways right over itself.

To the racecar drivers reading this, it might feel normal. But most of you are not race car drivers. Most of you have never been on a track in a car like this. I can explain it all I want using words like scary, exhilarating, unreal and awesome, however, there is really no way to describe the feeling and only living it would really tell the whole story.

Apart from what I considered insane speeds through the corners, I would often glance over at the speedo and see we were pushing over 100MPH right before some of the corners. I could see the wall of tires in the next corner and wonder when Brian here was going to brake. In many of the corners we were about a foot away from the car in front and super close to cars next to us on the outside of the turn. It was crazy to me really. But all these guys are experienced drivers. They all seem to know exactly where everybody else is and they can anticipate every other driver’s movements.

On the road, unless you are some crazy deranged redneck, you don’t tailgate someone at 100MPH with enough space between the bumpers for just a little bit of air.

Brian was hitting every apex like it’s nobody’s business. Sometimes pretty aggressively. I felt the car loosen up grip just once. Barely. One of the apex hits was hard enough to bottom out the suspension. Regardless, the Miata remain true and composed. The whole time I was thinking, “I never would’ve imagined this little car could do this!”

Earlier when I drove down the corkscrew at 25 MPH in my NA during the parade lap, I thought, “Oh this is cool. It’s like a very steep curvy driveway. This time, at full on speed it was a whole other story. It’s like jumping blindly into a pit expecting something will be there to catch your fall. 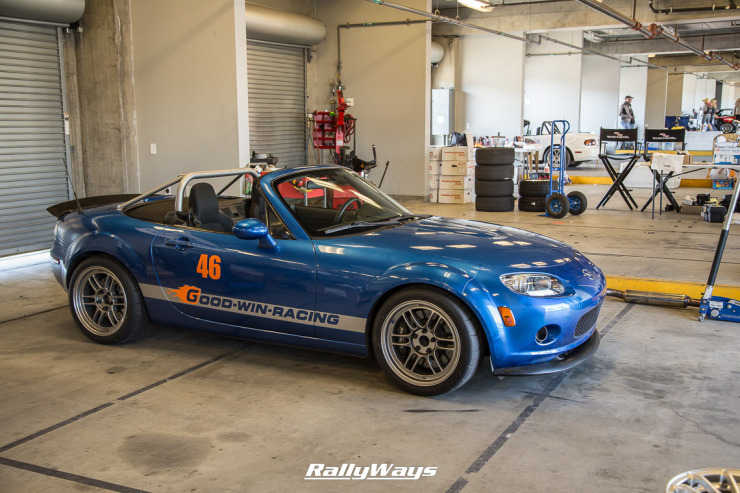 Now I laugh at those that have never been on a race track and say Miatas are slow. Yeah, those that claim you need a V16 and 3,000 horsepower and 335 wide-tires to go fast. Hahaha. You can give one of these guys a Ferrari or a Lamborghini and they wouldn’t know what to do with it on such a track. Then Brian comes along in a NC Miata with a stereo, a couple of mods and maybe 195 horsepower and blows everybody away. Just goes to show, a car is no good without a good driver. That “slow car fast” adage comes to mind.

The entire weekend at Miatas at Mazda Raceway 2014 was pretty epic. By far and wide, this hot lap ride along was the highlight of my weekend. Funny, I posted the photo above to the RallyWays Instagram as we were going to get on track. A friend of mine posted, “You’re in the wrong seat!” (Yeah, I’m talking to you Joakim. Lol.) But the fact is, I was in the right side. The correct side. I would’ve never known what these little cars are actually capable of had I’d been the guy behind the wheel.

For Miata-specific content, visit the Miata section of RallyWays.