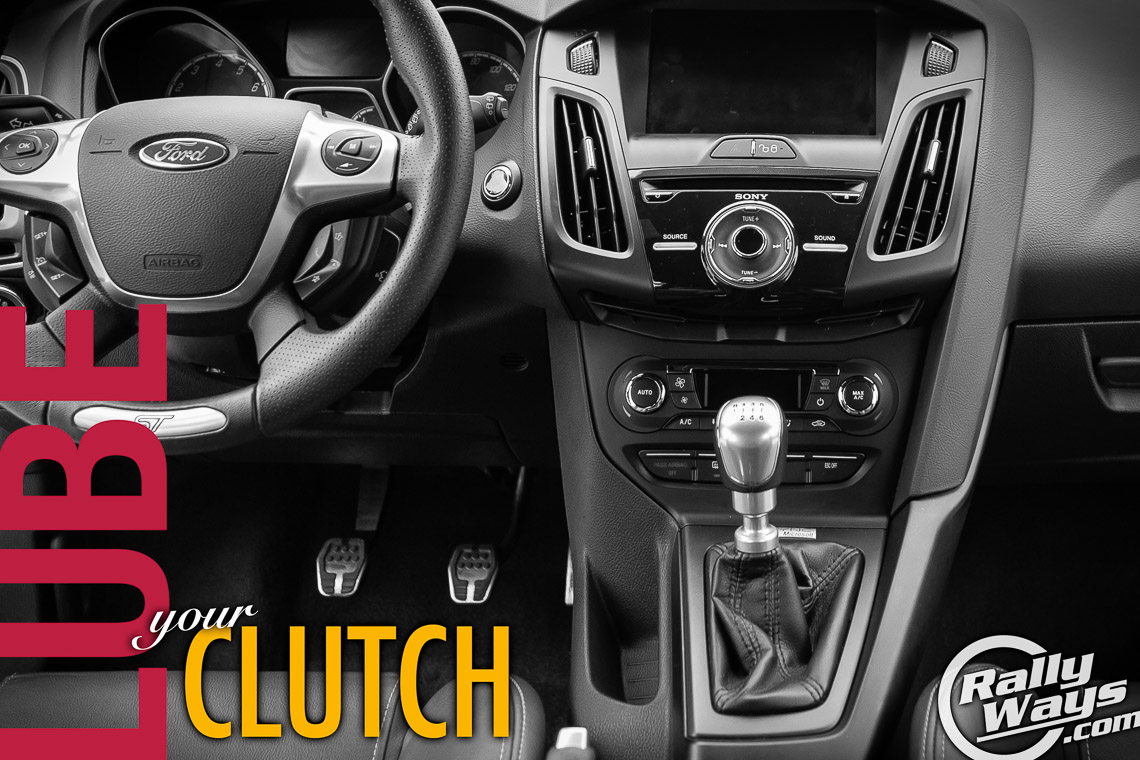 Do you have a squeaky clutch pedal? Or is it creaky? Or worse, both? More often than not, a noisy clutch can be easily fixed with clutch pedal lube.

At RallyWays we are all about driving with three pedals. If you need more reassurance as to why, see our story, “Should I Learn to Drive a Stick Shift Car.” We don’t think about it much or at all, but clutch pedals need maintenance too. Let’s talk about how to lube your clutch pedal.

Think about it though. The clutch pedal in our manual transmission cars see as much use at the gas and brake pedals. However, it is the only pedal that experiences the entire range of motion at every actuation. Because of this constant range of motion and the rather traditional mechanical nature of even today’s clutches (think springs and pivot points) they often develop creaks and squeaks over time.

For the longest time my philosophy about it was that a squeaky clutch pedal simply came with the territory. “I insist in manual cars, so I must deal with it.” However, something can be done about it.

In many cases, a car or truck that is still under warranty can be taken in to be checked if it has a squeaky clutch pedal. You can see a perfect example of this by reading forum threads such as this one on Tacoma World. In many cases, owners claim the car manufacturer has replaced the entire pedal assembly since sometimes the culprit can be bad pivot bushings. The problem is that in most cases, the creaks and squeaks come back. Because it’s not a case of bad bushings, but simply the fact that the parts where designed with incorrect or just plain cheap materials for the bushing pivots. The clutch spring can also be the one causing the noise.

In the end, car dealer service departments and savvy car owners like myself turn to lubing the clutch pedal assembly to solve the issue.

My 2013 Toyota Tacoma, stick shift of course, developed an annoying creak in the clutch pedal. It was not the usual squeak common to Toyota clutches, but rather a progressive creak that occurred around the last half of the throw as the pedal was coming back up. With my foot on the pedal and the creak noise being muffled near the firewall, it almost sounded like long slow fart. My wife would look at me like, “what the heck?” I had enough of it.

Since I’m paranoid of having my cars worked on even by the dealer, if I can avoid them tearing into my Tacoma, I will. So I took to the forums to find a solution. The solution was… LUBE. There is no such thing as specific clutch pedal lube – but rather lubes that are compatible with clutch pedal lubrication.

I used Liquid Wrench White Lithium Grease Spray on the clutch pedal of my Tacoma. You can find a link below to buy it from Amazon – click on the image to go to the product page or on the shop now link to add to your cart.

The Liquid Wrench White Lithium Grease took care of the creaking immediately. It has been six months since I applied it and the clutch pedal is still nice and smooth. I do expect it to need re-lubing soon. More on that in a second.

Do note, Liquid Wrench White Lithium Grease does contain petroleum distillates. This means you need to be careful and avoid it touching rubber. Petroleum distillates are not kind to natural rubber. That said, I believe white lithium grease is fine on plastic parts but I wouldn’t use it if there are rubber parts.

While the white lithium grease solved the problem, I found two things I didn’t like.

I put an old towel on the floor mats to protect them from drips when I sprayed. However, what I did notice is that the next day, when the sun hit and the truck warmed up inside, the grease ran and dripped even more. I had to get down there and wipe down as much as I could.

Another good option would be a silicone-based spray grease. I expect that stuff would be less messy than spray white lithium grease. I would also expect Liquid Wrench L512 Liquid Wrench Dry Lubricant with CERFLON could also do the trick. It might even be better than the lithium grease – but until I actually try it for myself, I’ll reserve the recommendation.

Time to re-lube the clutch

This is where it’s going to get interesting. They say, “If it ain’t broke, don’t fix it.” However, it’s time to re-lube my clutch before it starts creaking again. When I was working on the polyurethane suspension bushings in my Miata I found a great lube called Super Lube. The point with that lube is that it’s safe on plastics and most rubbers. It looks good. It’s clear in color. It also smells clean. It is more viscous than the spray lithium grease, but I expect it to be fine in working itself into the clutch pedal’s pivots and bushings.

I use the large Super Lube for the full size grease guns. The small sticks for the small grease guns are also very convenient since the gun can easily fit the tights spaces in the footwell. Also, if you don’t use grease very often, the small tubes for the small grease gun might be the best choice for you. Keep in mind that you will have to work the Super Lube in with your fingers or a small tool. You can’t just spray it on like you can with the Liquid Wrench stuff. I bought my Super Lube and grease gun on Amazon as well. See below – click on the image to go to the product page or on the shop now link below it to add to the cart.

To conclude, you don’t have to live with a squeaky clutch pedal – or a creaky one like mine was. You don’t have to assume you need a new clutch pedal assembly or new bushings. As with most moving parts, a good bit of the right kind of lube can solve most friction problems. Have at it.