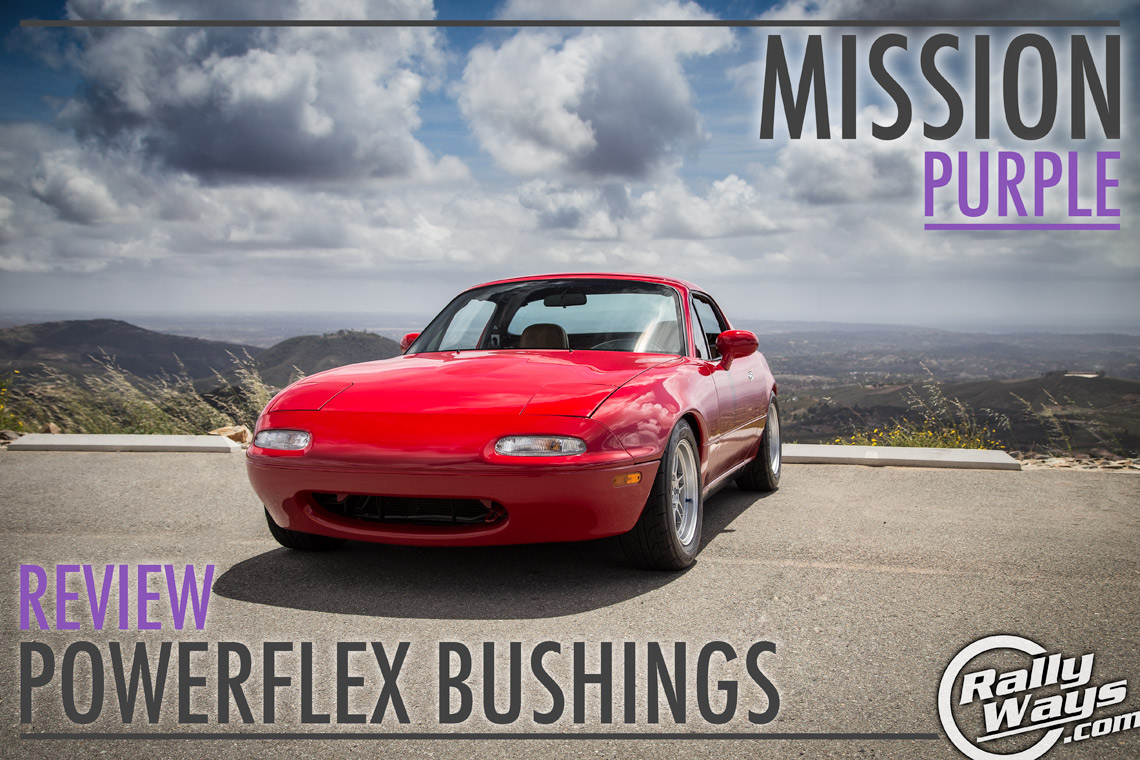 The project of installing Powerflex suspension bushings in the RallyWays Miata is now complete. Let’s take a look at how the car performs with a now official Powerflex bushings review.

Before we get started, here is the list of the Mission Purple project articles in order: 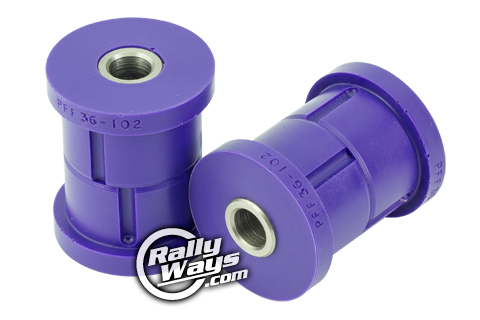 Part 1: Disassembly and Part 2: Installation are in the Miata Section of RallyWays for a reason – They are tech articles that go in depth on the intricacies of the project itself and don’t really belong on the main RallyWays blog. However, even if you don’t have a Miata, the overall project is relevant to any car really.

Before I started this project I was a little worried. I had read a few horror stories of poly bushing installation jobs in Miatas. Before I had even ordered the parts I needed I was starting to get cold feet about the whole thing.

Most of those stories were because of ill-fitting parts and increased noise, vibration and harshness (NVH). Some of those people that installed the poly bushings even went through the trouble of reverting back to stock. But like with anything else, there are many brands and you usually get what you pay for.

Now that the project is complete and I’m actually driving the car around I can give a properly educated review of Powerflex bushings. 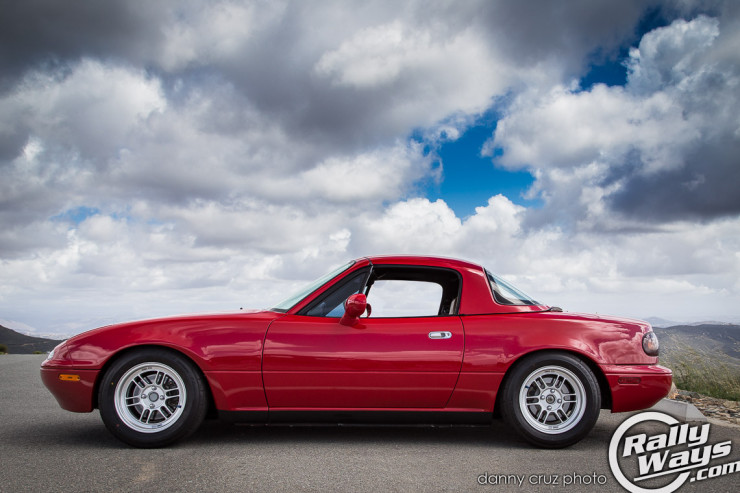 I’m happy to report that I’m 100% happy with the upgrade. All the Powerflex polyurethane bushings that I received fit perfectly in their designated locations. All of the parts looked high-quality and never did I have a problem during installation. You can tell that Powerflex put a lot of effort in making sure they don’t use generic sizes and that their bushes are perfectly designed for each car they support. Now, I’m not saying that there isn’t any overlap of parts where certain bushings part numbers might fit other cars – there probably is. But the perfect fit of each of the parts makes it seem like they were exclusively, and only, for Miatas.

As you would expect, I’ve lost any slop in the suspension. The entire car is sharper and more precise. The RallyWays Miata is definitely a better performer now. As much as this is going to sound cliché, the car definitely feels more planted now. I feel a little bit of that precision I had with my newer NC Miata. Where the little NA used to be a bit more cartoonish in the way it handled things, it now feels more grown up. Yesterday I pushed the little car on some mountain roads as far as I was pushing my NC and it performed brilliantly.

Of course, I’m sure you are all wanting to learn how it’s coping with NVH. Well, I can honestly tell you that I had to really think about it to notice a difference there. I had not driven the Miata for 2 months while I worked on this project. On the first drive I was enjoying the car greatly and I didn’t even think about NVH. Actually, it didn’t even cross my mind. Had it been noisy and harsh I would have immediately noticed. 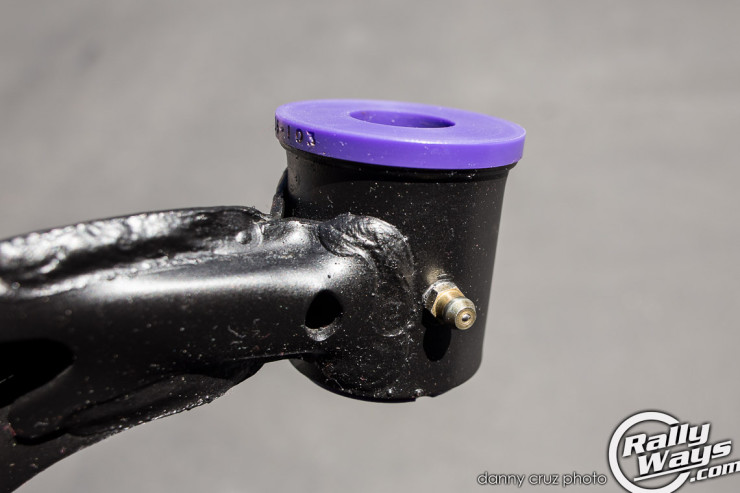 After driving the car a few more times I started noticing a few things in terms of NVH. There is no noise. Given I was generous in the application of copper anti-seize to lubricate the new polyurethane bushings, there were ZERO squeaks. Everyone says poly bushings squeak. Well, these are not squeaking one bit. I do expect that at some point in time they will begin squeaking – maybe after a year or more. Who knows? The nice thing is, since I went through the extra trouble of installing Zerk fittings to regrease them, I expect that correcting any future squeaks will be as easy as pumping some Super Lube into them via the fittings. But keep in mind, I haven’t pumped any grease into them yet and they are perfectly quiet with just the copper anti-seize.

On normal roads, I can’t feel any extra harshness. Even going over bumps, the car feels about the same as it used to. In fact, probably even better because everything is tighter making for less movement and less rattles.

…My Miata on Powerflex bushes is a grand tourer next to that thing.

There is one thing I can notice and it’s vibrations over a certain type of road. When I’m driving over very rough asphalt or concrete, the type that usually feels like a washboard, I can feel more vibrations than I did with the rubber bushings. The interesting part is, this only happens on these types of roads. Over most of the roads I drive on, even rough ones, the car feels just fine – perfectly quiet and vibrations are minimum, just like with the stock rubber bushes. It’s only on the type of roads that have that funny texture that increases vibrations where I can actually feel them amplified. And even then, it’s not a big deal. In fact, my wife’s slammed GTI drives way more harshly than this. She’s 35 and a mother and she somehow stands it. Not sure how. My Miata on Powerflex bushes is a grand tourer next to that thing.

All I can say is I’m very pleased with the levels of NVH as compared to the stock bushings. The increase in performance and precision is well worth the tiny increase in vibration that only seems to happens on really rough surfaces.

With the help of Powerflex polyurethane I was even able to get rid of other noises and vibrations I had on my car. If you remember from the intro story, I also ordered a set of four poly exhaust hanger mounts. These I used to replace the stock worn out rubber ones to help reduce rattles I was getting from the exhaust mid-pipe.

I’m still getting the ride height dialed in. As I mentioned in the previous installment, due to the loss in spring rate as a result of the removal of the twisting rubber stock bushes, the car sat a little lower. I was also eating up my available suspension travel sooner, causing some occasional tire rubbing on the plastic liner in the wheel wells. This was only an issue for me because the car was already very low, even before I started. A car that’s closer to stock height, or only slightly lower, will fare better. 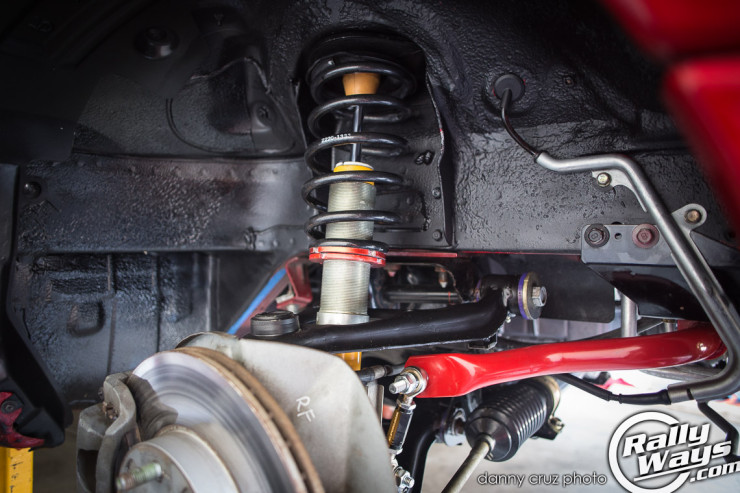 Using the adjustable perches on my Koni coilovers I raised the car a bit. First a 1/4.” Then again another 1/8″. I adjusted a second time because I was still too low after the first adjustment. By the second adjustment, the car was performing much better and I was hitting the bumpstops a little later. Now I only rub over BIG, BIG dips or bumps. Again, like I said in the previous article, I’m aware the spring rates on my coil-overs are just too soft. I knew this before I got started and it’s even more evident now. But I really felt that putting the car back on the road with the dampers and springs it had before was the best way to really gauge the performance of the new Powerflex poly bushes. If I had swapped out the coil-overs as well I would’ve been adding yet another layer of added performance that would’ve blended too much with the new bushes to give a good assessment of their performance. Now that I know how they perform, I can go and upgrade the coilovers.

Let’s wrap this thing up! 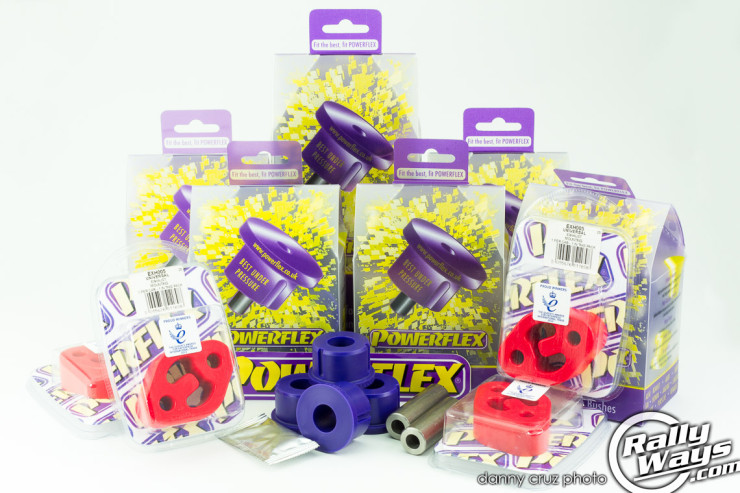 So that’s it! Mission Purple is a complete success! The Powerflex bushings review is a positive one by a long shot. I’m very happy I performed this upgrade. The RallyWays Miata is that much better for it. Not only that, but I learned a lot during the process and I feel I know the car much better now. I know every inch of the car’s suspension and how it’s laid out. Plus, if I ever were to do this again, say for a track Miata, I feel I could do an even better job in much less time than this.

If you have been considering upgrading your car to polyurethane bushings I can definitely recommend you go the Powerflex Bushings route. Not only did I find an increase in precision and tightness in my suspension, but the levels of noise, vibration and harshness are much better than just acceptable. Plus, they are purple. Yes, purple!