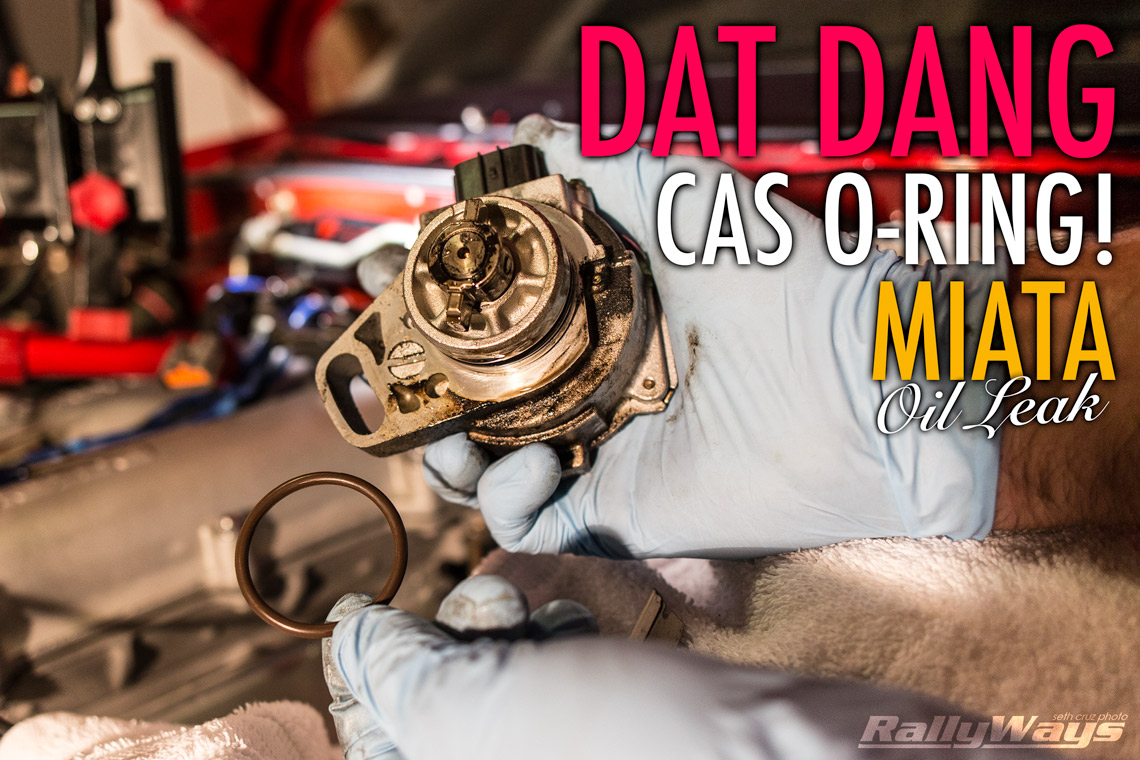 Your Miata might be leaking oil from the top rear part of the engine. This is actually a very common problem in NA Miatas. However, the nice thing is that it’s a relatively easy fix. Here’s how to easily fix the CAS O-ring Miata oil leak for good.

A few months after I bought the RallyWays Miata I noticed oil was messing up my perfectly clean engine bay. I was not happy about that. At the time I had no idea what may have been causing it. Since it was so high up near the back of the engine I immediately thought the valve cover gasket was leaking or something. I left it like that for a while but one day I decided to ask around. 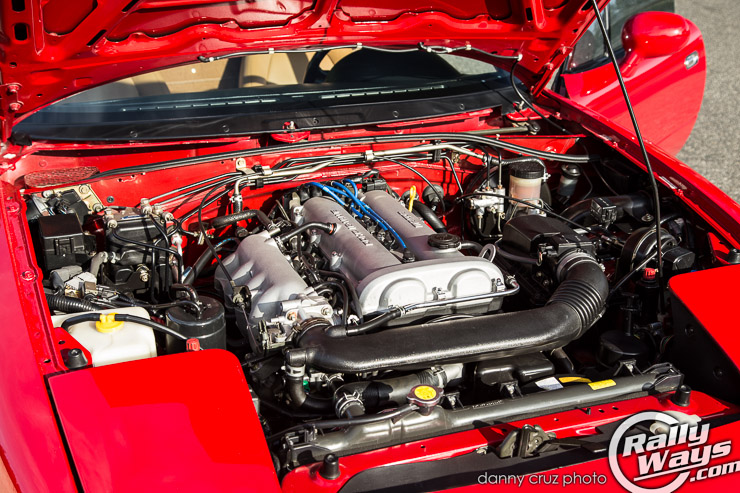 Turns out there’s a part right behind the valve cover that is called the “crank angle sensor.” Also known as the CAS. Apparently it senses the angle of your crank. My crank is always angled. Obvious enough. That part has an o-ring that is known as the “CAS O-ring” and it is known to harden and leak.

I looked at the service records of my Miata and it turns out the CAS O-ring was replaced only a few years back. More research led me to find out that the stock Mazda CAS O-rings are made of recycled rubber from used condoms and thus rot after just 3 days causing the oil leak to start all over again.

Turns out that fixing the problem is so easy, my mom could do it. Not really. She can’t drive stick-shift. But my wife could do it. I bet she could.

Anyway, I read a few tutorials on how to do it but almost all of them left me more confused than when I started. It’s really much simpler than they make it out to be. So here’s what you do. 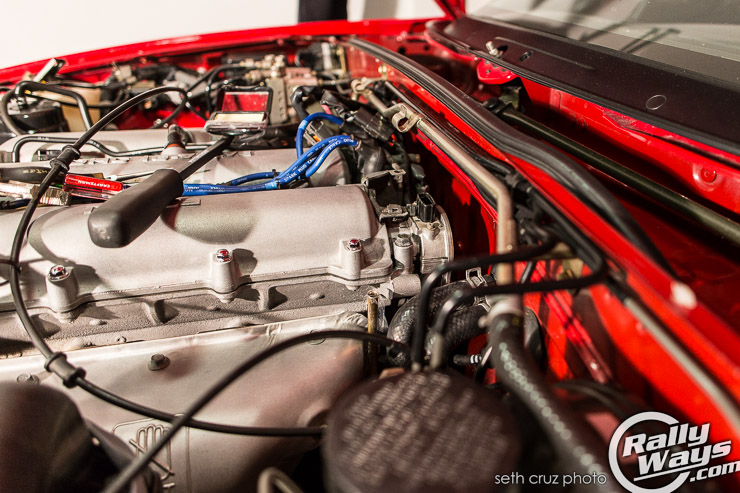 1. Find the CAS. It’s behind the one of the cams. Move the ignition cables out of the way if they are. Move the long cable that’s clipped over the back of the engine to the firewall. Zip-tie it out of the way. 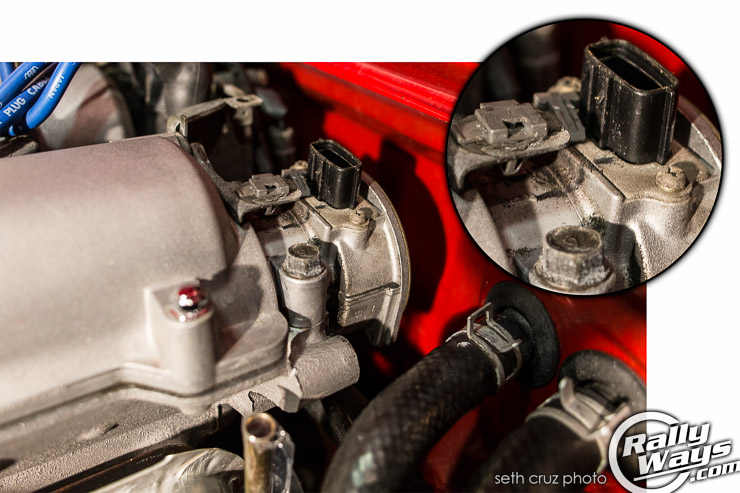 2. Mark the housing of the crank angle sensor with a pencil. To do this, draw the line on the housing itself and connect that line to the engine itself to mark the position of the CAS. It needs to be in this exact position when you put the bolt back in and torque it.

3. Disconnect the CAS plug from the housing in the CAS. Move it out of the way. I had already done this before the series of photos. Be careful when you do this. I broke the retainer clip in the plug when undoing mine. The heat had made it pretty brittle. Luckily, I got a new one from the folks at Miatamecca on eBay. Thanks by the way.

4. Loosen the 12mm bolt in the back with whatever length socket and wrench combo you can fit in the tiny working space. Remove the bolt and set aside. 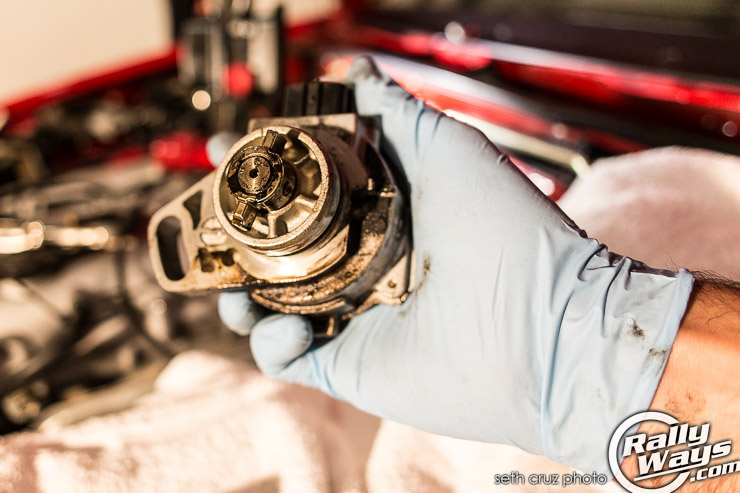 5. Gently pull the crank angle sensor out and draw a line with the pencil in the inside, in the now exposed part to help identify orientation. To be honest, I’m not sure why this is necessary as the outer line for me was enough. But just to be sure, just in case messing with that can actually screw up the engines timing, do it.

6. Note the orientation of the little winglet part inside. That part has a groove at the end on only one side. Note that position and make sure to install it back in that position. A good idea is to use the pencil to mark the housing with the position of the little winglet tangs. It will only go back in if the position is correct. Just to be sure, be careful and don’t move anything. There’s no reason to move anything really. 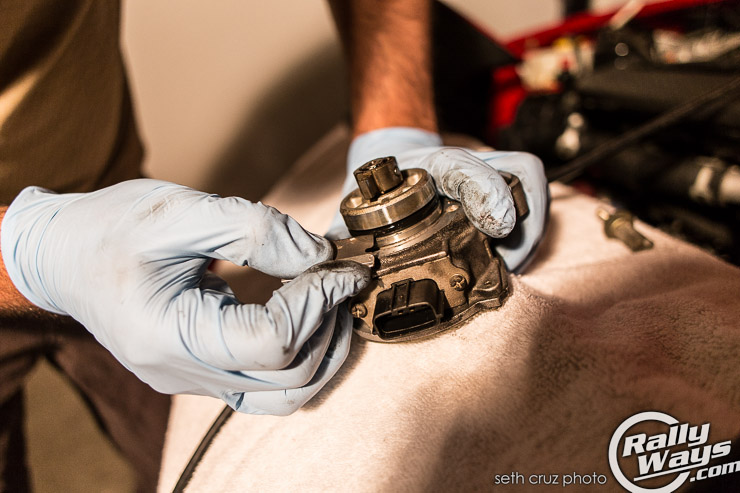 7. Take a sharp razor blade and cut off the old CAS o-ring made out of recycled used condoms from the crank angle sensor housing. It will be flat, hard and dry. No wonder it’s leaking. 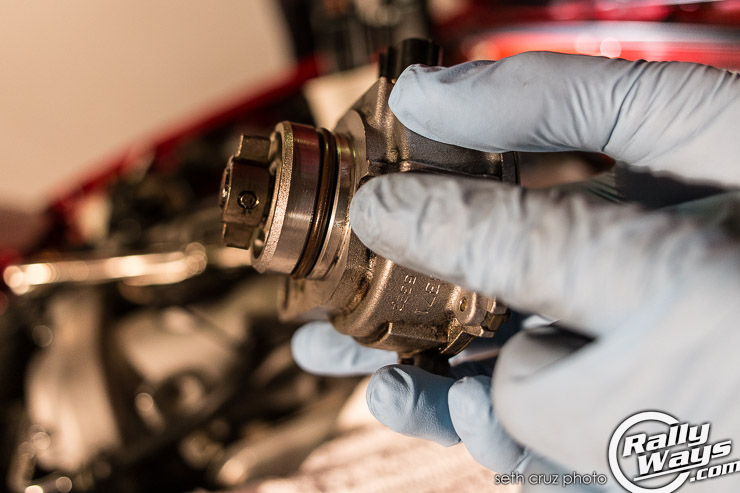 8. Roll the new brown Viton O-ring onto the part making sure it’s nice and smoothly placed. Lube it with a bit of oil from the hole the CAS was in. Latex gloves are a good idea. Depending on the how long you had that oil leak, the heater hose right under the CAS in the 1.8 engines might have been rotted away by the hot oil. You might want to replace that part as it can only really be done after you remove the crank angle sensor. I did buy the part, but after removing the sensor I found the line was fine so I left it. You don’t have to buy the genuine Mazda one. This one right here is pretty much all you need. (Gates 18937 Heater Hose.) 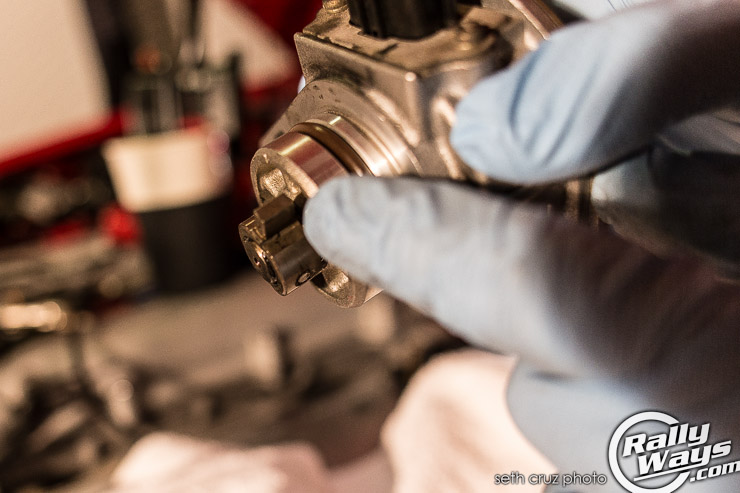 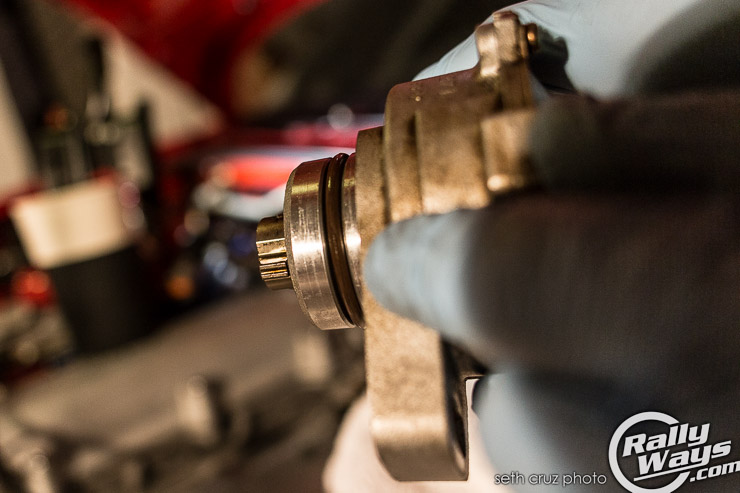 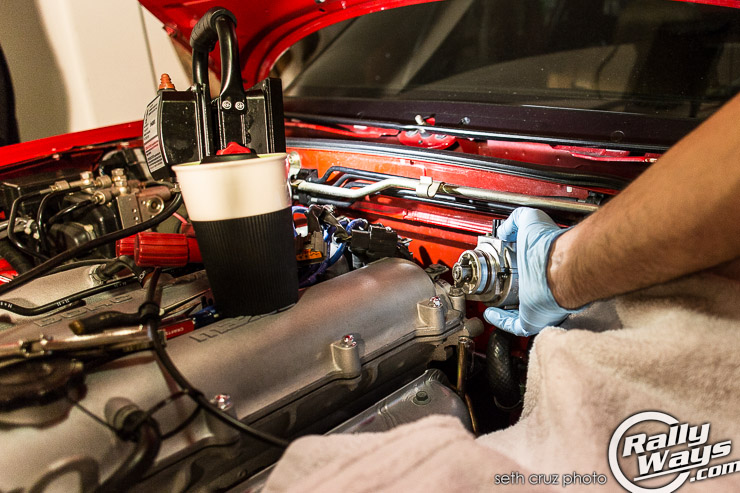 9. Line up the winglet and the CAS to the marks you made earlier and insert. If you didn’t move anything out of place and the marks were done correctly, the part will go back in with just a tiny bit of wiggling. I heard stories of others taking a half hour to insert back into place. I suspect they screwed up and moved something in the process. For me, it went in almost immediately. 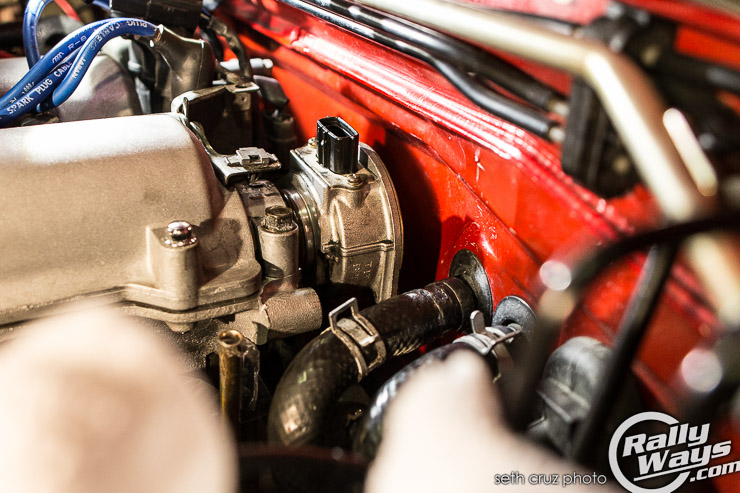 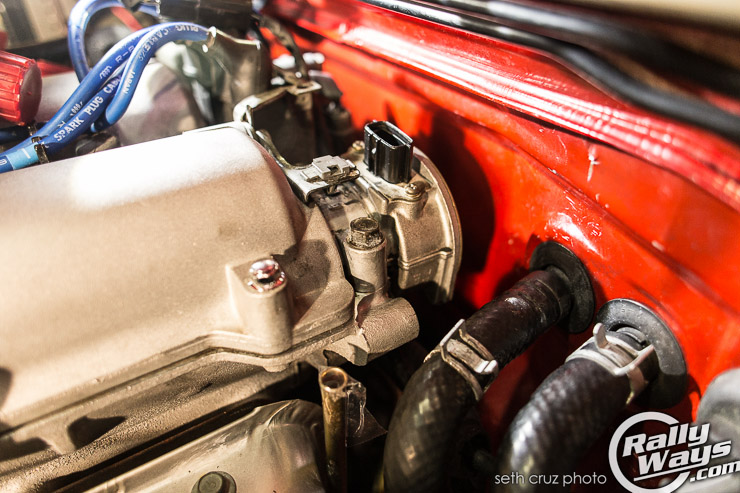 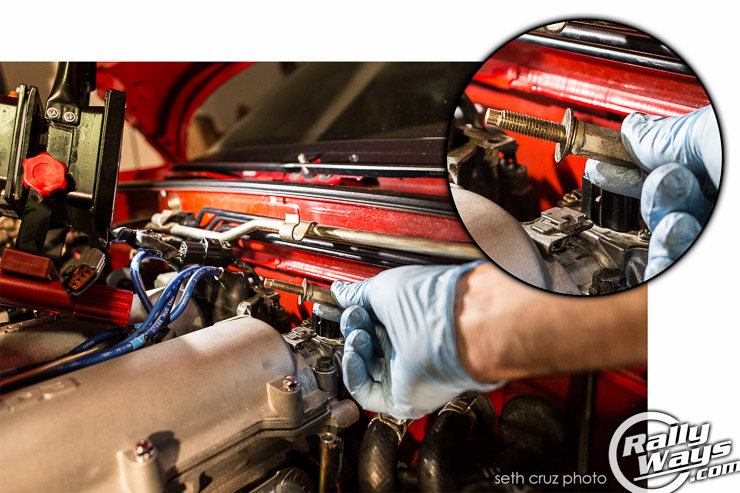 10. Once the CAS housing is back in and you are sure there is no gap between it and the engine, insert the bolt back in and torque down.

11. Connect the CAS plug and put the everything you moved back in place. Might be a good idea to clean up the oil left over from the leak. This can be all over the back of the engine and over the transmission.

12. Go for a spirited drive and when you come back check for leaks. I was confident in my repair so I cleaned the engine completely before I even set off. I’m happy to report, no more leaks.

If your Miata’s oil leak was there, and only there, you should be in good shape. This is the most common spot anyway. If the Miata oil leak was actually elsewhere, or you had more than one leak, such as the cam gasket itself then you might be in for a little more work. It seems though that in most cases the CAS O-ring fails before the cam gasket does. Note that the instructions above are for the Mazda Miata NA8, 1.8 liter engine. However, I hear that the 1.6L is not much different. Only the CAS is on the other cam.

As you can see, the language in this tutorial for repairing the infamous CAS O-ring Miata oil leak is not technical in any way. I’m not a mechanic and I make no apologies about it. I’m just handy with tools and common sense. The plus side of this is that with the exact instructions above I fixed the problem and the RallyWays Miata is running better than ever.

For more Miata-centric articles be sure to check the entire RallyWays Miata Specialty section. of this site.