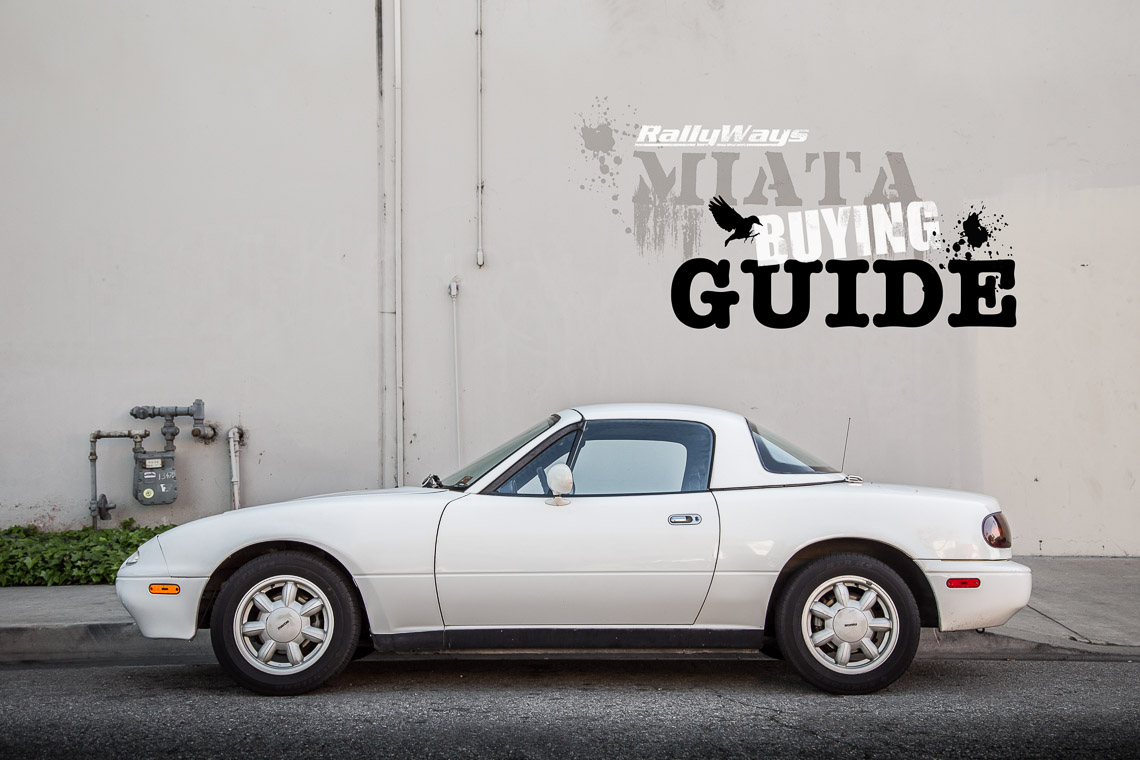 I recently had a buddy from my high school days email me with a picture of a Miata he’s thinking of buying. Given he knows I’m a Miata fan, he wanted to know what I thought of the car.

That got me thinking. I know a lot about these things. Maybe I should write a post about what to look for when buying a Miata. So that’s what I’m doing. Don’t take this is the absolutely Miata buying guide. That would be too long an article and I’m just not writing such long a piece right now. Think of this as a MINI Miata buying guide. That works.

I’ll do it in a topic checklist form to make it easier to go through.

Check what’s working and what isn’t. This will give you a rough idea if the guy really took care of it or not. A little niggle here and there is fine, but too many broken things will tell you the previous owner just let things sit without fixing. This is key I believe. Because whether it be a result of lack of budget or just carelessness, it could come back and bite you later. Miata’s are reliable, but they are still machines that can break. 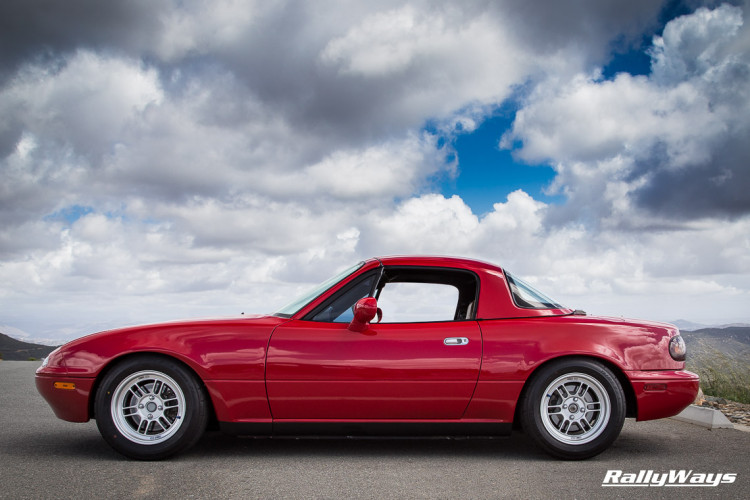 Don’t be put off by a re-spray. Quite honestly, Mazda’s paint on original Miatas is a bit crappy. They don’t have clear coat so they are prone to fading over time. For this reason, many are repainted. It doesn’t necessarily mean the car was wrecked at some point. For this reason, what you want to look for is a decent paint job. Look for overspray and other indications of a careless job. In the end, if you like the look of the paint, that’s all that matters.

My Miata has a respray on the front half. That said, everyone asks me if it’s original paint because it was done really well. I have no problem with the paint on mine. Quite honestly, I prefer it to the stock paint in the back. For a look at my car check out the RallyWays Miata. 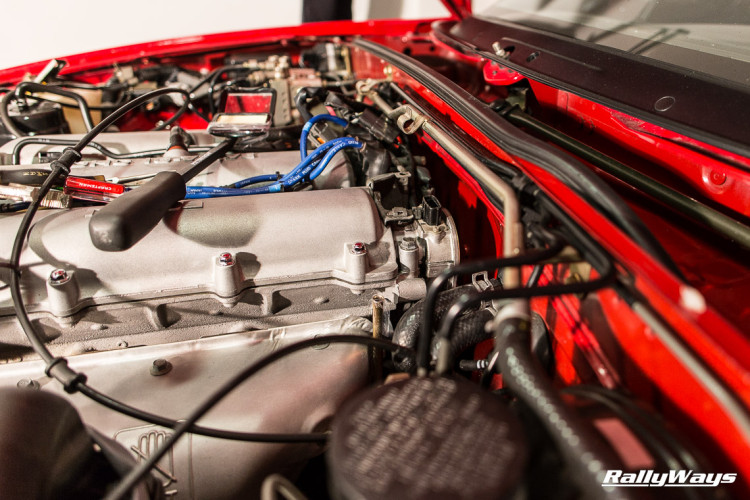 Miata engines are very reliable, but yes they can often leak. Look around the engine compartment and see if you can spot any. Oil leaks towards the front or middle section of the engine might indicate a problem you really need to worry about. If an owner doesn’t pay attention and a part of the cooling system goes bad, they can overheat and burn the head gasket. I’ve seen it happen more than once.

Miatas are well known to develop a leak at the CAS – That’s the Cam Angle Sensor. Look for leaks at the very back of the engine starting at the top behind the valve cover. You can also look under the car as leaks there will drip down onto the transmission. Fear not if you find this though. This is literally a VERY easy fix that anyone that can work a wrench can fix in an hour. We have a how-to guide on how to fix this. See it here: Miata CAS O-ring oil leak.

Check the condition of the dust boots on the front suspension. Look for the upper and lower ball joint boots as well as the tie rod ends dust boots. More often than not those will be shot and leaking grease. You can replace the dust boots alone but sometimes you have to replace the ball joints themselves. Mazda genuine parts are not the cheapest. Not to mention, taking apart that front suspension is a bit of a pain, so you have to keep that in mind.

Check the shift turret for play. Make sure the play is not too excessive. You should be able to tell what’s sloppy and what’s acceptable. When you are doing your test drive, check that each gear engages nicely. Also, when driving at high revs, check that it doesn’t pop out of gear, in any gear. Of course, check for grinds and noises too. 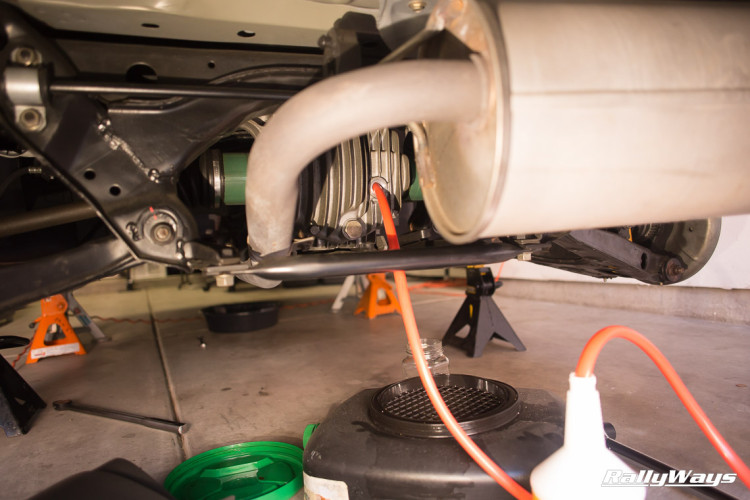 Look closely in the photo above and notice the cooling fins. That’s a Torsen LSD differential being serviced with new gear oil.

The rear differential in a Miata can be an open-differential or a limited slip differential (LSD). Early 1.6L Miatas that had an LSD used a viscous-type LSD. The follow up cars with the 1.8L can be had with a Torsen differential. The Torsen unit is much better than the viscous differential in the early cars. Either way, having an LSD is a good thing, so look for it when checking a candidate car. The LSD differentials can be distinguished by the cooling fins around the unit. An LSD can be added aftermarket, but they’re not cheap. For this reason an LSD can add quite a bit to the value of the car. 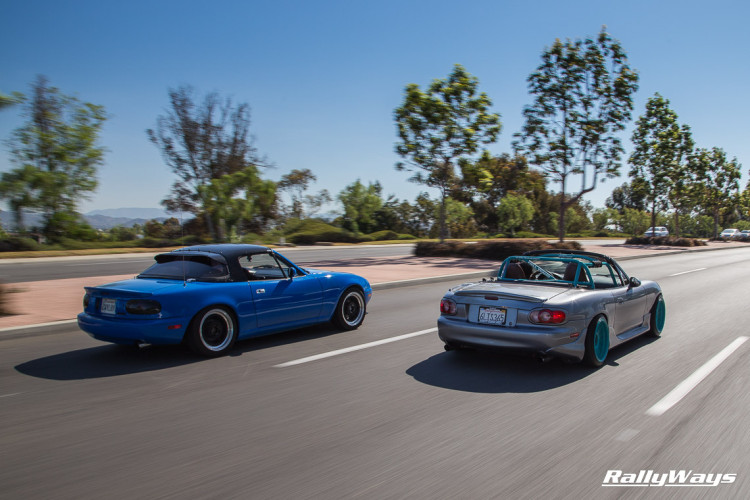 The presence of Aftermarket parts is normal on a Miata. You might want a stock car, but these days those are getting harder and harder to find. What you want to look for is the quality of those aftermarket parts and whether you can live with them or not. One good thing to look at is suspension upgrades. If the car is running some Megan Racing or Raceland coilovers, you can probably figure the previous owner was more concerned about just slamming the car than overall quality – or maybe the budget simply wasn’t there. But if the car is running better coilovers such as Bilsteins, Konis or any other matter of good parts, it’s a good indication the previous owner was more serious about quality. This doesn’t mean a car on Megans is crap. What it means it the previous owner might have had a better budget to maintain the car as well.

This one’s simple. If the Miata comes with a factory hard top add $1000 to the value of the car. Those things are highly desirable. More so if the color matches the car.

Of course, this one’s a given. It’s a convertible… You HAVE to check the condition of the soft top. Look for tears and rips. But more importantly, look for the POTENTIAL for tears and rips. Those are the ones you need to worry about because you might be paying for a top with no holes and end up with a top with holes 3 months later. If the top is not that great, keep in mind you can find them for sale pretty easily. Figure around $300 for just the fabric and $600 for a full top with frame. A full $850 can get you a nice used top with the frame and all the seals and latches.

There are really tons of other things you want to look at when inspecting a Miata to buy. Also, don’t be afraid to ask questions. Even if the seller is hiding something you can kind of make it out by asking different questions.

Do realize there’s only so much you can do yourself. If you really want to be sure, schedule an appointment with a trusted shop. If it’s a shop that specializes in Miatas, even better. This car’s really popular. You’re bound to find a Miata shop in your area. 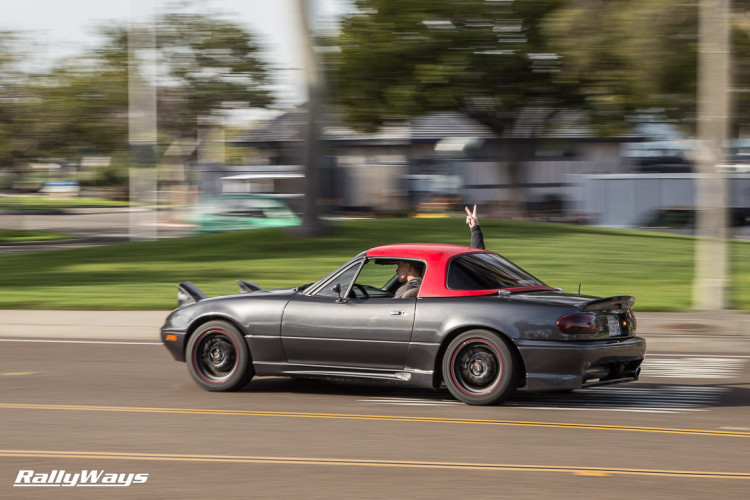 Buying a Miata can be a fun experience but it can also be a frustrating one. There are tons of Miatas out there and many can be pretty ratty. It’s not like shopping for a rare Ferrari where every single one you go look at is gorgeous. In car like that you’re more concerned of really expensive drivetrain parts breaking that could bankrupt you. In a Miata you’re looking for the best example you can afford. When shopping for a Miata, you have to take your time to weed out the bad ones and find the gems. There are still many gems out there. Go out and find yours. Peace.