It’s always risky putting on a car show in the middle of winter in SoCal. That is, if you can call what we have, winter. The HG Motorsports Open House marked the opening of our car show season, a tad early.

I’m writing this thing two days later and guess what? It’s raining. HG Motorsports Open House though was nice and dry. It was also unusually warm even by SoCal standards.

Check out the gallery below with images from the event before you continue reading.

The show had a real “homey” feel to it really. HGMS had a full house and the lots around the facilities where overflowing with amazing cars. However, it felt like the entire tight-knit car crew of San Diego and Orange County was there. Familiar faces all around.

Some people I had only seen a few weeks prior, while some others I hadn’t seen since before the holidays. Honestly, I spent a lot more time talking to people and saying hi than shooting pics. Somehow I managed to grab enough shots for this story. 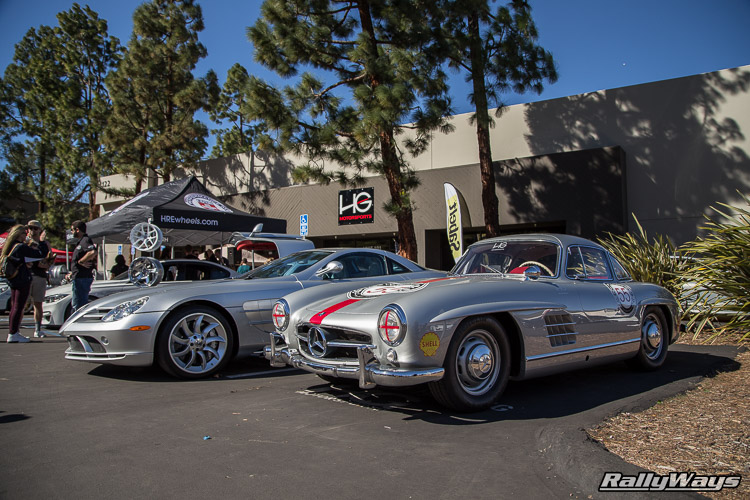 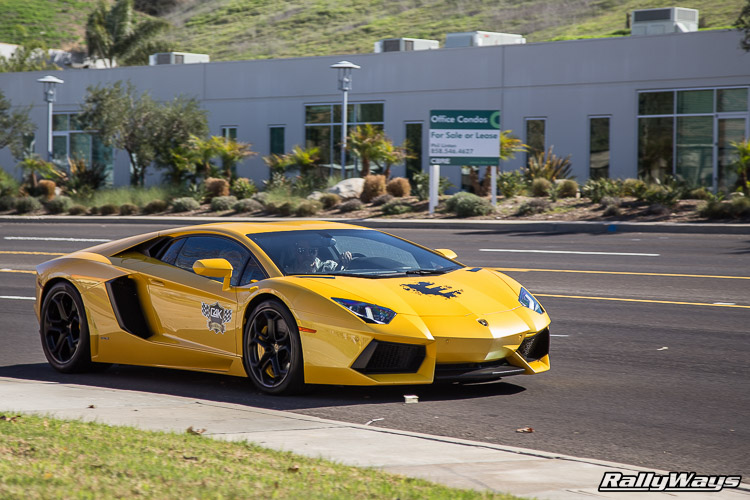 HG Motorsports was showing their new and improved facilities. Dieter, the man in charge, gave me a quick tour of the place before being surrounded by yet more people wanting his attention. There’s a full section for OEM work on stock street cars. There is also a section for more time-consuming customization work and even race car building. In tune with that, they have a dyno to test the work done right in-house.

HGMS is not new to fabrication. They build many of their parts in house. They also fabricate roll cages and roll bars for a myriad of applications.

HG Motorsports is well known for their work on Mercedes, BMW, Ferrari, Lamborghini, McLaren and Porsche. The experience doesn’t end there though, HGMS has dealt with some very intricate projects for the Mitsubishi Evo, Nissan GT-R and even the new Tesla cars. 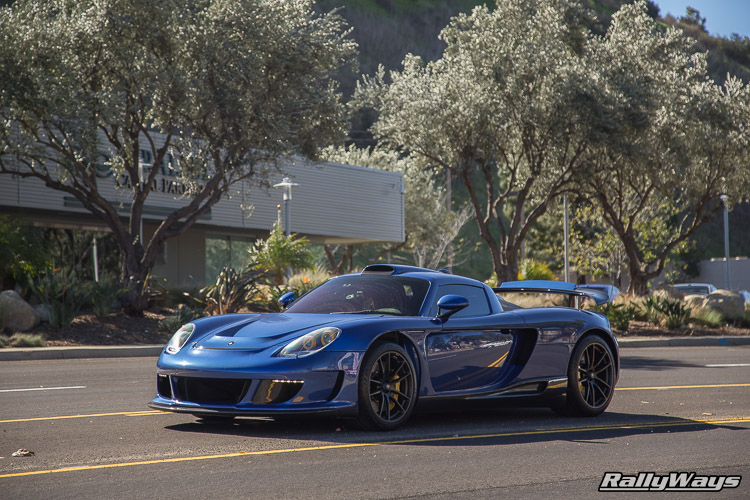 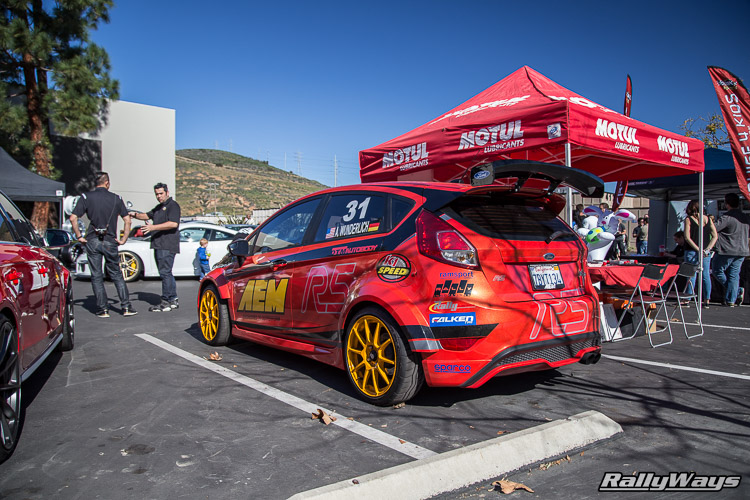 The community was out in full force and having fun. The cars were amazing as is usually the case around here. Some awesome standouts were the blue Gemballa Porsche Carrera GT, HG’s own Mercedes-Benz 300 SL Gullwing and a stunning McLaren-Mercedes SLR. One of my personal favorites was the Molten Orange Ford Fiesta ST R5 rally car wearing parts and endorsements from COBB Tuning, AEM Intakes, Rally Innovations, K1 Speed, Stop-Tech, DTM Autobody, Baja Designs and a host of others. Ever since I had the Ford Fiesta ST tested I became enamored with the little hot hatch. Hint – expect more Fiesta ST stuff. Yes, I spent a lot of time carefully inspecting and photographing this car.

Stealing the show was Stan Chen’s Toyo Tires #VonDoom BMW F31 3 Series Touring Wagon, estate, shooting brake or whatever you call them in your area. (See the cover photo) This thing is unreal. We love wagons around here and when one as cool as the current 3-series is cranked up to 11, even more.

I love the Thule box on top too. I worked for the Thule distributor in the Caribbean, Velauno, for many years so I have quite a bit of love for the brand. I’m looking at Thule for the racks for our next project build coming up. The box looks like it was made for the F31 as well. 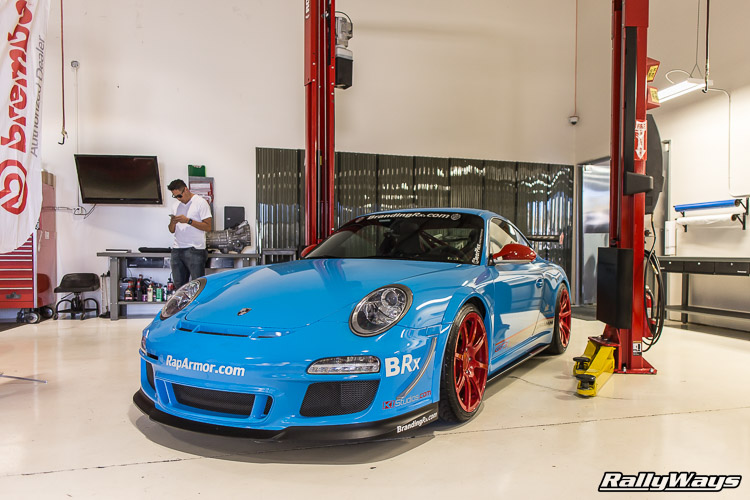 Gus brought his bright blue Rap Armor/Auto Porsche 911 GT3 with KI Studios wrap. JMFP Garage brought a gorgeous Ferrari 458 previously seen at the HRE Open House. Southpawww Brandon Watson from BMW of El Cajon had Sabine, his E36 track car hanging out inside the facilities. Good to see cars like Brandon’s. Same thing goes with cars like Michael Lewis’ BMW 335i sedan race car. Both are cars built up by HG Motorsports. In fact, Michael’s car was in the middle of some major surgery getting tons of work done as well as the most amazing roll cage money can buy.

There were plenty of DJI Phantom drones buzzing around the show. I have to bring out the RallyWays Tricopter for the next show to grab some aerial photography. I’m currently updating a few things on it. It’s getting new speed controllers, new wiring and updated firmware for its Open Pilot CC3D flight controller. I’m also adding a Sony PZ0420 FPV video camera and an Immersion RC 600mW 5.8 Ghz video transmitter in order to frame my shots while flying FPV. Also looking, of course, at the new GoPro Hero 4 camera for the HD video. 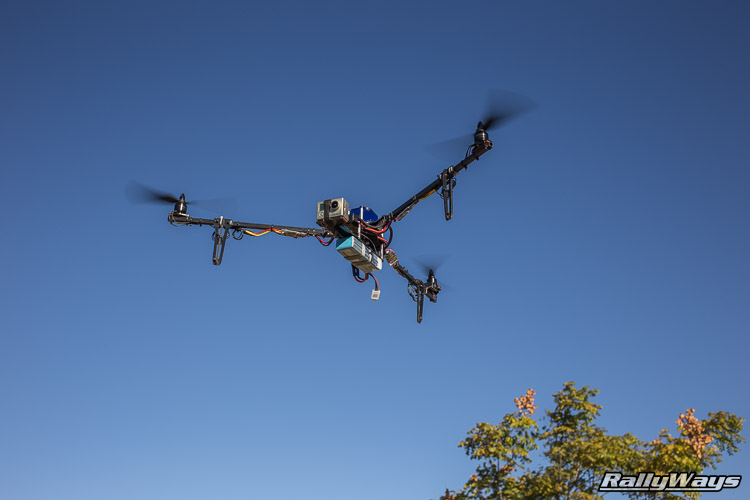 While I did shoot some video and stills from the air at Big SoCal Euro 2014, I was flying line of sight. The plan to go FPV (first person view) has been in place. However, with drones being under so much scrutiny lately, I want to be perfectly legal. In order to transmit a 5.8Ghz, the frequency mostly used for FPV flying, one needs a HAM radio license. I wasn’t about to take any risks so I took the time to study for a few weeks and passed my HAM tech exam getting 34 out of 35 questions right. Now with my license and call sign I can be fully legal. There is a little more about this tricopter on FloatWays, our sister site.

The car show season is only just starting in Southern California. If the HG Motorsports Open House in an indication of what’s coming in 2015, we’re looking at a very exciting season of cars. See you all out there.