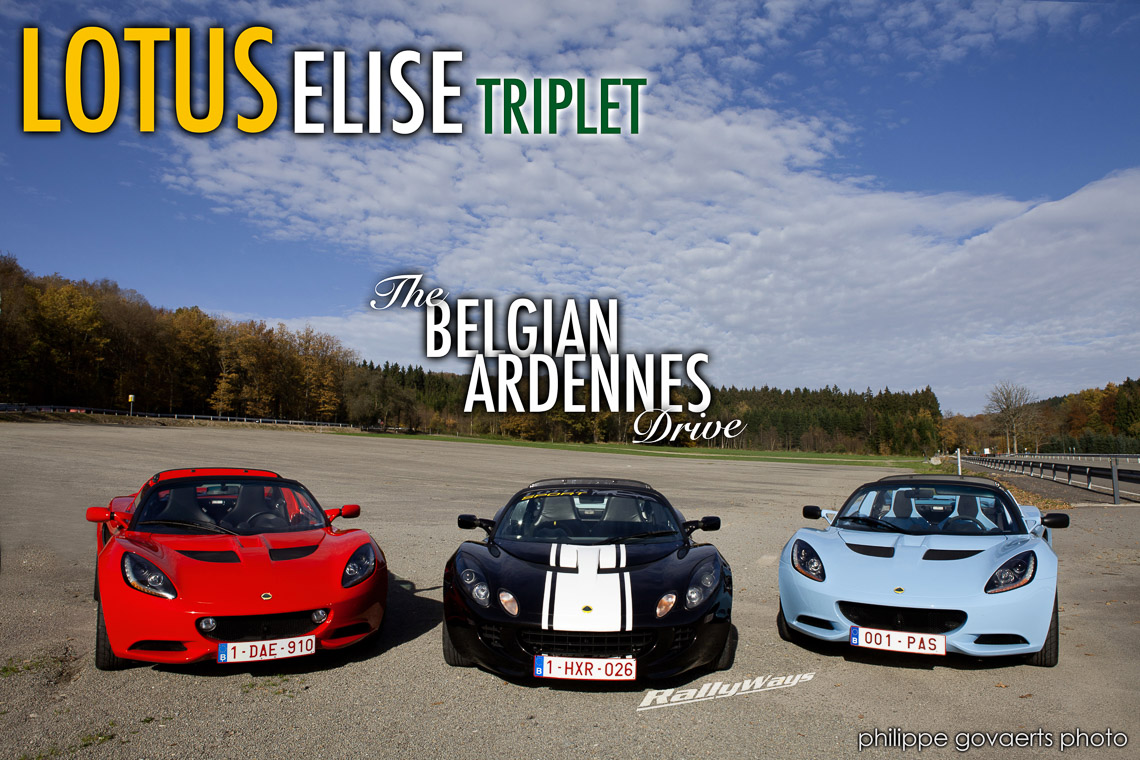 The Belgian Ardennes Drive – 4300 square miles of forests, rivers and valleys, small towns and phenomenal driving roads with little traffic. Combine all of that with a couple of cool Lotus Cars and some friends, and you get a tasteful recipe for a great day out.

For us, petrolheads, nothing beats a day of pure driving pleasure after a stressful week at work. That’s why I decided to organize a day trip to The Ardennes in Belgium, the Colin Chapman way, with a couple of friends and of course their Lotus cars. The lineup for this story consists of three Elises, though completely different from each other. 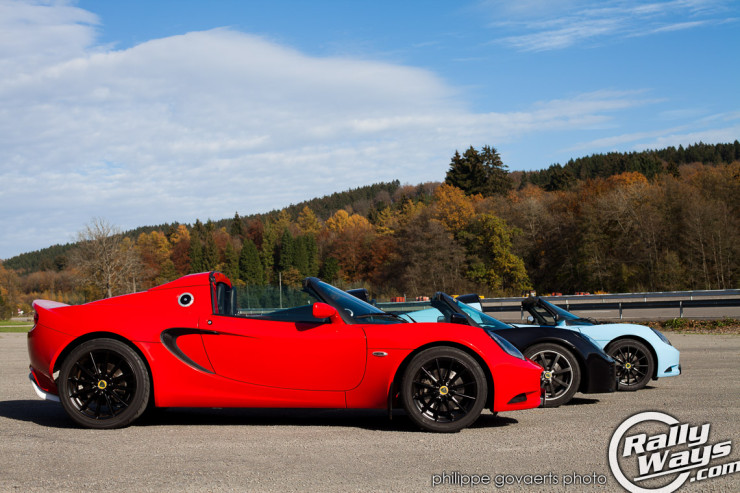 I like purpose-built cars a lot, and a Lotus Elise is a very good example of that. While most manufacturers build big engines with lots of horsepower for their performance cars, Lotus uses rather small engines (even by European standards) but reduces the weight of their cars to the bare minimum by using aluminum and a lot of composite materials.

Let’s look at the Lotus triplet we have here… 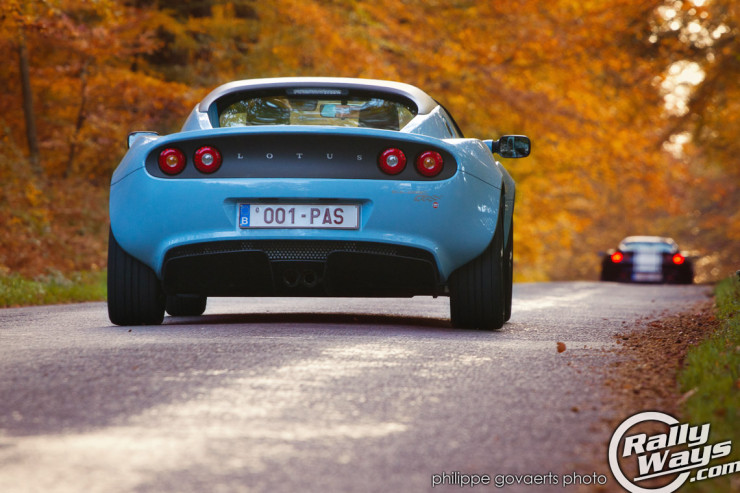 Let’s start off with the 2012 Elise Club Racer in the CR-exclusive color Sky Blue, owned by my good friend Pascal. I’ve known Pascal for several years now, and as a born sports car fanatic, he’s owned well over a dozen different performance cars and motorbikes. Somehow along the way, he fell in love with the Lotus Cars brand and what they stand for. From a variety of Elises, a supercharged Exige and an Evora, he has driven and owned all of them. With all his passion and experience with cars, there is no doubt that he is one of the finest drivers I know.

The interior of the Club Racer breathes motorsport. From the beautifully crafted and painted GRP racing seats to the bare aluminum floor and CR-embroidered floor mats. This more Spartan version and special edition of the Elise uses the same 134BHP 1.6 liter DOHC 16V engine of the standard Elise, but Pascal chose to add the additional power pack and performance pack which adds a little bit more horsepower and responsiveness. The car has some more special features like Bilstein dampers, an Eibach anti-roll bar and a limited slip differential. Being a Club Racer means it is also a bit lighter (-19KG) with a total weight of 857 kilograms due to the absence of sound proofing and the usage of a smaller motorsport-type battery. The Elise Club racer is a blast to drive on public roads during your weekend trips, or you can go flat-out on your favorite racetrack during trackdays as well. 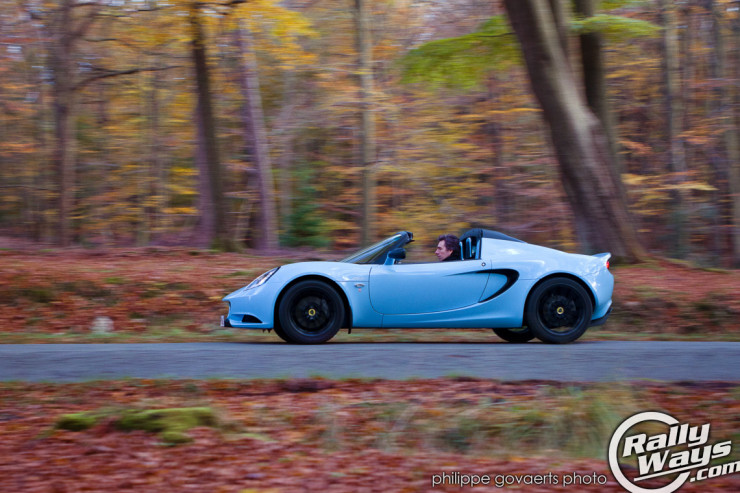 Going on a trip with Pascal is always fun, and this trip was no exception. You never know where you will end up, but the food will always be hot and the tires outside smoking. 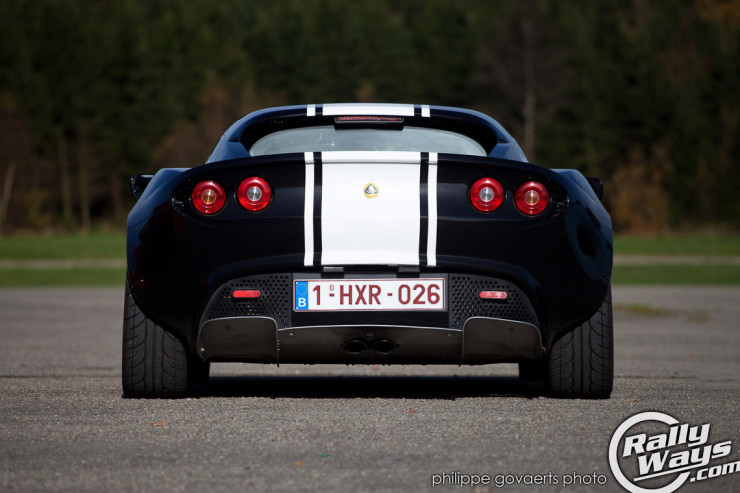 After a long time of searching, Steve finally found his Lotus dream car only a week prior to our trip to the Ardennes. The fact that it is a (UK-market) right-hand drive, gives the car and owner a more eccentric and individualistic look on the Belgian roads – A look that suits Steve well. His Elise is a 2004 111R model in gorgeous Starlight Black Metallic. It is more brutal and raw in contrast with Pascal’s more refined Elise Club Racer. 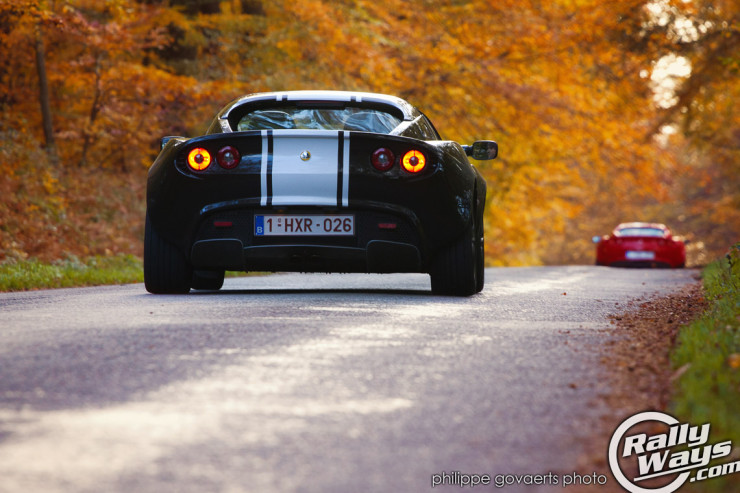 The 111R’s high revving 1.8 liter DOHC 16V naturally aspirated power plant produces a total of 189 BHP. Combine that with a curb weight of only 860 kilograms, and you get a pretty fast car. The modified suspension and Yokohama Advan rubber makes the car stick to the road. With the optional Stage-2 exhaust system installed it creates a very aggressive and loud exhaust note. In fact, it’s so loud that the only way the driver and passenger can communicate is by yelling at each other and using hand signs. Top this all off with some good old racing stripes and carbon fiber bits and pieces, and you get a mean-looking track machine. 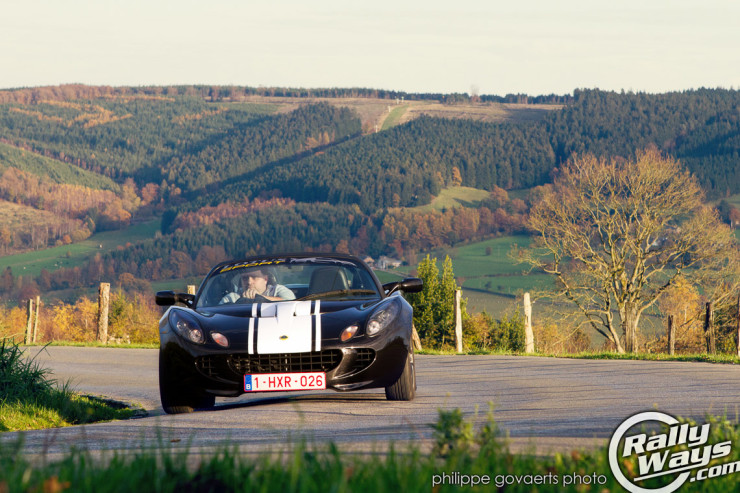 You can’t deny that this 111R is for born motorsport enthusiasts only. 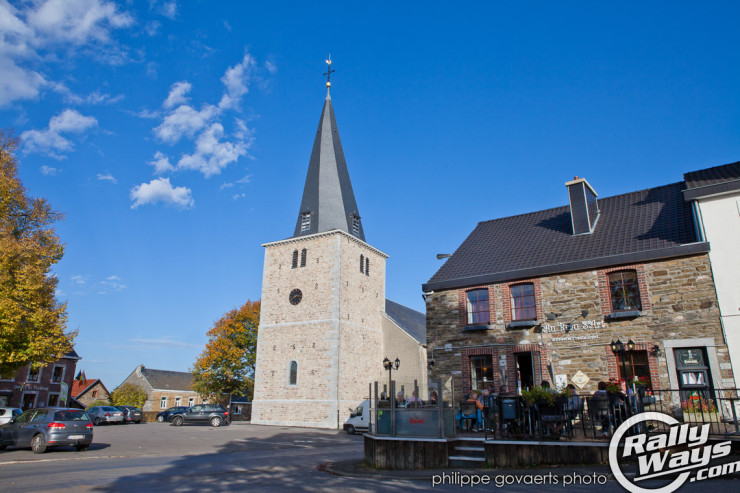 On our trip, we passed by several cozy little towns where we could stop to have a drink or rest for a minute, before getting on the road again. 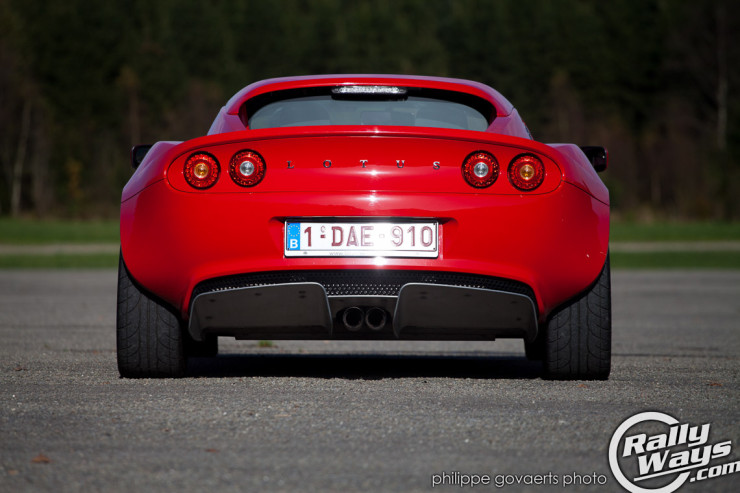 The Ardent Red Lotus is Frankie’s. After doing some research, he only recently bought his first sports car, a 2012 Elise. The car was originally bought by a Danish doctor who had a pharmaceutical company in Luxemburg. Back in 2012, this man ordered the newest version of the Lotus Exige, but due to manufacturer waiting times at Lotus Cars UK, they told him he had to wait for about two years before his Exige would be finished. That’s when he decided to buy an Elise which was currently in stock at the Belgian Lotus dealership in Oostende, so that he could enjoy driving this one while waiting on his other one being built. 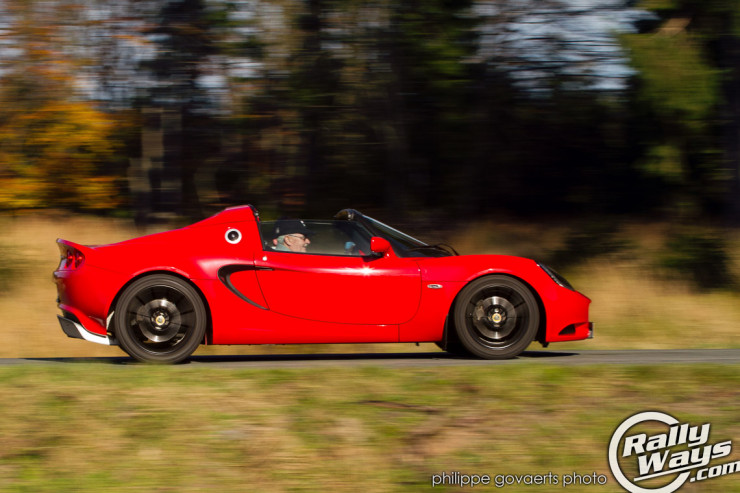 Earlier this year, almost two years later, Lotus Cars UK delivered the doctor’s brand new Exige and they took the 2-year old red Elise back in stock to put it up for sale with only 12,000 miles on the odometer. 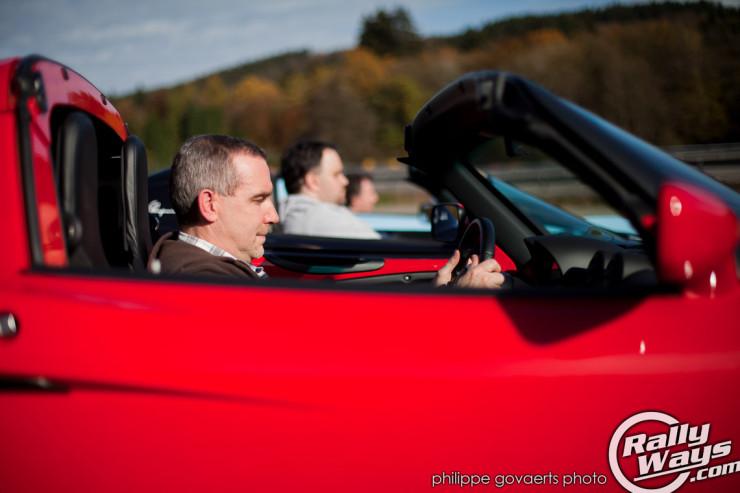 Frankie didn’t hesitate and bought the car immediately as it was exactly what he was looking for. He thinks the Ardent Red paint perfectly matches the car’s personality. In my opinion, he’s right! This Elise features the touring pack, which includes leather seats and door panels, and a leather-trimmed center console for a more gentleman’s look. The Lotus power package is installed as well, which features the Stage 1 exhaust system and TRD Air Filter, a must-have option on all S3 Elises. Frankie moved to the Ardennes a couple years ago and currently owns a B&B there. What he enjoys the most is driving his car during sunset through the valleys, while hearing the sound of the screaming engine and the typical smell of the pine forest.

We couldn’t get enough of this beautiful countryside and these amazing sports cars perfectly suited for it. You won’t be able to get enough either, so here are more photos…

Editor’s note: The story, as well as these amazing photos come from our talented correspondent in Belgium, Philippe Govaerts. I’d personally would like to thank him very much for bringing us such an awesome bit of European sports car love. Since we are based in California, having such an awesome facet of car enthusiasm from Belgium displayed on RallyWays is something we truly appreciate. -D