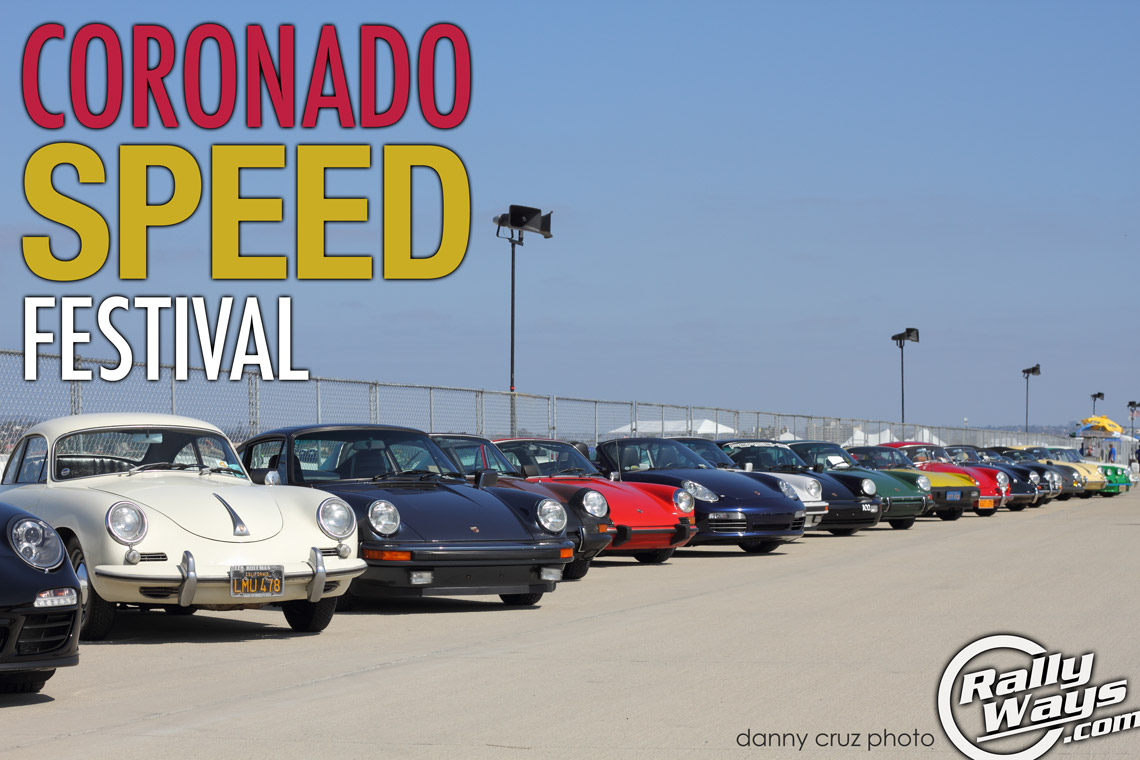 The Coronado Speed Festival takes place in San Diego on Coronado Island every year. It’s an event hosted by the military during Fleet Week in appreciation to all the men and women of the US Military. It’s an entire weekend of historic car racing, auto shows and much, much more…

This year’s theme marks the celebration of 50 years of the Porsche 911. We’re big 911 fans here at RallyWays. Right up our alley. Here we have full coverage of this epic event with astonishing Coronado Speed Festival 2013 Photos direct from Fleet Week San Diego. 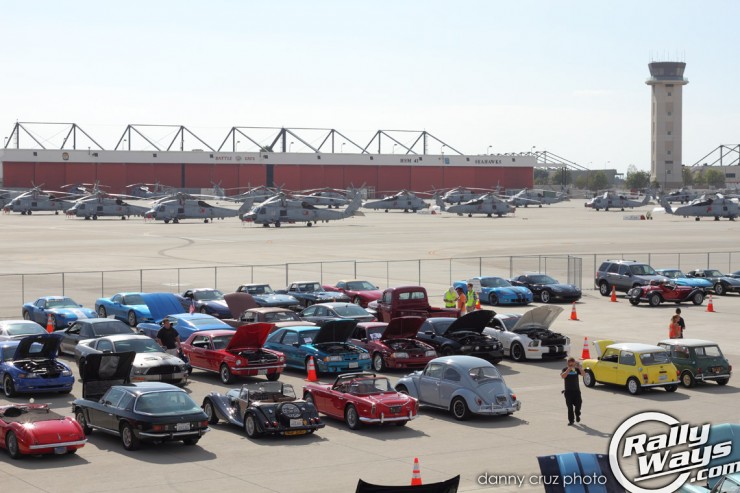 In typical journalism fashion, let’s start off with the best bit – historic car racing. If you think watching a typical race event is nerve wrenching, you should attend an event like this. The difference is pretty substantial.

Watching a bunch of really valuable vintage cars wheel to wheel racing on a sketchy track is one heck of a fun weekend. And I’m not talking about old Camaros and Mustangs only… I mean truly exotic and rare cars in close proximity and at huge speeds. One of the most shocking moments was seeing a genuine Mercedes 300SL Gullwing at full tap during the qualifiers on Saturday. 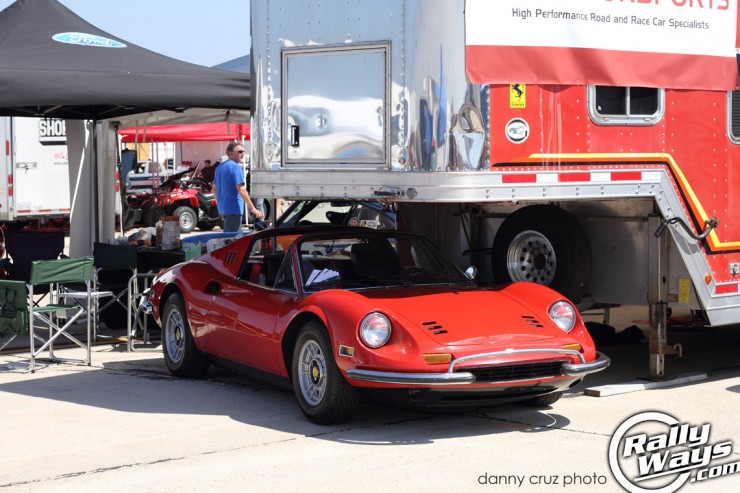 It wasn’t just the 300 SL that impressed us. Rare vintage racers included the following:

This is only a handful of the amazing historic racing cars present. We could spend hours listing them all.

This impressive array of vintage racing cars goes to show that racing wheel-to-wheel doesn’t necessarily equate to car carnage and destruction. These guys are experienced racing drivers. Watching races like this shows how experienced racecar drivers can be competitive, push hard, yet avoid contact.

After watching these vintage car races we can tell you first hand nothing is cooler than watching a full lineup of historic cars taking that last corner of the track at the upper limits of grip – It’s like a scene from a classic movie, only in real life.

Word has it some of these cars have been owned by the same people since new, and have lived a life of racing ever since. 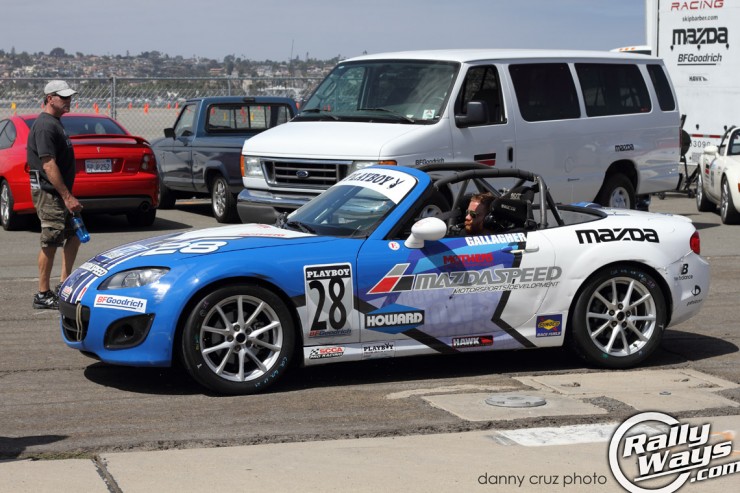 It’s not all clean cut driving however. Once you remove the vintage cars from the track and replace them with modern day roadsters, the action is quite different. Enter the Mazda MX-5 Cup cars.

The Coronado Speed Festival features the Mazda MX-5 Cup. This is a national tour of pro racers joined by semi-pro/amateur drivers from Skip Barber Racing School. They race the world’s favorite roadster, the Mazda MX-5 Miata. Their cars are modified for racing, yet are very much alike their road car counterparts.

These are modern cars and parts are readily available. It’s also a pro-series so action needs to be at level 10. For this reason, the competition is fierce and the driving ultra-competitive. There are multiple passes within a race and contact is not a rare occurrence. This was evident even during the qualifiers on Saturday with 2 cars bumping into each other rendering both broken. Then on Sunday even some wall contact.

The Mazda MX-5 Cup was an event we were really looking forward to at Speedfest 2013. If you are a regular RallyWays reader you know we are big MX-5 Miata fans here and we own both an original NA Miata and a NC Miata like the ones used for the MX-5 Cup.

These cars sound great on the track with full exhaust and at full chat. They have a 6-speed manual transmission with relatively low-gearing throughout. We noticed the drivers had to adjust quite a bit for the Coronado Speedfest’s makeshift airfield track (ala Top Gear) – particularly the second to last corner. Many of the MX-5 Cup cars were hitting the rev-limiter for at least a second on that particular corner yielding the unmistakable choppy sound of cut revs. 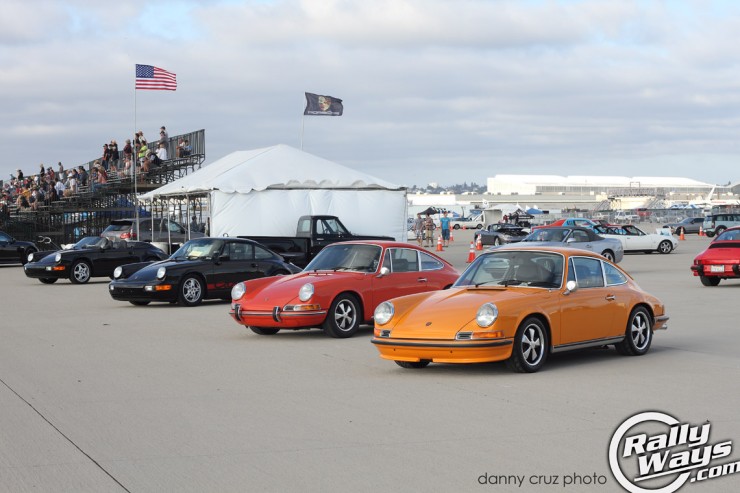 There’s no question that the featured marque at Speedfest 2013 was the Porsche 911. The celebration of the 50th Anniversary of the Porsche 911 brought more 911’s together in one place than we had ever seen before. There were 911’s from every generation and in all kinds of styles and conditions. Rare restored classic 911’s sat alongside modern ones. The were plenty of 930, 964, 993, 996, 997 and the new 991 on display all over the event. The Porsche Club of America San Diego Region made itself known with a big tent and plenty of surrounding Porsches of all kinds. 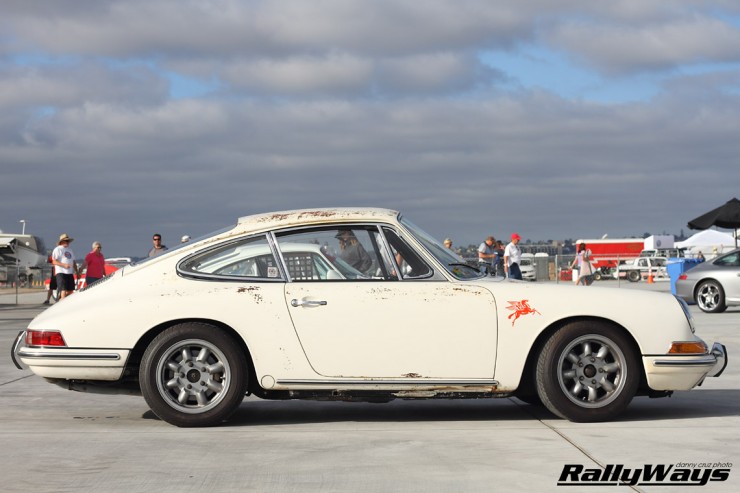 One of our friends got a chance to speak with Magnus Walker who was there with one of his famous vintage 911’s. We missed him though. Big event and we were simply not at the right place or at the right time. Glad we got the chance to meet him last spring.

Coronado Speed Festival hosts many car enthusiasts that come to watch the racing action but also bring their unique show cars to the event. There are 2 car show areas – Car Club Corral and the actual Car Show Contest area.

The Car Club Corral is the area where the local car clubs bring their cars for display. This is all along the southernmost stands. Car clubs present included:

The car clubs area makes for a great car show on its own.

Then there’s the actual car show area. Here you pay $15 and enter your car into one of more than 20 different classes.

We brought the RallyWays Miata (NA) into the club corral with SDCE. However, after having detailed the car inside out the day before using our signature step by step car detailing process we decided to enter her into the competition on Saturday. We figured our little Miata’s pristine engine bay would give us an edge over the stiff competition. 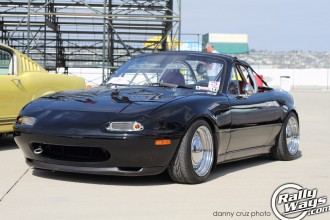 Saturday saw only 1st prizes per class and our car was edged out by the impressive custom Miata you see here – Well deserved in our opinion. The car is a 1994 Miata modded to look like the 1993 Limited Edition Miata in black with red interior. It was well built and featured many custom bits not included in the standard LE Edition. Some of the features included a ducktail trunk lid, chromed steel wheels with dish hubcaps like an old Beetle, full red interior with custom center console and Nakamae quilted vinyl. 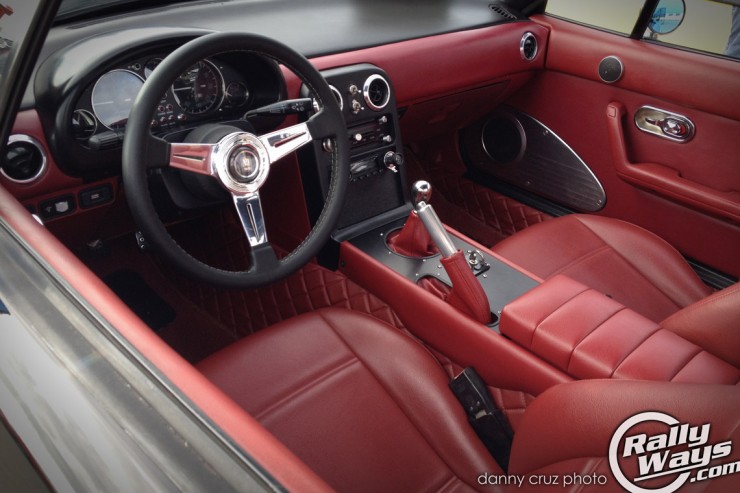 Still, we’re very proud of the RallyWays Miata’s showing. She seemed to stop foot traffic trying to get a closer look for hours. We know… ’cause we kept an eye on her from the stands. Cause she so sexy.

Show goers could walk the paddocks and see the racecars close up. Many vendors lined the vendor-village and test drives were available from Volkswagen and BMW.
We got to drive a 2013 Volkswagen GTI on a Mini Auto X course. That was good fun and the wait was not bad at all – 10 minutes tops.

The experience at the BMW Driving Experience was bittersweet however. Seems like everyone that can’t afford a BMW would much rather test drive one of those instead of a Volkswagen. It was super busy.

The wait took more than an hour on Saturday. To make matters worse, you couldn’t easily choose the car you wanted to drive. A group of test-drivers was put under a tent where they were given a little briefing. Then they let everyone off the hook were they would would run like gazelles to try and reach the car of their choice.

We were only interested in trying out the BMW 128i on the course – because we’ve been considering buying one. However, like James May, we weren’t about to run like some desperate 4-year-old. So of course we missed the shot at the 128i. We waited again at the tent for round two. Like James May we finally broke down and ran our asses to the 128i, around to the driver’s seat only to be clobbered by some blond bimbo who very classily jumped through the passenger’s side and across into the driver’s seat. Still can’t decide if that was a fearless gazelle-like attempt at seizing the opportunity or just plain lack of manners. So we left.

The sweet part of the ordeal came minutes later when our San Diego Car Enthusiasts friend Randell got us a shotgun ride with the Scott Pruett in a BMW M5. One tire-scorching lap later the whole experience was made awesome. It’s truly amazing to see what a professional racecar driver can do with a car in comparison with our mere-mortal driving skills.

Was the Coronado Speed Festival 2013 a perfect event? Well no. Like with everything else, there are always downsides. Interestingly enough, one of the biggest downsides happened before the event had even begun.

It’s sad when a great event uses a crappy online registration or payment system. We tried buying the tickets online at the online advertised price of $25 each prior to the event. We used a perfectly good Chase credit card and tried 3 times but to no avail. Speedfest’s online payment system would decline our card every single time. So, we decided we had no choice but to pay at the entrance.

Of course, once in line to pay, the price suddenly became $40 to get in and a total of $50 if we wanted to enter our car into the car show. Riiiiight. We parted with $40 and skipped the car show – briefly.

It took a bit of pissing and moaning at the information tent but we got our car into the car show for the total of $40 paid at the entrance – what it should’ve been in the first place if the online payment system had worked. We had a legitimate argument. The idea with an online payment system is not simply to save money, but to make the whole experience an easy one. Coronado Speed Fest is a magnificent event, we suggest the organizers use a system that actually works EVERY TIME. We spoke to a number of people that tried to buy tickets online in advance and many complained about the same thing. 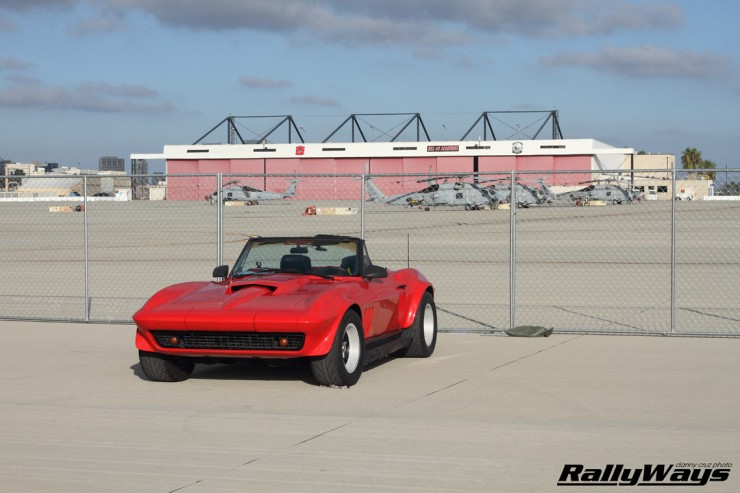 Overall, the Fleetweek Coronado Speed Festival 2013 was an amazing event and we are highly looking forward to Speedfest 2014. The unique blend of beautiful cars, the display of classic Porsche 911’s, historic racing and MX-5 Cup action made for a jam-packed weekend. The sun was out in full force, but the signs of early fall cool breeze and loads of sunscreen made it all bearable.

For Coronado Speed Festival 2014 we are looking to attend the event as media and get a trackside photography vantage point. As far as this year is concerned, the experience was epic and we reckon this is truly a bucket list car event.