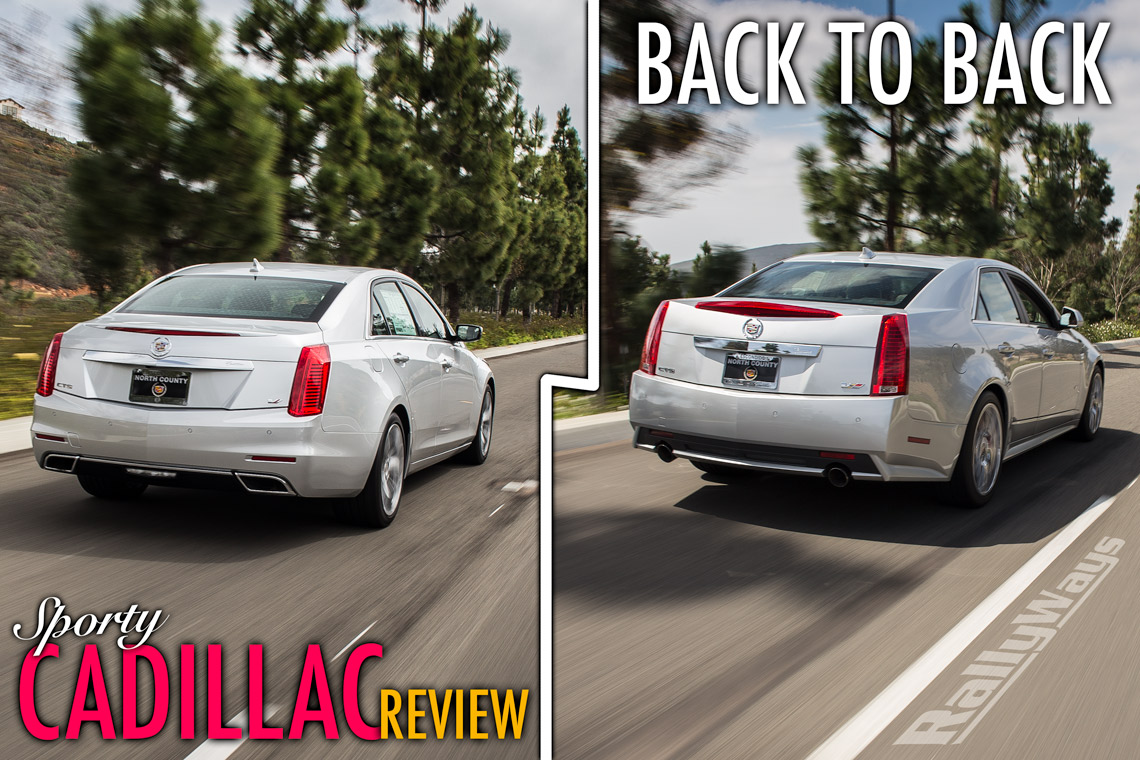 So what’s better than an awesome Caddy? Well, 2 of them of course! Here we have a 2014 Cadillac CTS-V and the new 2014 Cadillac CTS Vsport. We’re taking them on a mountain pass drive, back to back. Not too shabby for a sporty Cadillac review!

The pair of Caddies come from North County Buick Cadillac GMC in Escondido California. Our good friends Crowley Car Company arranged the drive for RallyWays to take each of the luxury sport sedans on a spirited drive on some top secret roads… on an early Sunday morning. That’s a perfect combination right there. 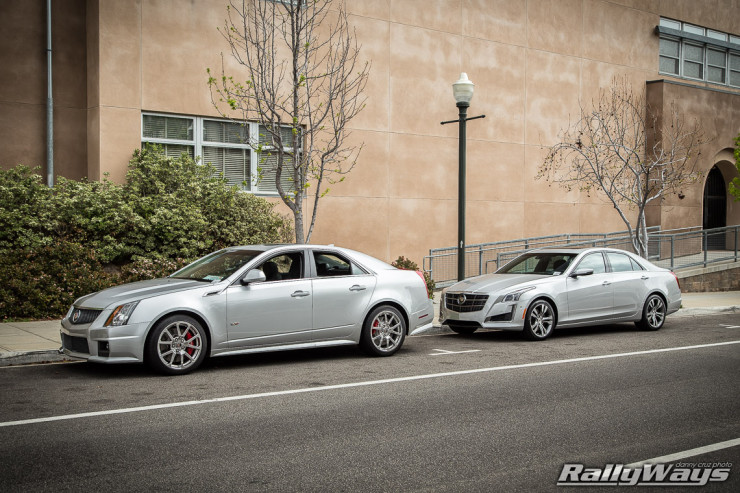 Upon looking at both vehicles it’s hard to see anything but hotness exuding out of each. They are both different but very much alike. The 2014 Cadillac CTS-V Sedan has the sporty Cadillac luxury sedan look that we’ve become accustomed to over the last couple of years. The appearance has definitely become a staple of hot Caddies – very distinguishable. The bold image is made solid with the power plant. The Cadillac CTS-V has the heart of a top-notch Corvette. A C6 Corvette Z06 that is. Yep, this car packs horses. Lots of them. 556 of them. And they are all force-fed with a giant spoon via the roots supercharger planted on top of the engine. 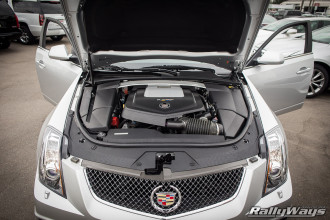 Add supercharger whine, immediate throttle response – even though it’s a slushbox – and a deep, deep V8 growl and the bottom line is this: The car’s shape might be a little dated by now, but who the heck cares? This car is intoxicating. It’s a hoot to drive and makes you look like you care enough about cars to choose wisely.

The 2014 Cadillac CTS Vsport Twin Turbo is different however. The body shape is completely new as is the interior design. The car is crazy full of tech. It can be seen everywhere from the fully digital gauge pod to the center navigation screen. The car uses a different kind of forced-induction than the CTS-V. The Vsport is propelled by a 420 HP twin-turbo V6. The engine sounds like a turbo V6 and lacks that big American muscle car sound. Having said that, it’s a really powerful car and while not a V8, it’s a great sounding engine nonetheless. 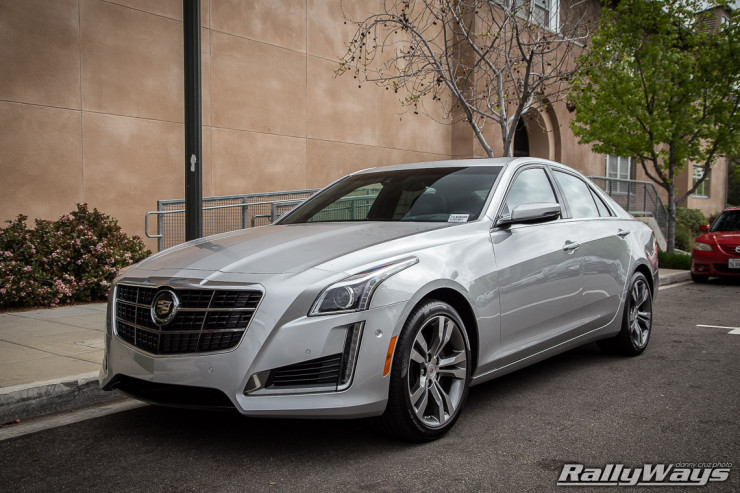 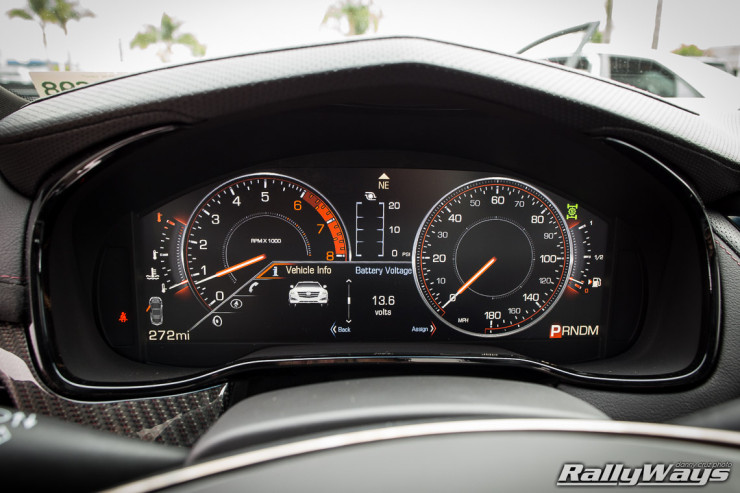 The 2014 Cadillac CTS Vsport feels overall more like sporty Cadillac than the CTS-V. That’s something that’s interesting to say because if you look at the car’s appearance on the outside, it looks more like a fine executive sedan than sports car. The CTS-V is a bit more vulgar – like a bodybuilder on steroids. But one that can actually lift heavy stuff and has a deep voice. Not like one of those that has muscles full of water and air and a voice like Alvin from the Chipmunks. In some ways, putting both of these cars head to head is a bit like studying the pros and cons of a supercharger vs a turbo – Only the CTS-V wins that round hands down because regardless of the method of forced-induction, it still has the biggest displacement. 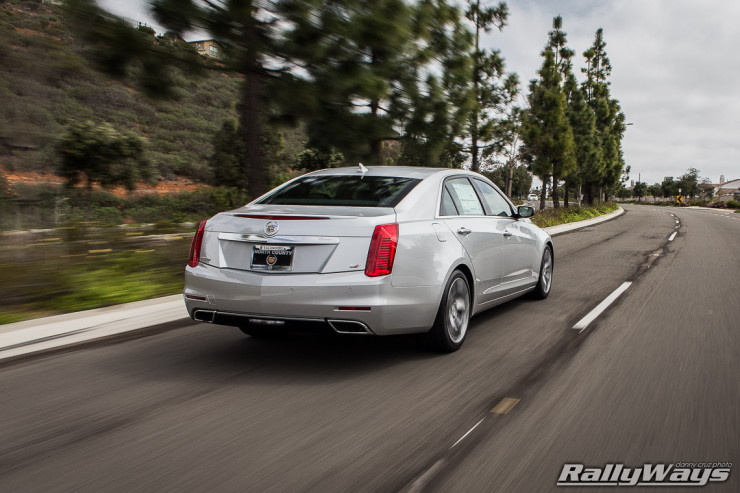 The Vsport on the other hand is like an olympic athlete. Think Usain Bolt. Tall, but agile and fit. Not ginormously muscular. The sporty nature of the Vsport is also seen in the cabin. The entire interior is better laid out and more modern. The adjustability and customizability of the thing is just unreal. There are more buttons in there than in a NASA space ship. And it isn’t like the CTS-V doesn’t have any buttons. That one’s crazy full of things to push too. Just a little bit more under control. 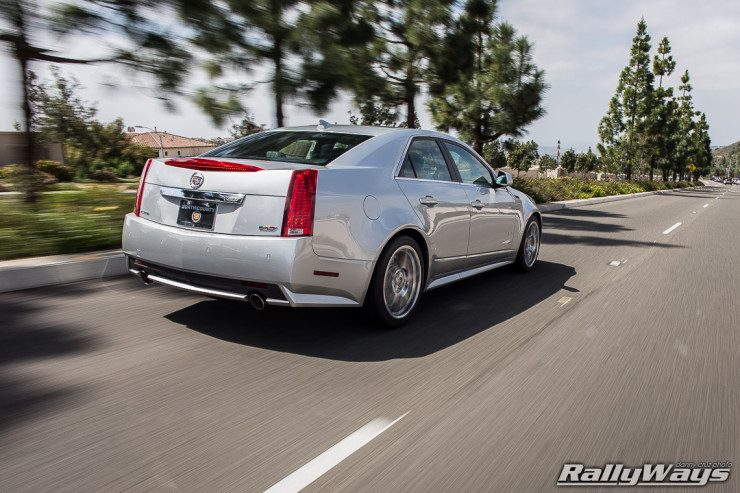 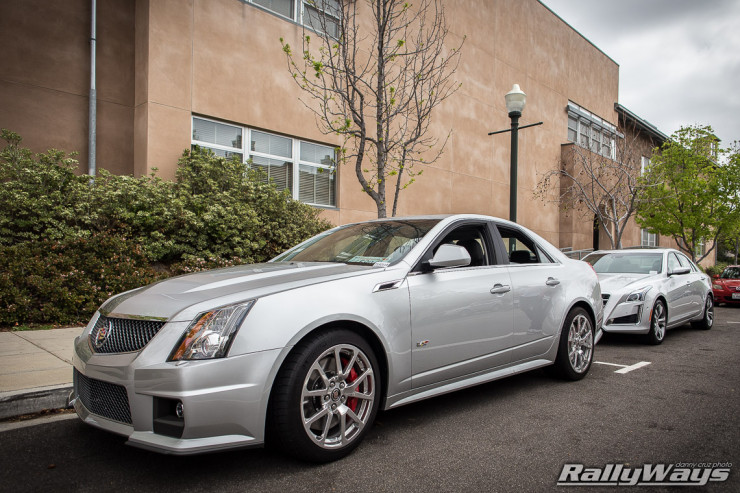 Since we were focusing on the drive and the drive only. Pushing buttons all day long was not part of the plan. We did push a few… mainly to select track mode.

There are many other things we noticed. Oftentimes Euro journos criticize American cars, even the luxurious ones, for their interior. I really don’t know what they’re going on about – or maybe they haven’t been in one of these. This is no Jeep. The interior in both cars really is nice. Great, that is.

There were many clever things too. Like the selection for the location of Alcantara and leather inserts. Apart from the steering wheel, which was Alcantara in the CTS-V and leather in the Vsport, the layout of materials on the door panels was specially clever. There is Alcantara in many places, but there is leather in some of the most touched areas. We all know that Alcantara wears better than standard suede, but it still doesn’t wear as nicely as leather does. In other words, if you touch it a lot it gets ugly quick. Well, leather was used in those highly touched areas and I suspect it’s for this very reason. Very good thinking by the engineers there.

Both cars are amazing inside with their Recaro seats and luxurious materials, but the Vsport gets the nod as the coolest car to be in. Not to mention, red interiors are awesome. While the Vsport doesn’t have a full red interior, it has a nice combination of red, blacks and greys plus really clever red carbon fiber weave on the door panels. The CTS-V is a little more mature with burlwood for the door inserts instead of the boy racer carbon fiber of the Vsport. Where did I see burl wood like this? Oh right, in a black Porsche Panamera Turbo S. Ooh nice!

The interior of the Vsport could definitely be considered superior to that of the CTS-V. Both cars can be set to manual mode so paddle shifters can be used for control the transmission. However, on the CTS-V, the paddles are more like small plastic buttons behind the steering wheel. The Vsport however gets properly large paddles that makes the shifting experience a lot more fulfilling.

The power in both cars is plenty. The CTS-V has a direct response and power on tap, typical of supercharged cars. The go pedal seems to go on forever. The first time you drive it you would think the throttle is mashed fully into the carpet when really you still have a long ways to go. Pushing it all the way in can be downright scary. The car has great brakes that handles the car’s extra bulk just fine. Same goes for the suspension. As luxury car, the CTS-V is not a lightweight, but never did it feel like a handful. But at the same time, I was not on a track so I was nowhere near the car’s limit.

The Vsport has tons of power too, specially on the top end. Due to it being a twin-turbo, and a bigger engine than most turbos out there, turbo lag is not noticeable. It feels like a powerful naturally aspirated car to a degree, and the blend into boost is very linear. Definitely not a strung out Turbo I-4 like many of us are accustomed to. In terms of suspension and overall sporty driving feel, the Vsport is better than the CTS-V. It’s the one you want to take on a mountain pass. 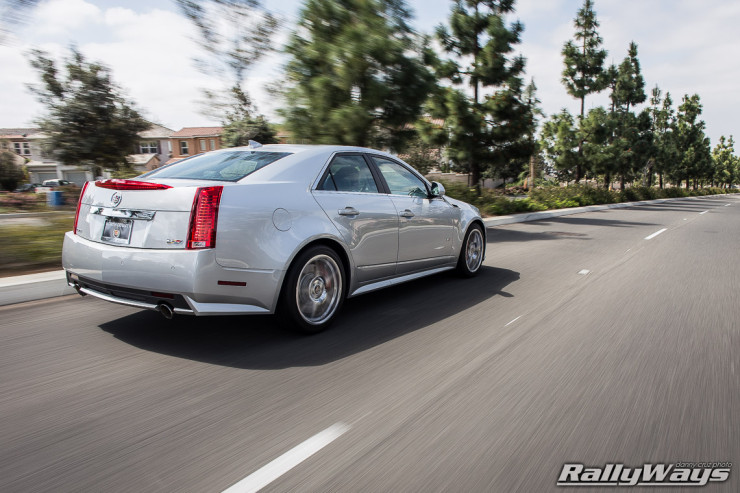 Both cars are amazing to drive. The CTS-V is clearly faster and more powerful, but the only reason I can tell you that is because I drove both back to back. If I had driven them 2 weeks apart, my clear favorite would’ve been the Vsport Twin Turbo. The Vsport is simply a more sorted car inside out. I feel it’s better looking and more atone to its sports car nature. It’s not an executive sedan trying to be a sports car, but rather a sports car in executive sedan guise.

However, and this is a big one, the engine in the CTS-V… Oh my gosh! There’s a reason people stick LS engines in everything from Miatas to 240SXs – they are just wonderful machines. Plus, this is not just a bottom tier LS engine either. It’s like having a Corvette Z06, but one that’s comfortable, quiet and easy to drive every day. It’s a sports car when in track mode and a cruising luxury sedan in comfort mode. It’s basically all things to all people. If it were the only car in the word, nobody would be complaining. 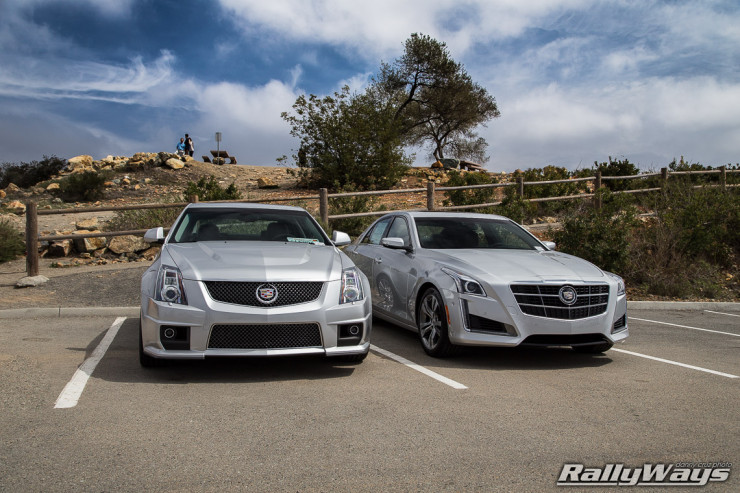 So which ones for me? Well, I like the Vsport better. But oh my would I love it with the supercharged V8 more!