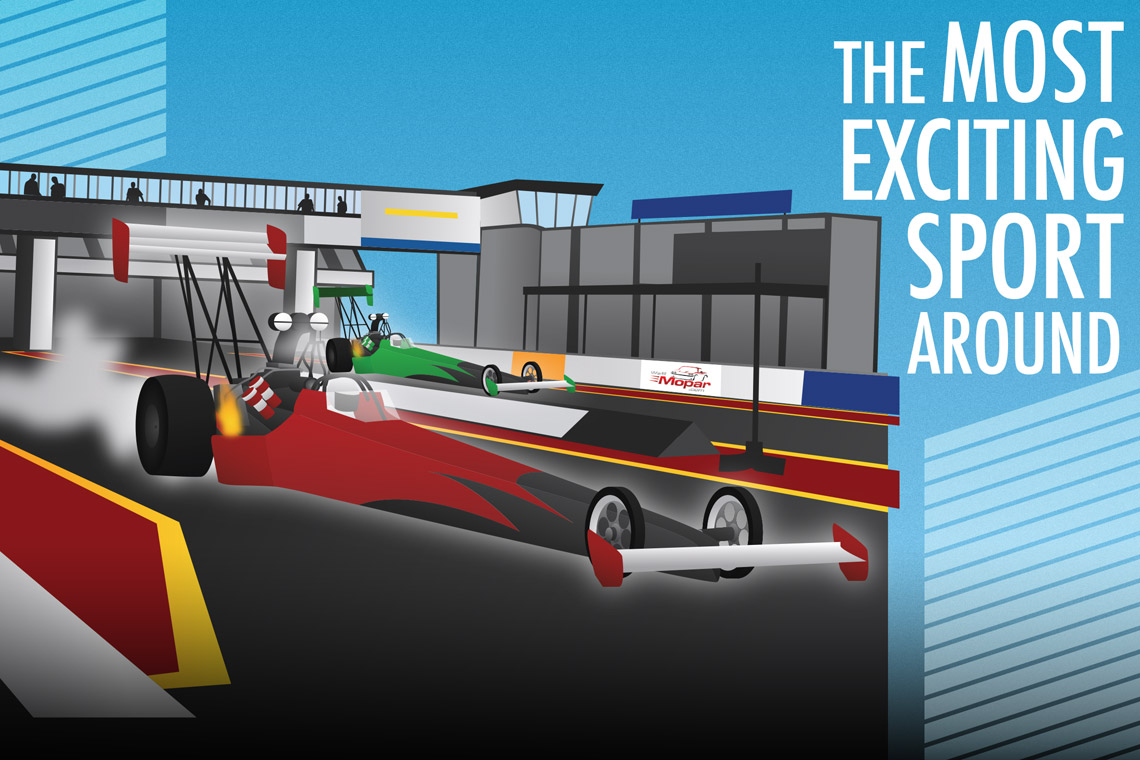 Top fuel drag racing is a class of automotive racing where cars run on 90% nitromethane and 10% methanol. The cars used in this class are nothing shy of extreme – they are built specifically for the track, and they can out accelerate (allegedly) any vehicle in the world (at least for a quarter mile).

Top fuel drag cars are long and narrow, have large rear tires and extremely narrow front tires, and very little sits between the driver and the explosive powertrain.

This is the fastest class in the NHRA drag racing series, and that’s evident by the capability of the cars racing. A top fuel dragster can reach 300 miles per hour in under 4 seconds. For comparison’s sake, the new Corvette barely gets to 60mph in that same span of time. Indeed, the performance seen at top fuel drag events has been dubbed as being “physics defying.”

When a top fuel dragster is rocketing down the drag strip, everyone in the area will physically feel the Earth shattering force…

One run down the drag strip in a top fuel dragster is supposed to cost about $6,000 – and that doesn’t include any costs associated with the crew, driver, tools and equipment, etc. That’s just the cost of fuel and replacing all the engine components (like bearings and valve springs) that are destroyed during each run.

When a top fuel dragster is rocketing down the drag strip, everyone in the area will physically feel the Earth shattering force of these beasts. The concussion of the engine can be felt in your chest, and you must cover your ears (or wear ear protection) or your head will be wringing for hours.

Sadly, this extremely dangerous sport has claimed many lives – after the death of Scott Kalitta in 2008 when his car exploded from hitting the end of the track, runs where shortened from a quarter mile to 1000 feet to create more stopping room to prevent similar tragedies.

A few years later, the lessened distance has undoubtedly prevented some end-of-the-track crashes, but also allowed more low-budget teams to enter the class. Cars are still capable of rocketing to speeds over 300 miles per hour in this shortened distance, and fans still get to experience the same heart pounding excitement knowing their favorite drivers are doing it with a higher level of safety.

This top fuel infographic by We R Mopar includes interesting information about the sport:

Methanol: Mixed with nitro, this fuel is used in top fuel dragsters.

Nitromethane: Also called “nitro”, this fuel is specifically made for drag racing. Top fuel dragsters and funny cars use this fuel.

Burnout: As a good auto enthusiast, you’ve probably done more than a few of these in your time, but in drag racing burnouts have a purpose beyond thrills. Burning out the rear tires in water (which is mixed with a bit of detergent) helps to clean the tires as well as heat them up to make them “sticky.” This is vital to keeping the car moving as straight as possible when it leaves the line.

Christmas Tree: The christmas tree is a calibrated light system that counts down the start for each driver. For top fuel racing, the time between the final two counts is almost undetectable. Blink and you’ll miss it!

Reaction Time: The reaction time is how long it takes a driver to get the vehicle moving forward when the lights signal to go. With cars so closely matched, a driver’s reaction time factors greatly into the outcome of the race. A driver’s goal is to have a perfect reaction time, which would be 0.000.

Red Light: Red lighting is an embarrassing technical error that will automatically cost the driver the whole race — this happens when the driver leaves the line before the last green light illuminates.

Jr. Dragsters: A jr. dragster is a half scale version of a top fuel dragster with a 5-horsepower engine that’s capable of reaching speeds of 80 miles per hour, and running through a 1/8 mile in 7.90 seconds.