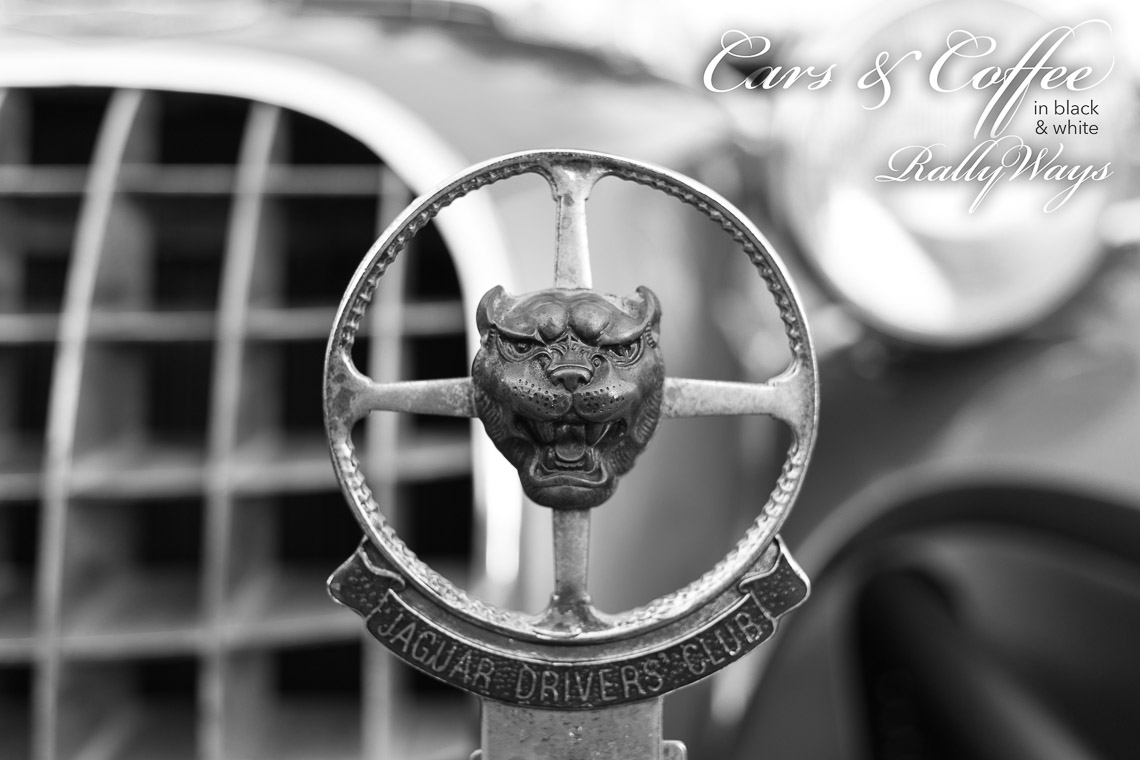 The combination of sensory overload at Cars and Coffee Irvine makes waking up at four in the morning a non-issue. The more you attend, the more you see things you didn’t know were there. The details make it special and these details are impossible to absorb all in one morning.

Let RallyWays show you a new perspective with our Cars and Coffee Irvine Pictures in Black and White photo essay. 75 fine images from one of the world’s best car gatherings. Go on, take your time. Read the story after the slideshow.

The thing about C&C Irvine is, it moves along very fast. Too fast to keep up. This might not seem the case for those that attend every week. However, for the first timers, and even those that attend once every few months, it really is a blur.

Cars rush in promptly around six in the morning. Stunning car after stunning car rolls in and the lot fills up quickly. Soon, the entire lot is overflowing with priceless machines. Next thing you know, it’s eight-thirty and people start rolling out. By nine-thirty, the lot is almost empty. Everything seems to happen all too quickly. Not enough time to take it all in.

RallyWays attends quite often. We’re not there every week, but we’ve covered the show enough times during the last two years that we decided we wanted to try a new perspective on our photography. That’s when the idea of creating this photo essay of Cars and Coffee Irvine pictures in black and white. We dedicated the entire morning to shooting these in a series where the photos themselves tell the story.

Today, the air is brisk. This entire photo essay was captured in only one morning during a cold winter by Southern California standards. At six in the morning, when most cars begin to arrive, the fog is dense – so dense that it is almost dangerous. The clean and polished cars arrive wet from the fog. Since there is no brick and mortar coffee joint nearby like there is at Cbad Cars, picnic tables are erected with Starbucks’s best drip, donuts and pastries. The regulars flock to the coffee while the newbies and photographers are left to gawk at the vast array of priceless automobiles.

Hundreds of cameras tour the show – some professional and countless hobbyists. It’s hard to get a clean shot with all the automotive appreciators constantly inspecting every nook and cranny. This makes for some creative photography. Photo closeups of grilles and headlights become useful as do candid shots of those dedicated enough to be at a car show at dawn.

Who goes to a car show at dawn on a Saturday morning? Seriously. Chances are, if you are reading this, you are one of these dedicated car enthusiasts that prefer the smell of petrol in the cold morning air over a cozy bed with a naked spouse.

If you understand the joy that comes from looking at rows and rows of classic Porsches, the prospect of using up one of the only two mornings you have to sleep in would not sound so far-fetched. Don’t like 911’s? C&C Irvine hosts countess marques like Ferrari, Lamborghini, McLaren, Jaguar, Aston Martin, Bugatti, Triumph, Rolls-Royce and so on. Can’t name them all, but you bet they are there.

Not everyone likes C&C Irvine unfortunately. Mostly those that get turned around. While no Studio 54, “bouncers” will ask a selection of cars to turn around and park at the nearby multi-story. This usually precedes screeching tires and smoke coming from a rather upset visitor that probably spent 5 hours polishing his ride the previous evening instead of living out the typical Friday night.

No real criticism of the organizers. They have to do what they have to do, otherwise many really special cars would not make it in. Generally, cars less than 15 years old are more susceptible to being sent away. The more doors the worse are the chances. Too bad the Mitsubishi Evos fall in this category. A number of very nicely-built Evo IX and X’s often gets sent away. The one you see in the photo essay happened to think ahead and likely arrived at five in the morning. That didn’t save him from getting a printout with the rules tucked under the windshield wiper.

We do our best to attend Cars and Coffee Irvine once a month or anytime we feel it’s time to be overloaded with automobile excellence. For those of you not lucky enough to live so close to such a word class motoring event, you have us to bring you the high points. Enjoy the photo essay. We purposely shot these photos with this story in mind. We also purposely built this photo series in a style quite different than what we typically create.

Seventy five pictures is a lot of pictures. We wanted to convey an entire experience and we felt anything less wouldn’t be enough. Honestly however, this piece was originally going to be titled, “100 Photos from Cars and Coffee Irvine in Black and White” but we started trimming it down. The end result is the images you see in the slideshow which we are very proud of. In which case, enjoy our 75 masterful images! Until next time.