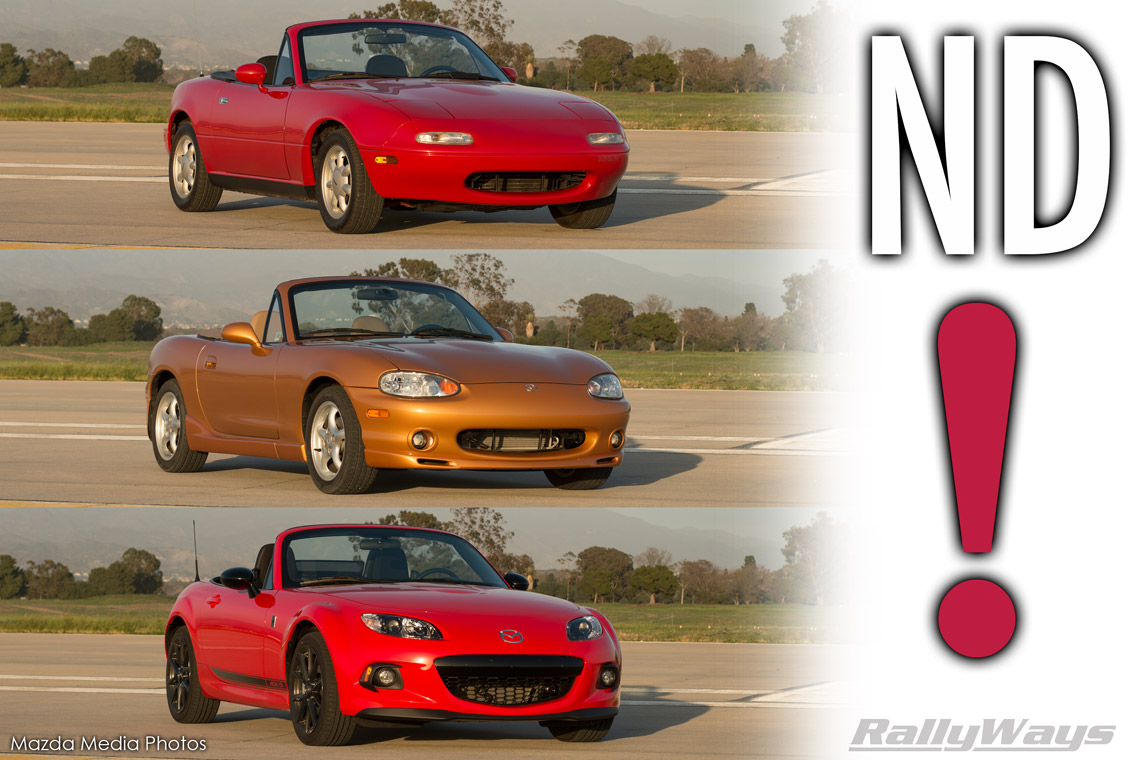 It’s Official! You heard that right! Mazda has just announced they are revealing the new 2016 Mazda MX-5 Miata ND! The car will be revealed on September 3rd 2014 and will also be on display at Miatas at Mazda Raceway Laguna Seca from September 5-7, 2014.

Over the last year, there has been a ton of forum speculation on when Mazda would be revealing the new Miata. We even predicted a 2014 unveiling. It turns out that those that were speculating it would happen at the Miatas at Laguna Seca event were absolutely correct. The car will be a 2016 model, which likely means it will be on sale sometime mid-2015. So roughly a year from now.

Mazda even published a video with what likely are the real engine sounds coming from a ND Miata test mule.

The biggest deal of the new 2016 Miata ND is the fact that Mazda themselves claim, or at least hint at, a weight reduction of 220 lbs! That’s taking the car back to NA weight levels. It’s also the first time a front-engine, rear-wheel-drive car will be getting Skyactiv technology. To make matters even more exciting, this is the “ND” model. Mazda enthusiasts are of course familiar with the various generations of the Mazda RX-7. Many enthusiasts claim the “FD”, which is at the moment the last generation of the RX-7, to be the best of the lot. Things are really looking up for this fourth-generation Miata then.

A couple of months ago we hinted at new ND Miata and the things we thought it would have or should have. It’s on the Miata section of RallyWays. Unfortunately, while Mazda will likely drop hints here and there before the official reveal on September 3rd, 2014, we’ll have to wait 2 more months to find out.

Since you probably can’t contain your enthusiasm, here’s a link to the official fourth generation Mazda MX-5 Miata press release by the folks at Mazda USA in Irvine, California.

What’s astonishing is that Mazda was able to keep the development under wraps until 2 months before the reveal! Not counting the reveal of the ND chassis that happened a few months ago at the New York Auto Show, there have been very few test mule sightings and very little info has leaked on the new car.