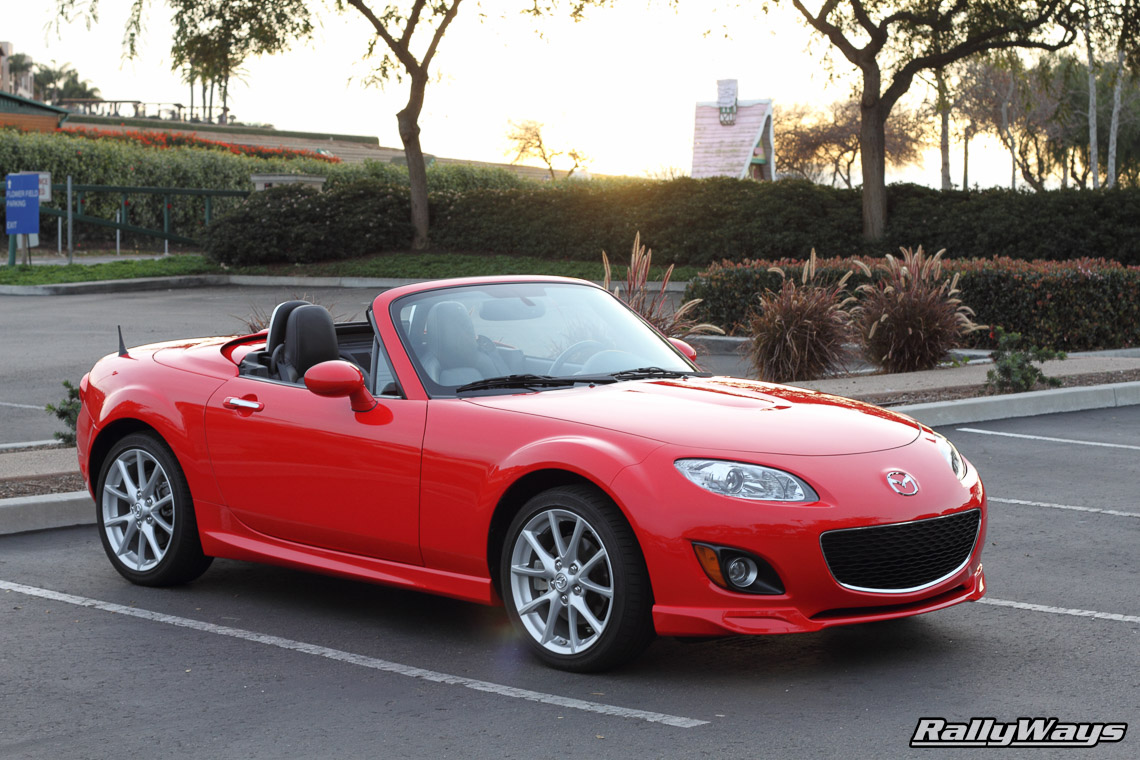 As a kid, and later as a teenager I was very much into cars. I could pinpoint the make and model of every single car I saw on the road. These days, I go through phases. There are times where I have car fever and times that I don’t. But overall, you could say I’m car fan. Right now, I’m going through a car fever phase. I’ve always been a fan of sports cars in general more than any other type of car. I’ve always had a special love for Corvettes and certain Porsches. On the other end of the spectrum, I have an affinity for pickup trucks as well. I read a lot of car magazines and I’m quite a fanboy of the UK TV series Top Gear. So, after reading the raving comments by Consumer Reports and hearing what all the magazines had to say in their feature videos about the Mazda MX5 Miata PRHT, I had to get a hold of one and test drive it. The Consumer Reports article I read was based on the 2011 model. So I went and hunted one down.

“If you still need to prove to the world that you have a big penis, then by all means buy a big, big car.”

Being a big fan of Corvettes and 911 Porsches, I lean towards a slightly bigger, more powerful type of sports car. Having recently bought a Ford Mustang, that large car inclination didn’t stray very far from the norm. While I’ve always liked the little Miatas to a certain extent, I was never a big fan of the first and second generation body styles. I thought they looked too small, the driver looks like he’s sitting on top of the car instead of inside it, and the standard single exhaust in the rear didn’t strike me as very much fun at all. However, this new body style that came out a few years ago is a whole other story! Now this is more like it!

Before we proceed, please keep in mind this is not a typical car review. Don’t expect me to start feeding you all kinds of tech numbers such as horsepower, torque, RPMs and all that other stuff. You can always search for that info yourself. This is my original “judge’s impression” of the car. And being a Top Gear fanboy, I might just comment on how incredibly stupid, little and girlie the car is and then completely shock you when I say how much I love it and want to buy one. Or maybe it’ll be the other way around. I don’t know yet.

A Thursday afternoon, after leaving the office, I finally tracked down a 2011 red Grand Touring edition with the power retractable hard top roof (PRHT). The first thing that struck me as awesome was the roof! What came to mind when hearing the words “Miata hardtop” was that I would have to remove the entire roof and hang it on the wall in my garage ala 911 996 Carrera Cabriolet if I ever wanted to go drive away as a convertible. On the other hand, I’ve never been a fan of rag tops. Where I’m from, if you have a cloth top, it will most likely get cut open and your car stolen. Even though I don’t live in such a place anymore, the fear stays with me. So, when I saw that the MX5 hardtop actually folds down and hides behind the seats I immediately fell in love with the thing. From then on, it was just a matter of exploring more of the goods.

Now let’s try and get past the fact that half the population labels the MX-5 Miata as a girl’s car, or a gay car. Let’s try and put that aside first by mentioning a few things: The body style on this car is astonishing! The car is still small, but unlike the older models, it looks bigger, faster and more like a little cheetah ready to jump and attack you. The extended and pronounced fenders make the car look wider and the bold shape makes it look stronger. The entire car looks like Mazda finally improved the newer body shape to near perfection. The larger 17″ wheels are also a welcome addition. If you still need to prove to the world that you have a big penis, then by all means buy a big, big car. Now that we have gotten that out of the way, we can proceed.

Once I got over playing with the fold down hard-top, I concentrated on the interiors. I find car interiors extremely important. The interiors are almost as important as the exterior of the car and the engine performance. I mean, that’s where I’m going to spend most of my time! As a comparison, I find the interiors of the Ford Mustang brilliant for the price. In contrast, one of my favorite cars of all time, the Corvette, has interiors that are generally, well, crap. Unfortunately, GM has never been that great at designing interiors and I don’t really think they are going to change any time soon. The fact that they put the same steering wheel in the Corvette as they did on the Chevy Cobalt just tells me they don’t know what the heck they are doing. But the interiors in the MX-5 Miata are very well thought through. Everything seems to be done just right. The steering wheel is of great quality and the shape is actually something worth having your face in front of all the time. The car feels spacious even for bigger guys. The controls are very well laid out and the manual shift knob sitting inside that perfectly round tray with chrome bezel is amazing to say the least. It’s absolutely perfect inside.

Not a Jag, not exotic, but we’re not comparing apples and oranges here. When sitting inside you look and feel nice and low too! No more of that sitting on top of the car look that bystanders get to see. It’s absolutely comfortable. I sat in a Pontiac Solstice and couldn’t get over the fact that my right elbow kept banging against the back of the center console. Not the case in the MX-5. The bottom line is the car has GROWN UP. The quality of these interiors is miles ahead of the old Miatas and miles ahead of many other cars in that category and price range. Some people say, “What? Almost $30 grand for a Miata!” But, just look at this new car and compare it to the old Miatas. There’s a good reason for that. The inner door panels alone give it away.

Another thing I found amazing is the smile theme the car seems to have. Mazda seems to have finally got this right. It’s like if designers of the front grille started with a little round mouth a few years ago to have the car saying “ooooh” and slowly started modifying the shape into a full blown giant smile. Same goes for the Mazda 3. This looks like it has a real purpose, with the complete intention of going all out. That’s a lot to say when compared to some of the previous year’s grilles that make the car look like it’s shy, or constipated. This newer one’s bold and not afraid to be the center of attention. And it’s happy – happy to be awesome. The eyes make it look like a little alien; but a happy alien at that.

I can’t comment on drift-ability, sheer top speed and super tight cornering because I didn’t get a chance to drive the car in such a way. So, let’s go for the real-world approach. If I ever get a chance to burn rubber properly on one, then I might come back and append an update to this thing.

First of all, the car is fun. I know, at this point, that’s a cliché when it comes to MX-5 reviews. But I don’t care. I had fun in it. The car does not accelerate like a Mustang or a [place your V8 car of choice here]. But it still feels quick. Since it’s so lightweight it responds fast to the gas pedal. The fact that the one I drove is a 6-speed manual makes that statement even more true. It just responds quickly to whatever you do. It feels nimble (another cliché), balanced and ready to do whatever you ask it to do. The test drive took me up a hill and then racing back down again. Brakes were great, the transmission and shifting superb and the overall feel of the car was right in line with the awesome interiors and the overall amazing looks. There’s no two ways about it. I loved the car.

But hey, it’s a car for driving pleasure. You’re not in it to cause an impression on others like you would in a plus $50K car. It’s the most expensive Miata to date at around $30,000 (or so I think) but it’s not as impressive in nature as a similarly priced Mustang. Obviously, just opinions as there are plenty of folks that hate Mustangs. If you are a guy, the people around you, including your girlfriend or wife, are going to give you crap about it being a girl’s car. Keep in mind you’re not going to land a better job because of it either. That’s a Jaaagg’s job! The car also seems to depreciate more than other vehicles in that price range. But the car is simply awesome! What does this mean? Well, it means that if you want a car to be enjoyed from the inside out, this is the car for you. But, if you need everybody else’s approval before you can enjoy it, then either look elsewhere or buy one for your wife and drive it when you feel like having fun.

As for me, I’d be happy to buy one. I do like the car THAT much. I’d drive it on the road exclusively for a year or two. Then, given the vast amount of performance parts available for them, I’d work on it a little bit and then take it to a nice, tight winding track every so often. I will still have my wife and a number of my friends giving me a hard time about buying it over a Corvette or Porsche, but who the heck cares right? 🙂 I can always buy a Corvette later. They’re all over the place. Nice thing about it, it’s got 2 seats! That’s not a whole lot of space to bring a bunch of complaining critics along for the ride!

Ah, What the heck! Here are some numbers for you:

The is one of the first RallyWays car reviews from a years back. Things have changed a lot in our appreciation of the NC Mazda MX-5. We actually love it more than ever around here. We became experts on the topic as well. We wrote one of of the best modding articles for the NC Miata on the web. You can read that article here: Mazda MX5 Miata NC 2006-2015 Essential Mods