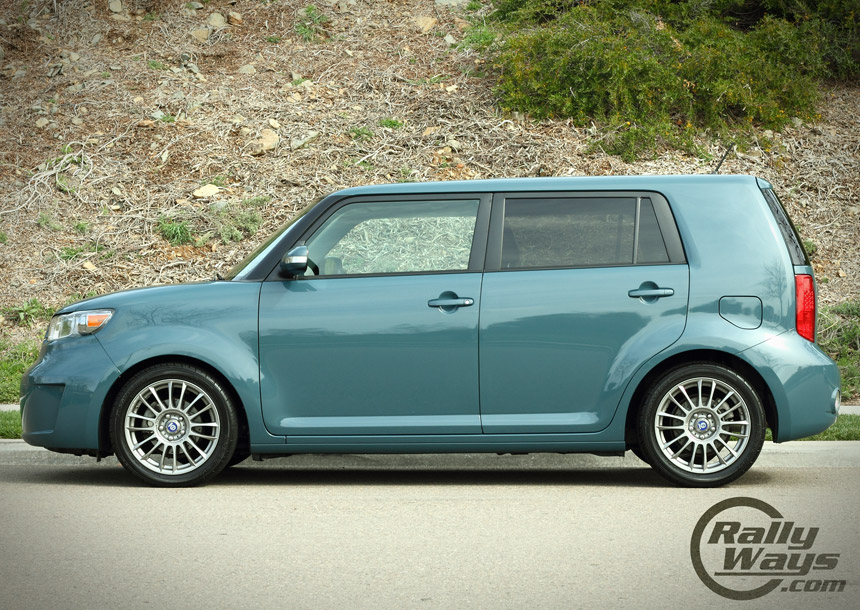 Now, the nice thing about this review is that unlike all those reviews by car journalists who drive a car for a week (if that) before reviewing them… I’ve been driving this XB for 3 and half years. So, from me you will hear a real life experience review of the Scion XB. What it is truly like to live with.

A lot of people call the Scion XB a box or a toaster. Yes, the generation 2 XB is square-ish, but not anywhere near as boxy as the 1st generation XB. Some guys like that, but fans of the generation 1 don’t. This one is bigger, a little more refined and rounder around the edges. It also has more power, better brakes and nicer interiors. In fact, some describe the interiors as huge. I certainly think so. The rear leg room is amazing. Fold down the rear seats and you can fit an entire circus in the back.

The car is good looking, it’s cool and it’s hip. It appeals to the younger crew, but at the same time I can’t help but notice all the bald old dudes driving these.  Scion did hit the nail on the head trying to make the car that put the brand on the map appeal to a wider age group. Unfortunately, at the same time pissing off many the hardcore fans of the unique generation 1 XB. Even though it has grown up, I sometimes wish I were driving something a bit more mature and elegant. But only sometimes.

Good thing is, you can get the famous Toyota Camry reliability without having to drive that awful boring thing.

The engine is a Toyota inline 4 cylinder that produces 158Hp at 6,000 rpm and 162 pound-feet at a more modest 4,000 rpm. This engine is the 2.4-liter DOHC 16-valve engine that you can also find in the Scion TC. And… also present in the 4-cylinder Camry from the same year. Good thing is, you can get the famous Toyota Camry reliability without having to drive that awful boring thing. I bought this XB new with about 8 miles on the clock and never once have I had a problem. I took it in once for an electrical distributor some-such-something recall that Toyota did. The possibly-faulty part was replaced, and I drove home. My XB never missed a beat since.

The Hypnotic Teal Mica color is one of my favorites, and although I tend to like the white one a bit more, some claim it looks like an ambulance. Ha! 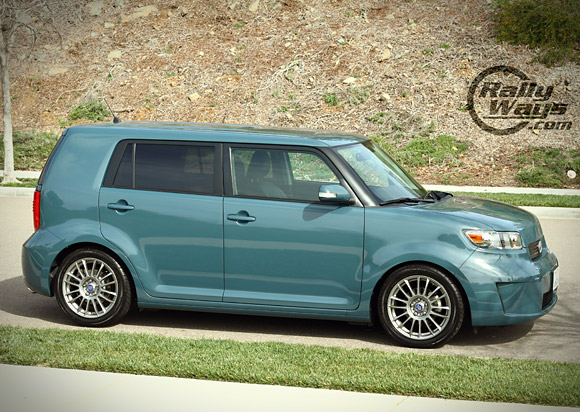 You’ve probably heard that Toyota’s hold their value really well. But here’s a little tidbit that you’ve probably not heard before until now. The gen 2 XB is amazing at holding its value. In fact, off the top of my head I can only think of one more car that holds its value as well as the XB, and that is the Toyota Tacoma. While the Tacoma does better, because even high-mileage ones hold their value incredibly well, a low-miles XB is hard to beat. Let me put it this way:

I bought mine back in 2008 and at the time the price was something like $16,500. This Hypnotic Teal Mica XB only has about 33,000 miles on it now. In the excellent condition it’s in, Kelly Blue Book prices it at $13,054 in stock form. With the upgraded Spaco Pista Wheels, Sumitomo tires, cross-drilled and slotted brakes with ceramic pads, Tanabe NF210 lowering springs, Clazzio leather interiors and billet aluminum shifter, this XB is slated to sell for $15,000. If you take the stock XB KBB value of $13,054, minus $16,500 selling price in 2008, it means I only paid roughly $3,500 in depreciation over 3.5 years. That’s amazing if you ask me. Of course, you still need to add tax and financing costs and the number goes up quite a bit. But that’s true of any other car anyway. For depreciation alone, the numbers are VERY impressive. 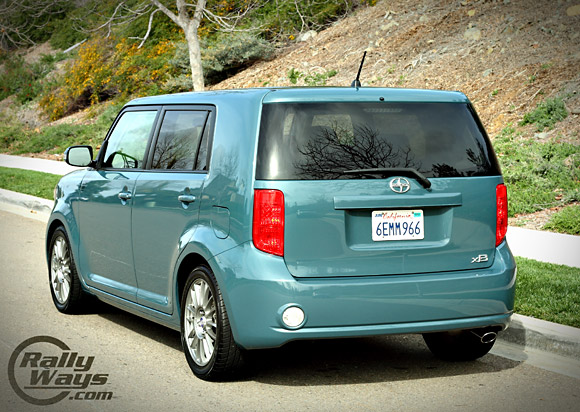 The best thing about the Scion XB is that it can do a lot, and do it well. With the seats down you can easily carry an entire mountain bike in the back. That same space will swallow up 4-5 surfboards easily. If you ride a longboard, a nice Thule or Yakima roof rack will do the trick. The car will carry your entire family with comfort. It’s quite competent on the freeway, and while its no sports car it handles very well on twisty canyon roads. It’s not fast, but with the 5-speed manual transmission it feels faster than it really is. Between 3,000 and 4,500rpms the car pulls really nicely. And, due to the small 4-cylinder engine, fuel consumption doesn’t seem to go up that much when you choose to drive it hard.

Another nice thing is you can knock yourself out with aftermarket parts for the second generation Scion XB. Search around the web. There is no shortage of custom parts for it.

The Scion XB’s instrument cluster is uniquely place near the center of the dashboard. Car journalists complain that the dials in the center are awkward. Trust me, they are not. In fact, it’s even better. When you are driving you typically use peripheral vision to read your speed and revs, so it really makes no difference if they are centered in front of you, or a little off to the side as they are in the XB. In fact, I find them easier to read, as there is never a time when my hands or the steering wheel spokes are covering the gauges like it happens in some cars.

Some people hate digital speedometers, but the one in the XB is brilliant. I like the look of traditional needle speedos, especially on cars that need to carry over a heritage or some kind of classic looks. But the XB is none of those things. It’s completely modern. The great tracking digital speedometer on the XB works perfectly. There’s no excuse to not know exactly how fast you are going. In the case of the XB, how slow you are going. 😉

If you already have an automatic… Sorry, but you bought the wrong car.

The generation 2 XB does have more power than the old one, but it’s still no speed racer. Specs on paper claim 0-60 in 7.8 seconds, but it takes me about 10 seconds without launching it. However, the car compensates for the lack of speed with a fun driving experience. In fact, when pushed hard, the XB’s 5-Speed manual transmission shifts effortlessly. I find that when hitting 4,000 RPM, shifting feels like the lever is being sucked into the next gear. It’s awesome! It feels like the tranny is asking me for the next gear as I pull the lever. I’m putting a lot of emphasis on the manual transmission because honestly, it’s the way to go on these. The automatic makes the lack of power more evident. It’s also boring. Given the manual tranny is so good and so fun, there’s really no reason to buy the automatic. If you don’t know how to drive a stick, it’s worth that you still buy it manual and learn.

If you already have an automatic… Sorry, but you bought the wrong car. Haha.

Like just about all Toyota manuals, the clutch squeaks like you just stepped on a mouse every time you depress it. The ride is stiff and sporty like, but thanks to the weight of the box, it does roll in corners quite a bit. But the worst part is that you feel EVERYTHING that’s going on below the tires. The suspension is somewhat unrefined and all bumps, cracks and roughness of the road surface is felt in the cabin. When hitting large obvious imperfections on the road, the suspension almost feels like it’s bottoming out, although it really isn’t.

Stock stance, it looks like a monster truck. I’m not kidding. You might be numb to it by now, but take a good look at the wheel gap at the back between the top of the tire and the fender. It’s a ridiculous 4 inches! Thankfully, good aftermarket lowering springs are readily available. No need to slam it. With Tanabe NF210 lowering springs, I leveled my XB to look more poised. It now looks like it should look from factory, and I never, ever scrape the ground.

The iPod interface is nearly useless and just plain stupid.  I completely stopped using it. Sifting through your music in the tiny screen will take you half your trip time, without even setting off. Plus, when the iPod is connected, you can’t control it via the iPod screen, only through the stereo’s crappy interface. That’s why I preferred burning hundreds of MP3 songs into data CD’s and using that instead. Of course, you could plug the iPod into the 1/8” inch jack next to the iPod interface connector. But, if you know anything about car audio, you are aware this is a less than stellar way of listening to your music.

Car journalists complain about the eject and power buttons on the stereo being in the wrong location making reaching the power button hard. But honestly, it’s not hard at all. You can reach it just fine. The iPod interface problem is much more relevant and the eject/power button location is just car journalists trying to find something to nitpick about. As much as I respect some of them, they failed on pointing out the real problem – the iPod user interface.

The interior space with the back seats down is incredible. I can fit an entire drumset along with some audio equipment just fine. But that’s only good if it’s just you and a passenger. With the rear seats up, the trunk space is actually quite limited. I fit more stuff in the trunk of my Ford Mustang than I can in the XB when the rear seats are up. It’s almost like a single cab pickup truck – lots of cargo space, but only room for 2 people. At least it can convert to seat 5 people when you don’t have to haul stuff around. Big points to the XB over the pickup for that!

Fuel economy is also less than stellar, due to the increased weight and size of the car, plus bigger engine between the gen 1 Scion XB and this, I average around 24MPG with stock wheels. Th bigger Sparco Pista 17 inches wheels with Sumitomo HTW A/S P01 tires that I installed now yield me 22 MPG – oh well. Certainly not bad, but it could definitely be better.

I don’t regret the purchase of the XB one tiny bit. In fact, it’s one of the best car purchases I’ve ever done. It has been reliable, useful and fun to drive. It’s carried my music gear, it’s taken me to the beach and it’s carried my family in perfect comfort. What’s better is that I’ve enjoyed this car for 3.5 years without taking a huge slap in depreciation. Now, thanks to that, as I’m ready to sell the XB and move to a sports car, I’m happy to inform I have a nice bit of equity to allow for a good downpayment on the new car. I could not say the same thing had I bought something else. 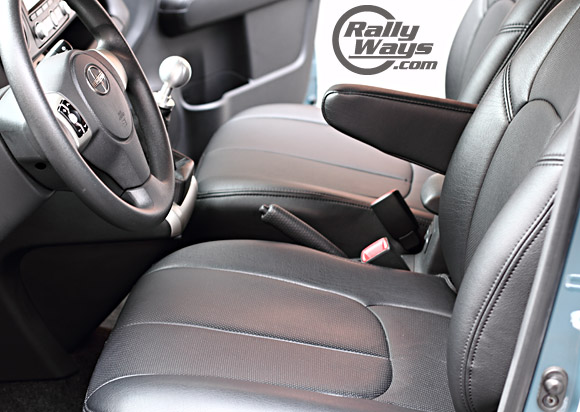 I may be moving to a different car, namely a sports car for my new found interest in track. At the same time, I’ve considered moving to a Toyota Tacoma for the sheer 4×4 prowess. I’ve owned many new and used cars in my lifetime, and the Scion XB is at the top of the best buys I’ve ever done. Even after moving on to other things, this little Scion will always hold a dear place in my heart.