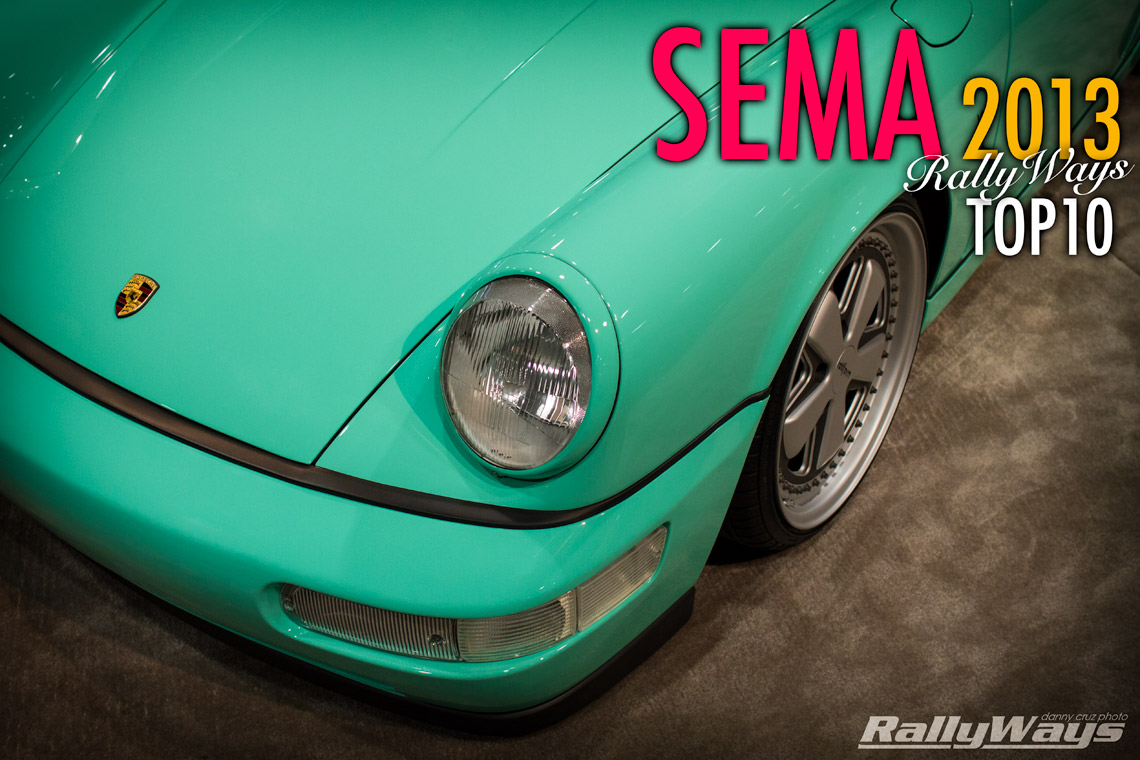 After SEMA Show is over we get to sit at our computers and sift through the amazing content we brought back from the show. This is when we start really making lists of the best of the best.

While we’re busily shooting photos and publishing content live from SEMA, it is truly impossible to draw a real top 10 best cars list. It is not until the dust has settled and one has had time to really think through it that this list can come about Not to mention, emotions are at an all time high while at the show and there is a car-sensory-overload that prevents anyone from making rational decisions of who’s best. 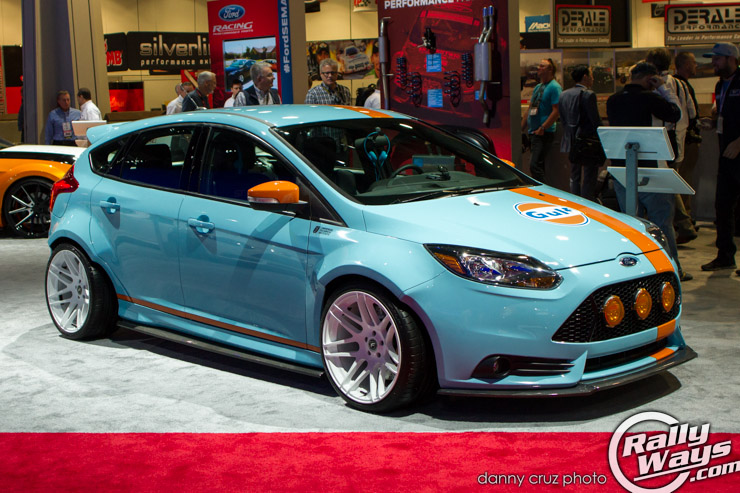 Admittedly, covering cars in Gulf livery is getting a little out of hand. Mostly because the majority of those cars being decorated with one of LeMans biggest names has very little to nothing to do with the race. However, given Ford and Gulf Gasoline pretty much go hand in hand, we’ll give them a pass on this one. Their SEMA 2013 Gulf Ford Focus ST made us stop, stare and shoot a bunch of pictures. For this we’ve chosen it as part of our SEMA 2013 top 10. 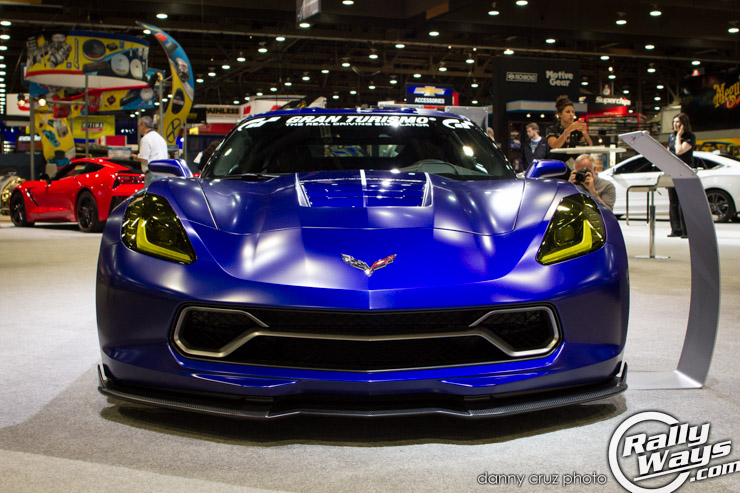 There were plenty of C7 Corvettes at SEMA 2013. In fact, in our SEMA 2013 Day 1 photos coverage we called it the new FRS. This one however stood out over the rest. The violet-blue satin wrap was stunning as was the custom wing and bits of carbon fiber trim. To top it all off, the racing yellow headlights went perfectly with the design. The awesome surroundings at the Chevy booth made it all that more appealing. Truly one of RallyWays’ favorites. 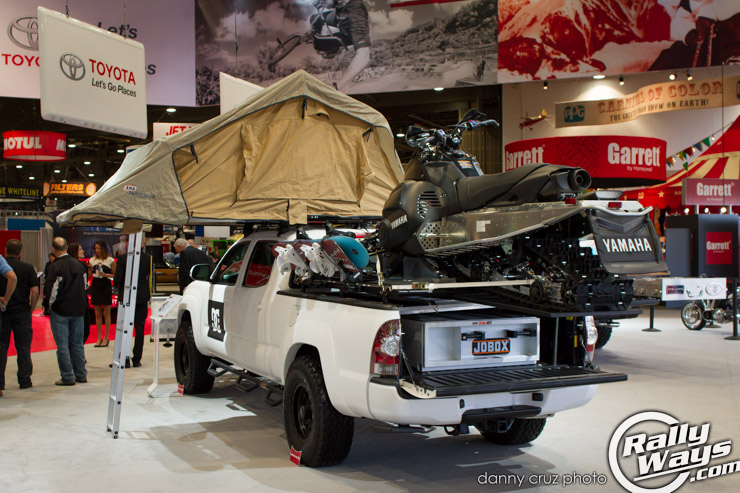 Why a Toyota Tacoma over the mounds of V8 Tundras and F-150’s all over SEMA 2013? First of all, we own one – The RallyWays Toyota Tacoma. Seeing a modded Tacoma only make us imagine the things we’d like to do to ours. Secondly, V6 maybe, but it’s the best looking truck of the bunch. Seeing what Toyota and DC did to this one is pretty darn cool. A little over-the-top, but then again, so many other SEMA builds are just that. We specially liked the rough-to-touch white finish and the loads of gear. We still have to mention the Toytec Tacoma on the second level of South Hall. We really couldn’t make up our minds which we liked best, but we finally chose this one because we saw it first. 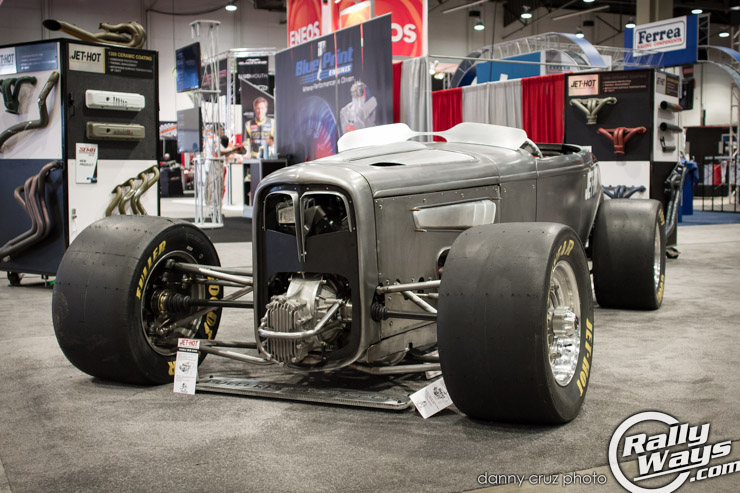 You should have listened to the full story behind this all-wheel-drive, open-wheel, versatility machine. Based on a 1932 Ford Roadster, this car was built by Bryan Fuller. This car came about as a tribute to a guy named Emmett Burton who had started building one back in the seventies to do the Cannonball Run. When he saw the movie came out depicting the run he wanted to do himself, he got demoralized and stopped working on the car. This car is in essence a continuation of that project. There’s a full story to come about this car so we’ll leave it at that for now. By the way, it has 900HP. Yep. 900 horsepower in a car with the weight of an empty bathtub. 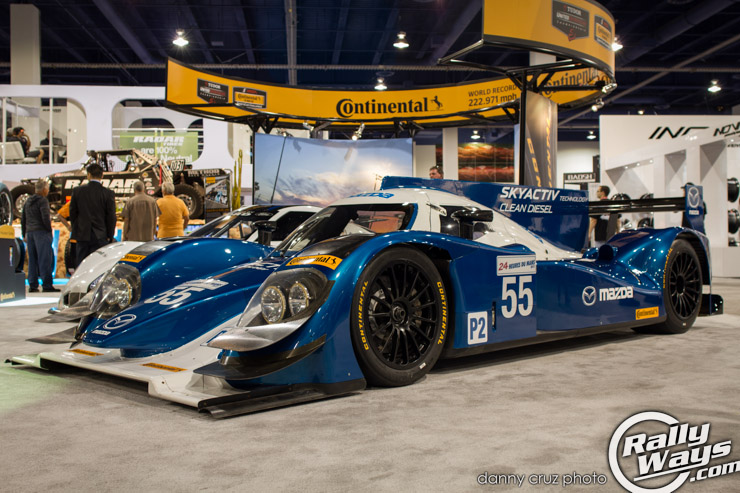 Mazda makes some of the coolest racing cars in the world. They might not be in Formula 1, but their roots in racing are similar to Ferrari’s – in Japanese terms. We don’t care if you disagree by the way. Of course, their roots in the 24 Hours of LeMans go really deep as they are so far the only Japanese car maker to have won the event – Mazda won it in 1991 with the rotary-powered Mazda 787B. Here we have a new era in Mazda Motorsports and it’s a Skyactiv diesel-powered LeMans racer. The car is an LMP2 contender to be driven not only at the 24 Hours of LeMans but also at the American LeMans Series and the World Endurance Championship. The team, called Dempsey Racing of course features actor Patrick Dempsey as a driver. There’s no denying this is a very cool car, and one of our very favorite cars of SEMA 2013. 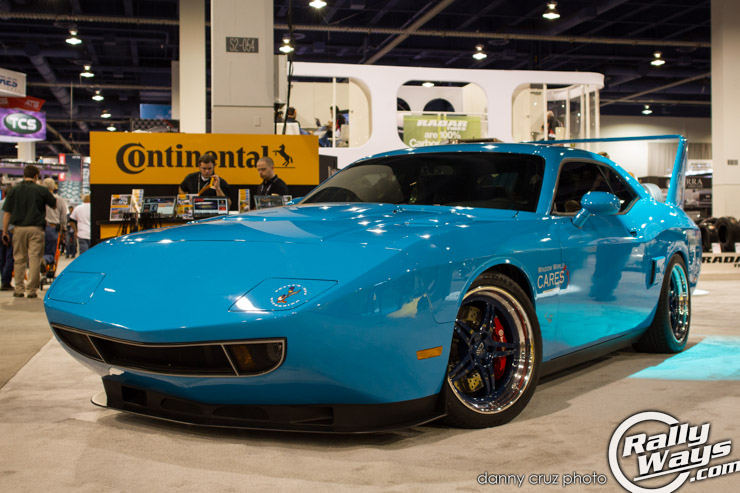 SEMA car builders have gone crazy modding Camaros to look like Pontiac Firebird Trans-Ams. After all, it doesn’t look like GM would ever make one anyway. To our surprise we saw this Dodge Challenger-turned-Plymouth-Road Runner at the Continental Booth. And man this thing was cool to see! The whole build looks awesome, creative, yet cohesive. The details are perfect down to the giant wing and the pop-up headlights. The pop-up headlights will of course prevent the car from ever being legally mass-produced because the DMV and DOT hate pop-up headlights. But we love them! 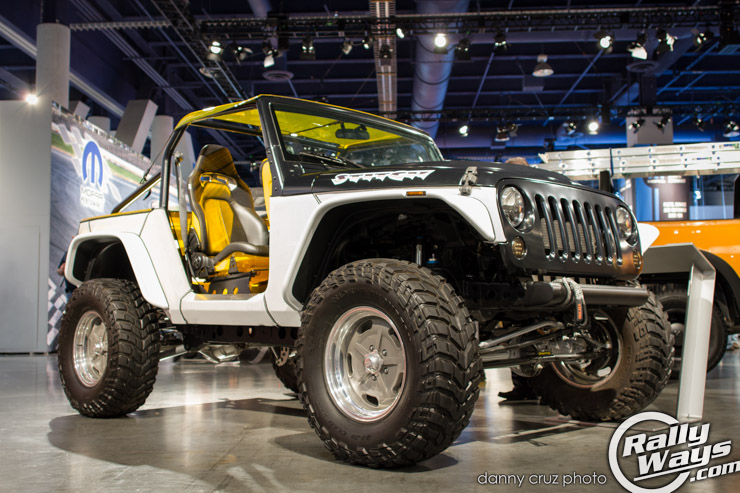 Look, a Jeep! We’re generally not Jeep enthusiasts, but dang this thing was fine! The entire build was hugely impressive and literally made us stop for 20 minutes while we carefully examined every bit of it. The lift, wheels, tires, lightweight setup and racing seats were a very welcome sight amongst all the over-built offroad machines at the show. The yellow canopy made us think of those funny looking translucent color visors people sometimes wear to the beach. Which, immediately had us imagining driving this at the beaches in Baja. Heck yes! 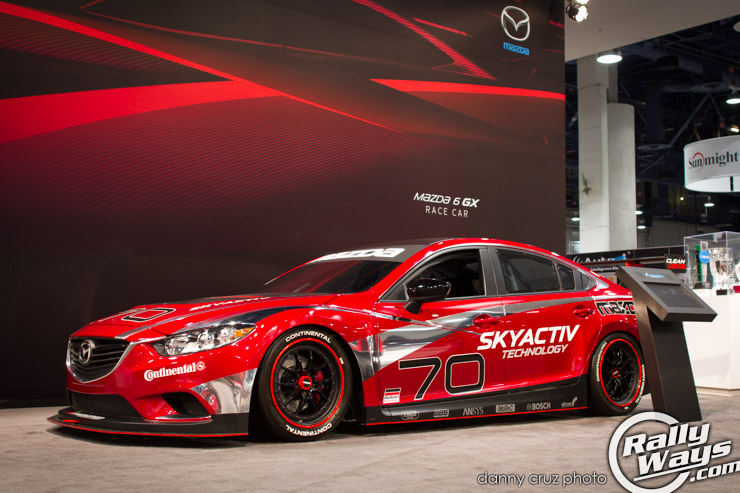 And it’s the second Mazda to make our top 10 list. When Mazda gets an idea, they ride it and ride it until they are fully satisfied. Of course, like the LeMans race car above, this Mazda 6 GX is a diesel. Yep. While they simmer the rotary engines on the back burner, Mazda is busy playing around with their Skyactiv technology and diesel engines for both road and race cars. This Mazda 6 race car is perfect example. The car looks amazing down to the graphics. The only thing we wished it had was the iconic racing yellow headlights we keep seeing on all the actual racing photos of the Mazda 6. 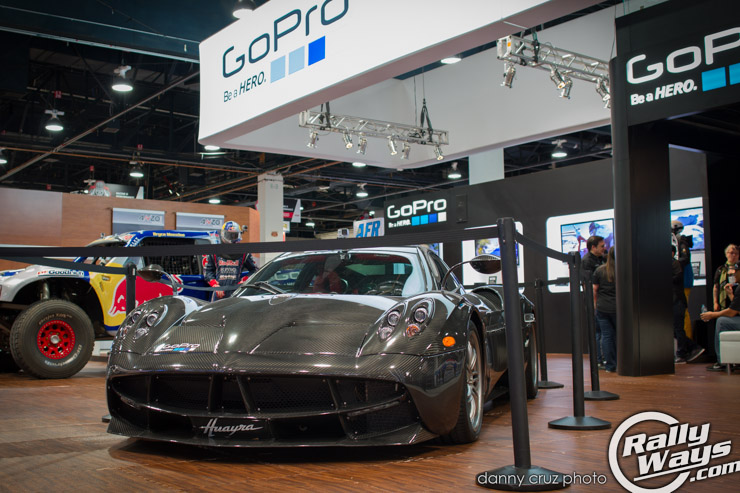 This was easily the hottest car of the entire show. For a while we thought it was the only hyper car at SEMA 2013, but then we found out about the McLaren-Mercedes SLR outside at the DUB show. Nevertheless, a Pagani Huayra is at least 5 times more impressive than the SLR. Thanks to the folks at GoPro for bringing this beast of car out for us to enjoy. This is one of those cars that you haven’t REALLY seen until you have seen it in person. On TV and in pictures it’s nothing less than a unicorn. 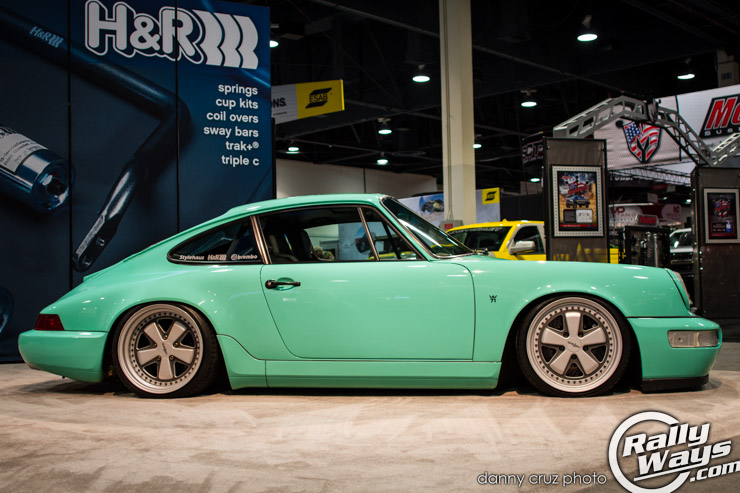 Our number 1 favorite car from SEMA Show 2013 was this mint green Porsche 911 964 at the H&R booth. This Porsche 964 was slammed on H&R suspension and Rotiform wheels. The minty green color suited the car perfectly yet is not the only good-looking mint green classic Porsche we’ve ever seen. The 964 Porsche 911 just so happens to be one of the best-looking 911’s when slammed. Perfect choice. The car was impeccable inside and out. The interior was beautifully appointed with mostly charcoal-grey suede throughout. This was by far our favorite car in a grandiose show that is unfortunately lacking in classic Porsche 911’s.

Honestly, this list was harder to compile than we will immediately admit. Not because of the cars that made it, but because of the cars we had to kick out in order to trim the list down to only 10. The quantity of amazing cars at SEMA is vast. Looks and likes are all subjective. There were at least 25 other cars we would’ve loved to include in this list of SEMA 2013 Top 10 Best Cars, but as the title suggests, only 10 could make it.