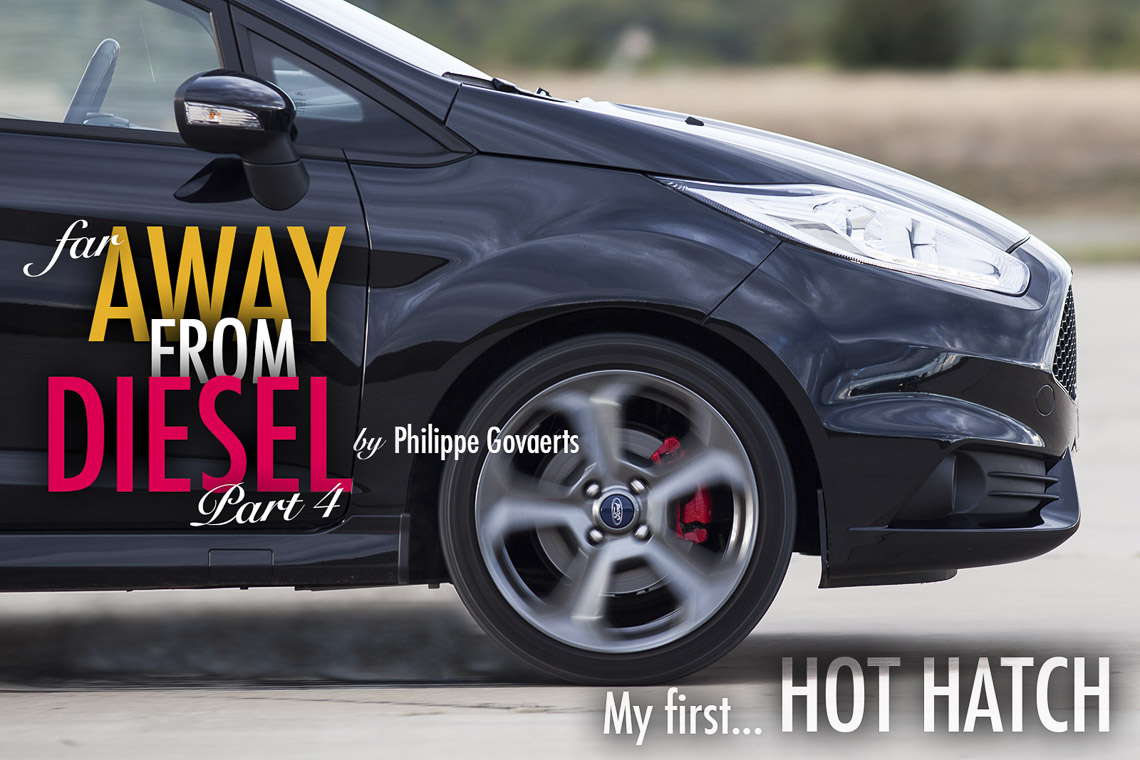 The search for my first hot hatch – Part 4. After driving the 2 other cars on my shortlist, it’s time to test drive the Ford Fiesta ST (MK7).

Now that the Abarth and the Renault didn’t pass my personal tests to become my next daily driver, there was only one car left on my three-car shortlist. I can’t really explain why, but I never really had a connection with Ford whatsoever. Sure I love the RallyWays RallyFiST, but I had never checked out a Fiesta ST up close although Danny told me I should. I wouldn’t have guessed that the Fiesta ST would be the only car left on my list, several weeks down the road. 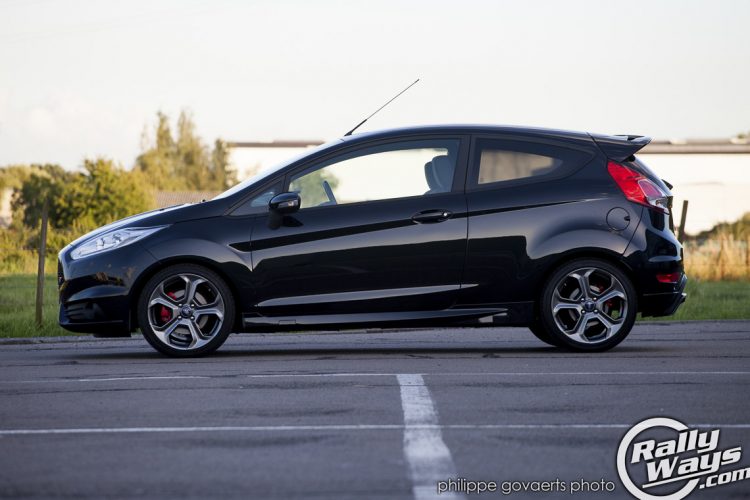 In comparison with the Clio RS, it was not easy at all to arrange a test drive with the FiST. None of the dealers in our surrounding area here seemed to have one in stock that could be used for test drives. One salesman even told me, “These cars are not tested. The people who buy them know exactly what they are buying and they don’t need a test drive.” Sure, but with the adventures I had with the two previous cars on my list, I for sure wasn’t going to order a new car without having tested it.

After numerous phone calls and visits to various dealerships without any results, I got a bit frustrated and started going through the used car ads online. At one point, I found one that was for sale at a used car company about 40 minutes from where we live. I quickly gave the seller a call and he agreed that I could test it out the next day. I took my wife with me just as I did with the previous tests.

A little history about this particular Fiesta ST

When we met with Tom, the salesman and owner of Autohandel Tom in Zele, Belgium, we learned that he had been running his business for the past 20 years, with the regular help of his father. Some 15 years ago, he decided to specialize in used Porsches. Tom had a handful of cars for sale including a couple of nearly new 991 911s, two 997 911s, a Cayman and two Boxsters. The Fiesta ST being the only non-Porsche car, it didn’t really fit the picture of his business, so I immediately asked him how he got it.

Apparently the car was bought new 8 months prior at the Ford Dealership in Antwerp. The car was purchased by a 45-year old guy that was actually looking into buying himself a used Porsche Boxster as a birthday present. The man decided to get rid of his old Diesel car already and quickly bought this Fiesta ST (which the Ford dealership had in stock) as a cheap sporty appetizer while searching for the right used Boxster. About 8 months and 7500 miles later, Tom sold the man a Porsche Boxster and the Fiesta ST got traded in. 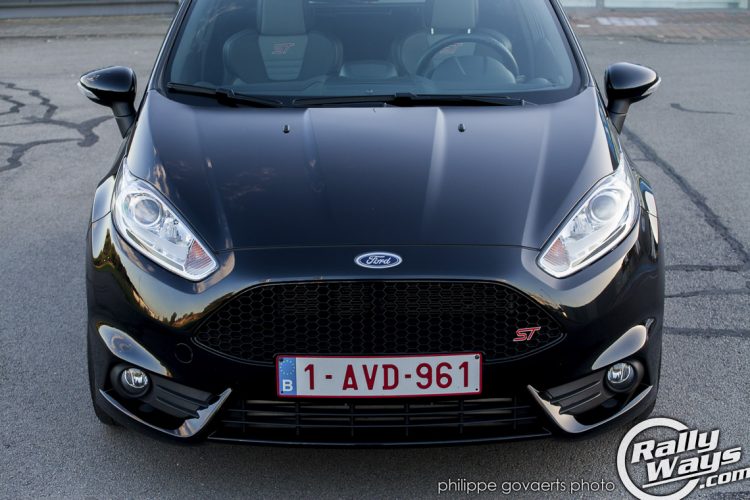 AS far as looks go, both my wife and I fell in love with the car immediately. Not only is it a beautiful car to look at, but the Panther Black metallic paint combined with the grey Recaro seats, the dark Rado Grey 17” alloy wheels and ST2 spec was the combination we both liked the most. It really looks like a sleeper. If you compare the Euro version of the car with the US version, there is one big difference between them which is the amount of doors. EU versions have 2 doors, while the US Spec car has 4 doors. In my opinion, the 2-door version looks a little bit more aggressive, but I like both.

The interior is something where they didn’t spend too much additional money on, except for the great Recaro seats. The dashboard looks about the same as the one in a regular Fiesta, although you get an ST embossed sportier looking steering wheel, a fancier metal gear knob and metal pedals. The headliner is black which enhances the sporty character and looks of the car as well. The ST2 spec car has the illuminated “ST” scuff plates on the door sills. Especially in the dark it adds a nice touch which reminds you that you are about to get in something more special than a regular Fiesta.

After briefly going through the car’s options, we went for a drive. Remember I told you how much I liked the looks of those Sabelt bucket seats in the Abarth 595 Competizione but they weren’t comfortable to sit in at all? Well, the Recaros in the FiST not only look amazing (although less track oriented than the Sabelts in the Abarth) but they are so comfortable! Just taking place behind the wheel already made me smile.

At first, when gently warming up the engine and driving at low RPMs, it seemed that there was no engine note inside the cabin at all. However, after it got warmed up and I started to get into the higher RPM range the sound gets more obvious, roary and alive. It’s a kind of sound you get addicted to. The kind of sound that makes your wife say “do it again, do it again!,” every single time she gets in the car. In the lower RPMs there is of course a bit of boost threshold from the Turbo, but there is not the kind of turbo lag like you would experience in the Abarth.

The gearbox feels smooth and shifting goes very easily. The same goes for the clutch pedal. I absolutely love the fact that it has a proper manual gearbox, but that is very personal I guess. This generation of Fiesta ST is the only production Fiesta equipped with disc brakes on the front and back, and they do a great job!

The electrical power steering is ok, for me it does the job. No complaints on that at all. The FiST is not equipped with an LSD, but it does have Torque Vectoring which removes most of the understeer in tight corners. Of course due to the fact that this is still a front wheel drive car, it does sometimes feel a bit nervous on uneven roads, when putting your foot down on the accelerator pedal.

The suspension is stiff, very stiff. I think it is comparable with a Clio RS with optional Cup chassis, and maybe even a little stiffer. Especially at low speeds you feel the car bouncing a bit, but not so that it bothered me. I think it’s really great. For the European market, the cars leave the factory on 205/40-R17 Bridgestone RE050A summer tires. Apparently they aren’t too bad but they have a very stiff sidewalls compared to tires in the same category from other manufacturers. Replacing the tires with Michelin Pilot Sport, Continental SportContact 6 or Yokohama Advan Sport V105 would remove the “sharp edge” during low speed drives or on bad roads. 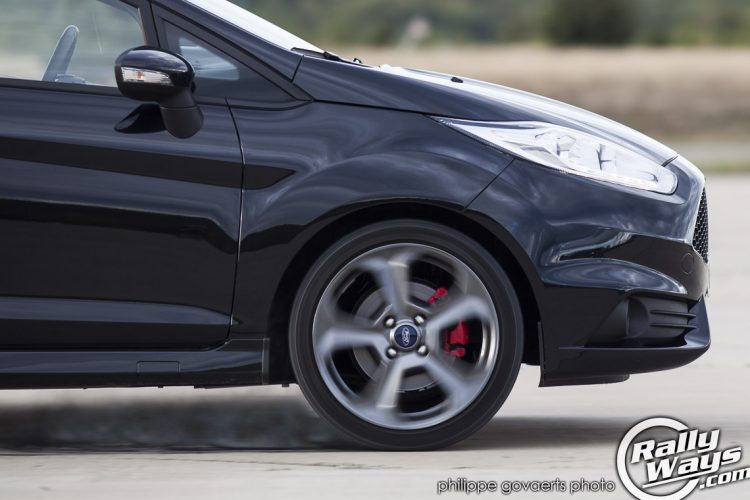 After driving less than 5 minutes in the FiST, it already became clear that this was the car I had been looking for. The 1.6L turbocharged engine which gives you 182 horsepower or even 200 horsepower on a 15 second overboost function is more than enough to have fun. Combine that with a fantastic chassis, suspension setup and the low weight of a Ford Fiesta and you have a very good recipe for a pocket rocket. Also the price is right, because you can get yourself a new one for between $21,000 USD – $23,000 USD, depending on the options you choose.

As you probably already guessed from the pictures in this story, my wife and I didn’t go for a new one but decided to buy the nearly new black one we tested. And we bought it straight after that test drive! With a price of € 15,500 and still having factory warranty, it was an absolute steal which we couldn’t refuse. I have been driving the car for a little over two months now, and it meanwhile has a total of 11,000 miles on the odometer, and I still love it. It’s the right one for me as a daily.

This whole search proves that choosing a car is very personal. Never buy a car because one of your friends has one and he likes it. Sure, you might like it too, but it is oh so important to always try it before buying it. Although reviews might say nothing but positive things about a certain car, it might still not be that great for you personally. So go test it!

Be sure to read the other parts of this story. Links are below: