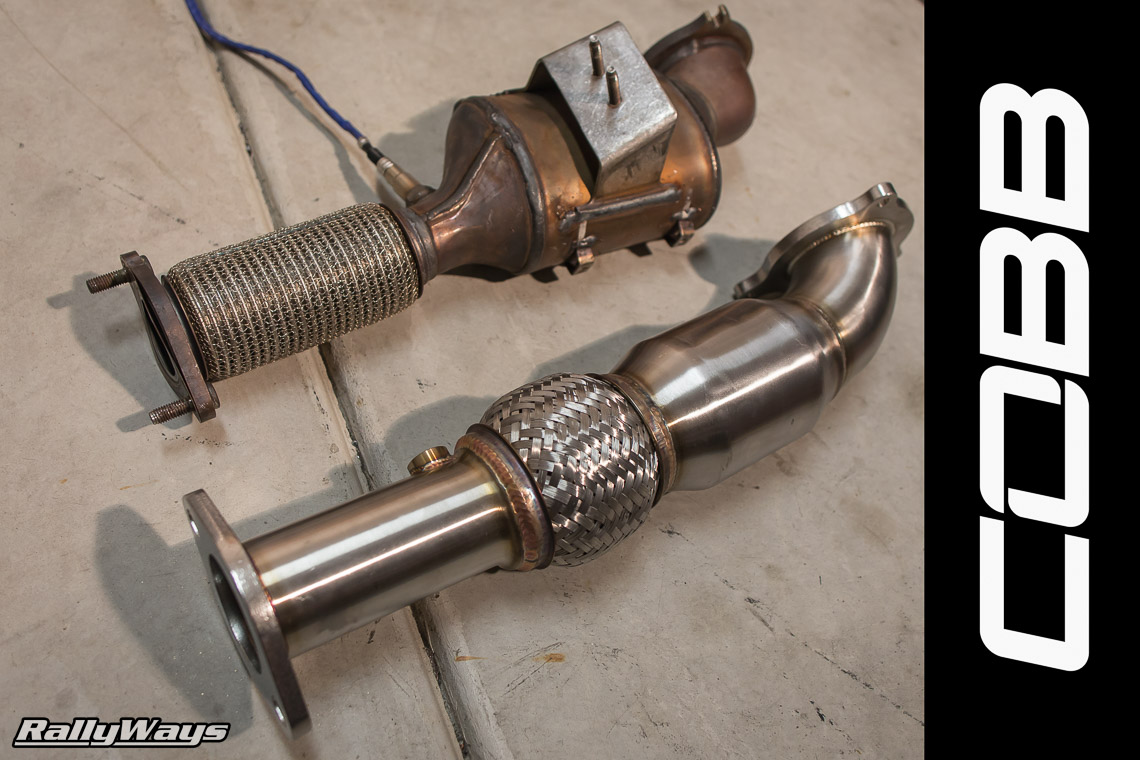 Here’s my favorite Fiesta ST mod, the COBB Tuning Ford Fiesta ST Downpipe. It’s a beautiful piece of fabrication, really opens up the exhaust system and sounds amazing. However, it’s a mod that doesn’t come early in the game.

The COBB Tuning Fiesta ST Catted Downpipe is a direct factory replacement made of 304 stainless steel. It features a precision cast/machined turbo flange for perfect fit, a high-flow 200-cell metal spun catalytic converter and a smaller and stiffer flex unit than that of the factory Ford downpipe.

The COBB Fiesta ST Downpipe is also lighter than stock and loses the stock heatshield. Of course, it also has the pre-cat and post-cat O2 sensor bungs.

I like running a catted downpipe. I’m not a fan of catless unless the car is going to be a 100% track car. This is for various reasons, both moral and functional. The current volume level of the exhaust is really fun and I woulnd’t want it any louder for the street. Not to mention, I don’t want the smell of unburnt gas and the extra contamination that comes from going catless.

The COBB Tuning Catted Downpipe for the Fiesta ST is truly a gem. It’s really beautifully made and a shame that it sits so deep down in the engine bay that you can’t even see it. 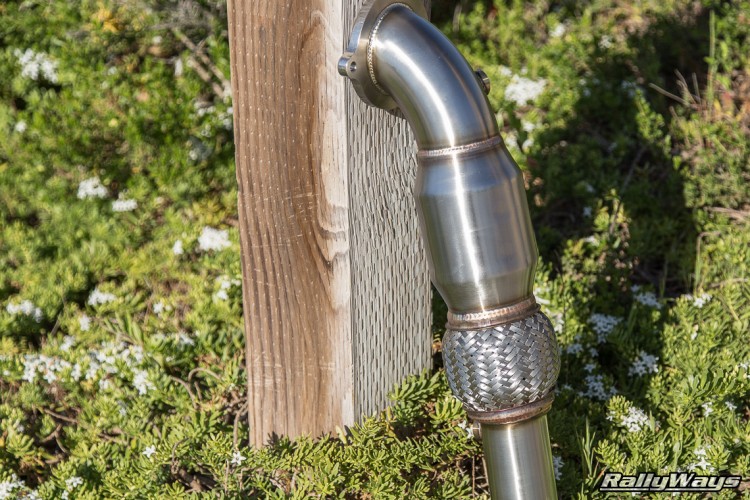 As I said earlier in this piece, the downpipe does not come early in the game. This means, you can’t just buy the COBB down pipe and install it and go drive. Not only do you need a tune, but the downpipe will really work the best when paired with the Fiesta ST front mount intercooler and intake. This is because you need to be able to manage the extra heat associated with the higher flow. Since you are also changing restrictive parts from the exhaust and turbo system, changing restrictive parts from the induction system makes sense as well.

The COBB OTS tune (off-the-shelf) for the Fiesta ST downpipe is the stage 3 tune for either 91 octane or 93 octane gas. For this off-the-shelf map to work, the downpipe needs to play together with the intercooler and intake. You might be able to get away with just the downpipe and the intercooler if you get a custom tune. However, that defeats any money savings from not getting the intake because the custom tune itself would end up costing twice as much as the intake. Plus, you’ll want the COBB Accessport anyway in order to load tunes. Might as well make sure to follow the upgrade path in the correct order before you get to the downpipe.

For more on that, check out the RallyWays article about COBB Tuning Fiesta ST Stage Packages.

When done right, the COBB Tuning Fiesta ST Downpipe will easily become your favorite mod. I’m running mine with a complete Fiesta ST Stage 3 package. This includes the catback exhaust. However, I had installed the catback exhaust back at Stage 1, and while it had a slightly louder and deeper exhaust note it wasn’t that much louder than stock. Plus, the tone was very close to that of stock, hiding those juicy burbles, pops and crackles on overrun.

I couldn’t imagine running this car anymore without this downpipe. Truly awesome and I really love it.

Ah, but when I paired the downpipe to the catback exhaust, that’s when the magic happened! The exhaust system immediately opened up. At slow revs, when you’re crawling around below 5 MPH in parking lot, you can hear something there… You can hear the urge and power just waiting to get out. There’s this low-level burble and intention coming from the engine that’s quite intoxicating, in a good way.

Then, when you open her up, it’s amazing! The engine sounds awesome, both inside and outside the car. At high revs, approaching a corner on the street when you let off the gas, the pops and crackles from the system are all joyful. Same thing goes for upshifts and downshifts. Just fun stuff!

I couldn’t imagine running this car anymore without this downpipe. Truly awesome and I really love it.

Ah! But it doesn’t come cheap. And I’m not talking about the purchase price or even the fact that you need to make sure you’re past the Stage 1 and Stage 2 mods first — I’m talking about installation. You may do a lot of the work yourself, but this is one that might be worth taking to a professional.

See, a lot of other parts have to come off in order to install the COBB downpipe. Even so, it’s a tight squeeze. The COBB downpipe itself is really not the issue however, the issue taking the Ford stock downpipe out. That’s the real trick right there.

The stock Fiesta ST downpipe is bigger. It also has a big ol’ heatshield attached to it. Finally, it has this ginormous bracket welded on to it with two big bolts that won’t come off. This makes removing it a real chore.

I did the work myself. Since I was installing the intake and intercooler in the same session, I had all those stock parts off already. This means I had removed the plastic cowl near the top back of the engine bay as well and the front bumper, lights, stock intercooler and what not. The COBB catback exhaust was in place however, along with the new urethane exhaust hangers. I had installed those the week prior — because it was a quick and easy 2 hour job.

When removing the stock Fiesta ST downpipe I quickly found out I had to move the catback exhaust out of the way to make some space. This meant I had to remove the center chassis brace near the middle of the car that prevents the midpipe area of the exhaust to move lower. I had removed this already to install the catback, but I had to do it again now. I also removed one or two of the cat back exhaust polyurethane hangers. Then, I was able to pull the front section of the catback exhaust low enough to pull the stock downpipe down and out the back.

First, COBB’s Fiesta ST downpipe has a stiffer flex unit. For this reason, it doesn’t need the mounting bracket as the pipe stays firmly in place with just the turbo and exhaust mounting points. You won’t be using the mounting bracket location that the stock downpipe uses — nor the hardware. In fact, I put those back on the car in the same location for safe keeping. However, make sure to tighten then to spec anyway. I lost one of the nuts because it vibrated itself out because I didn’t torque it to spec. No biggie, as the nut was just sitting there on an empty stud – But if I ever want to bring the car back to stock I’m going to source that nut.

The other thing to keep in mind is the fact that the COBB downpipe doesn’t have a heatshield like the factory unit. This is fine, but the stock heatshield has some little mounting brackets to hold one of the O2 sensor wires off the hot pipe. When you mount the COBB down pipe, make sure to reroute said O2 sensor cable. Otherwise, Murphy says it’s going to land right on the downpipe when it’s hot and burn your car down. This was only a minor issue. What I did was use a zip-tie to route the O2 sensor wire away from the downpipe. Worked like a charm.

Finally, you’ll be taking the heatshield off the stock downpipe at some point during the removal process. This leaves you with 4 little screws that you won’t be using again. In fact, if I recall correctly, these where the only bolts that I had nowhere to put back in the car during the entire stage 3 upgrade. Everything else somehow went back in place somewhere. Even the nuts that weren’t needed to mount the new downpipe still went back on the car for safe-keeping (that is until I lost one of course).

The reason I point out the above is because when I was done with the entire process, I had 4 screws left over and I couldn’t figure out what they were for. Keep in mind, I had jumped all the way from Stage 1 to Stage 3. So, in one shot I installed the COBB Fiesta ST downpipe, intercooler, charge pipes and intake. That was lot of parts, screws and nuts coming off the car and back on in one shot. Easy to lose track of what’s what if you’re not careful.

I was pretty careful, but near the end of the process I was getting pretty tired and my brain had shut off. I had taken a break the night before halfway through the process, but towards the end I decided to finish the second part of install in one night. Again, I’m talking about all the stage 3 parts here — not just the downpipe. My son who was helping me with the install, literally fell asleep under the car around 4 in the morning. I had to wake him up and send him to bed. Just minutes before, he kept saying, “No dad, I’m fine. I’m not tired. That is, until he fell completely asleep.”

Anyway, what I was trying to say was that when I was done I had these 4 screws left and I couldn’t figure out what they were for. It literally took me an hour of poking around trying to find out where they went. I finally figured out they were the downpipe heatshield screws and they weren’t supposed to go back in the car anyway. What I did then was I mounted the heatshield back onto the stock downpipe for safe keeping and put the stock pipe away inside the same box the new downpipe came in. 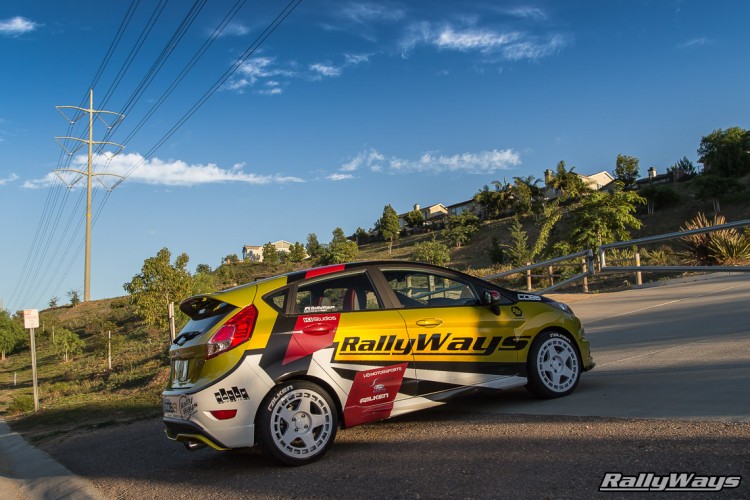 Around 5am, I flashed the COBB Stage 3 91 octane map using the AccessPort V3, took a shower and was at Cbad Cars and Coffee Carlsbad by 7AM — smiling the whole way there. What a transformation!