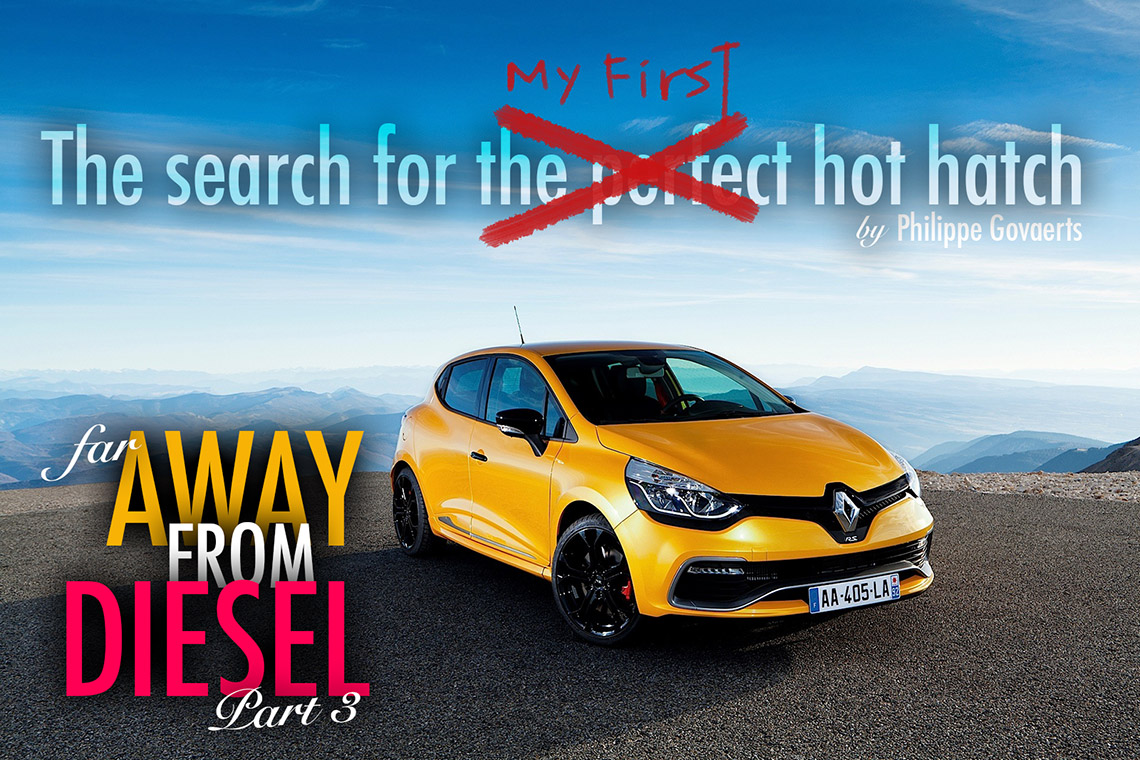 French car manufacturer Renault is well known in Europe. Mostly for their safe and inexpensive family cars compared to German rivals. However, they do have a couple models in their range for true car enthusiasts like us. One of which is their pocket rocket, their small FWD hot hatch, the Clio RS. 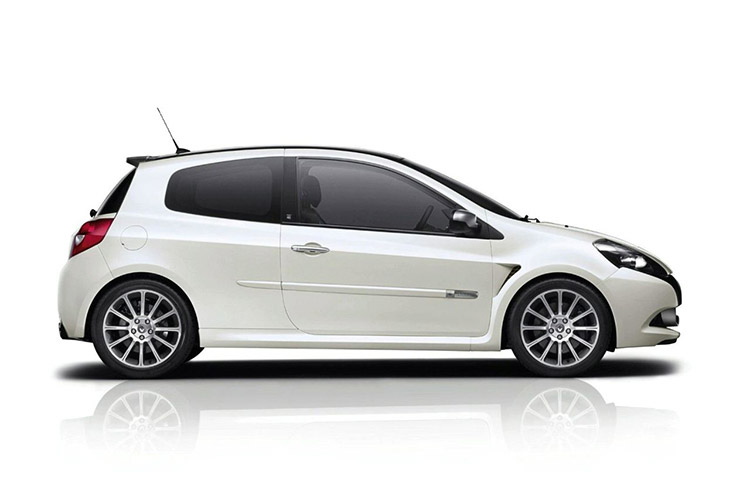 Previous generations of the model have been praised by European Petrolheads for the past two decades. Specifically the 2009 – 2012 Clio III RS 200 version with the optional Cup-chassis, is an amazing driver’s car. I’ve ridden shotgun in them several times in the past 7 years including a lap on the Nordschleife. At the Nürburgring they were the most popular rental cars for several years, and the racing version is still raced to date, during the Nürburgring VLN series and 24H race. Although not new, this car could have been ideal for my purposes. Unfortunately with its 2.0L naturally aspirated 4-cyl engine (200HP), it’s not tax friendly here in Belgium. Due to this and as explained in the first story of this series, I’m looking for a car with an engine displacement smaller than 2.0L.

Although the production of the Clio III RS stopped in 2012, Renault did start the production of its sequel back in 2013. It’s called the Clio IV RS 200 EDC. In comparison with its predecessor, it’s equipped with a 200HP, 1.6L Turbo (NISMO derived) engine instead of the 2.0L naturally aspirated powerplant from the Clio III RS. They also ditched the manual gearbox for an electronic dual clutch gearbox with paddle shifter.

Those two major changes were not welcomed by Renault’s hardcore Clio RS fans. Why? Because it would remove the high revving NA engine with its typical linear power output they all loved, as well as the stick shifter. Both important aspects that had always characterized the Clio RS. Also the suspension on the new car is said to be less harsh and more suitable for every day use (even when going for the optional Cup chassis setup). Last but not least, the new model also gets 2 additional doors.

For me personally, this new Clio RS looked fine. I wasn’t used to the old Clio as I never owned one, so why would I bother about the changes? I can both appreciate naturally aspirated and turbo charged engines. I have never tried the electronic dual clutch gearbox before, so that would be new for me to try. In my head, I was 90% sure that the Clio IV RS was the one that would come out as the winner. Did you know that this car is produced at the former Alpine motorsport department (now housing Renault Sport dept) located in the French city of Dieppe? That fact got me excited too, I must say!

Making an appointment with a local Renault dealership for a test drive wasn’t too difficult. A nearby dealer had one that I could drive, so I met with the salesman on a Saturday morning. Before going for a drive, I got a brief introduction on the car. 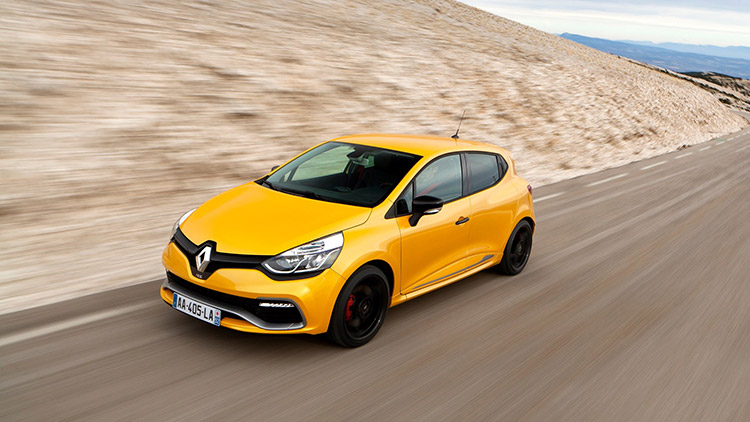 If you compare the RS version with the regular Renault Clio, the outside differences are only subtle. It uses the same bodywork, so it doesn’t have wider wheel arches like its predecessor. It does have a wider stance due to the big black painted 18-inch alloy wheels. The front bumper is different from the standard Clio version and has a special shaped splitter installed which is purely aesthetic, and made as a reference to Renault’s rich history in Formula 1.

An RS badge is also visible on the front. The rear bumper has a very aggressive looking diffuser with two big exhaust tips poking out the back. A nice and clean looking roof spoiler finishes off the rear of the car. In the event of passing this car on the road, a trained eye is needed to see the difference between a regular Clio and the Clio by Renault Sport. Although the RS version — except for black, grey and white – comes in a couple of exclusive colours like bright yellow and red metallic, my mom (for example) would never see the difference. But of course, she has no interest whatsoever when it comes to driver’s cars. 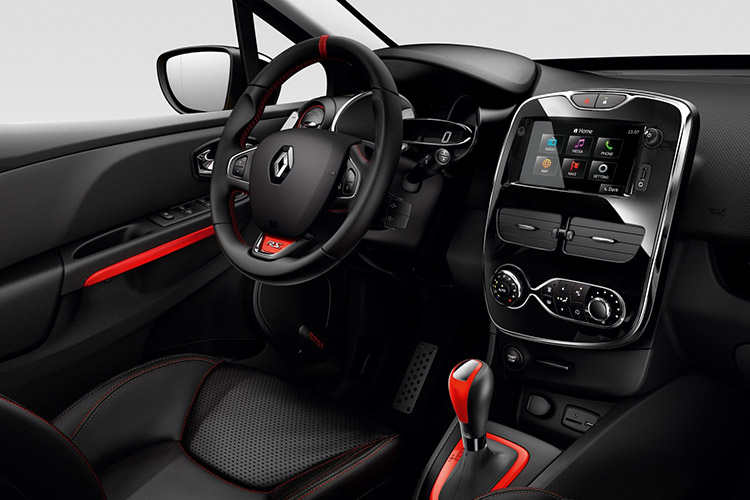 One thing that immediately became clear, is that this car is a lot more technologically advanced compared to the Abarth that I tested a few weeks prior. Not that this is very important to me, as looking for driving pleasure was my main quest, but the difference was there.

One of the features is the RS button, with which you can switch the car’s behavior into Sport Mode. With the button pressed, you get instantly better throttle response and heavier steering. Also the shifting times are set a bit shorter. Apart from the Sport Mode, there is also Race Mode, which switches off all electronic aids. This mode can be useful to get faster lap times during a track day for example, but of course not so much on a public road (smiles).

Talking about track days, you can go for the optional RS Monitor software which can be installed onto the infotainment system, with its 7-inch monitor on the dashboard. The RS monitor can be used as a stopwatch, it can calculate and save lap times on race tracks. It can show lateral G-forces, torque, turbo pressure,… All this data can be very useful if you’re planning on an occasional track day in the weekends. I’m very careful with all my cars and wouldn’t ever risk crashing it on a track, but I know a lot of people would.

After 15 minutes of going through all the car’s features with the salesman, we went for a drive on some nearby winding roads with little traffic. The car I was driving had the optional Cup Chassis which translates in a stiffer chassis, and a stiffer and slightly lowered ride height compared to the non-Cup Chassis version of the RS. This option costs around €700 and is a MUST have when buying this car. Almost no cars of this type are sold without it — it’s THAT important.

After a couple of minutes on the road, I decided to try out the RS button. The difference in driving feel between the regular mode and the RS Sport mode was phenomenal. In Sport Mode, it felt a lot more alive and aggressive. Also the sound note changed to a more serious sounding burble and with occasional pops.

I had put the transmission in auto mode, so that I could focus on the several fast paced turns up ahead and could barely feel any body roll at all. Also not too much understeer thanks to the electronically controlled differential. The automatic upshifts were super fast, I started smiling. After I got used to the car a bit, the salesman asked me if I wanted to try out the launch control… Yes, this little car is equipped with launch control! I nodded and he explained me how to use it. We tried it out several times over the next minutes when the road was clear of any traffic. It felt awesome. I was really enjoying myself.

Up until now, I had only been driving in auto mode. Then I decided to change to manual shift mode. That’s where things started to go downhill. Apparently, when in auto mode, the computer calculates the best possible moment to shift to the next gear. It must be said, it does a splendid and flawless job. But in manual mode, it’s a human being shifting on moments that are sometimes less ideal compared to what the computer thinks (although you get notified on screen and with a beep tone, if you wish). So the computer needs to re-calculate your input which apparently results in a shifting times that are at least 5 times slower than in auto mode — at least that’s what it feels like.

In one situation, I pulled the upshift paddle on the right side of the steering wheel and I quickly pulled it again because I thought I hadn’t pulled hard enough. The salesman told me that you had to wait for a moment sometimes… I couldn’t believe what I was hearing! The manual shifting can’t be that slow?! He quickly told me that you would probably never use the manual mode anyway, as the auto mode was so convenient. Or, I could order the Clio IV RS 220 “Trophy” top version with an additional 20 horsepower and some tweaks here and there. On this version, small issues like the so-called “lazy shifts” (Google it!) have been solved. With a new-price of beyond €25,000 in Belgium for a well spec’ed car, that’s almost €3,000 more expensive than the regular Clio IV RS 200 EDC.

“No,” I thought to myself, “that’s not right.” I’m not buying a more expensive version because they didn’t nail it the first time, on the regular RS. My dreams of driving this car as my next daily were shattered instantly. That’s also when I realized how important the involvement of being able to manually change gears is for me. I still think this is an amazing looking car, and you can have a lot of fun in it as a daily, but unfortunately the gearbox is what ruined it for me…

One more to go

In next week’s story, I go and check out my last hope on owning a pocket rocket, the Ford Fiesta ST. Only on RallyWays.