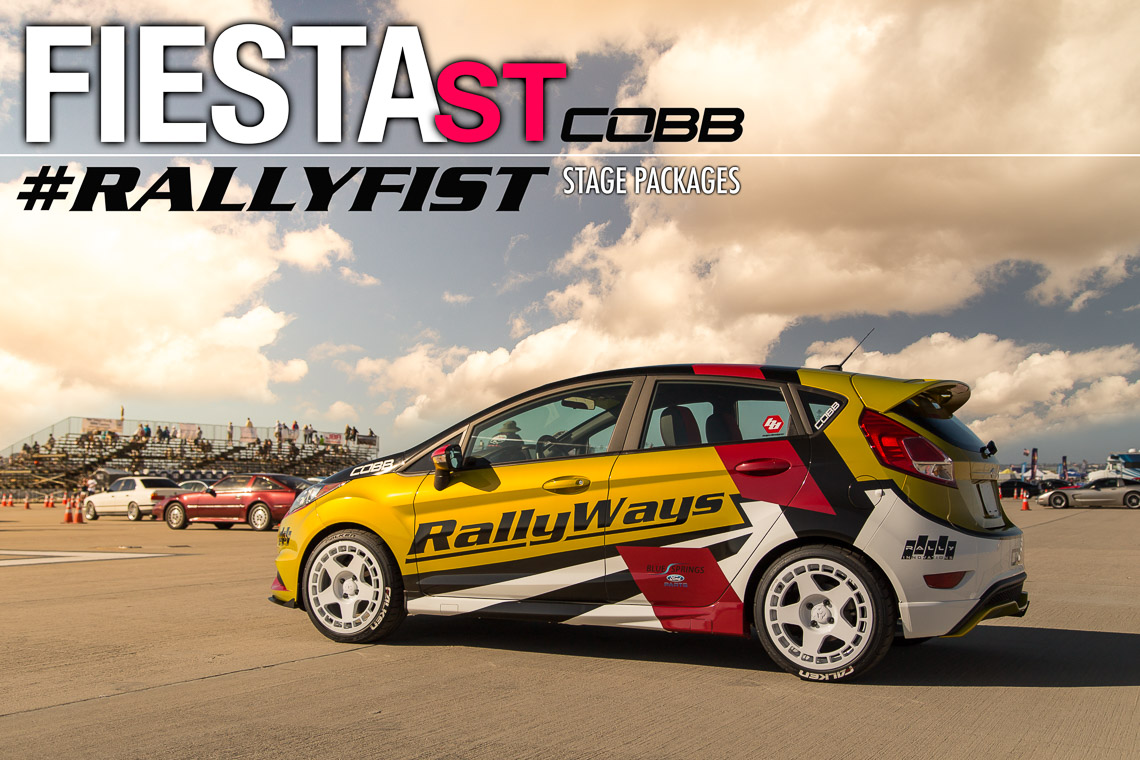 We’re looking at the Cobb Tuning Fiesta ST Stage Power Packages. See how great it is to be able to mod your Fiesta ST in predetermined stages with a suitable tune to go with each stage.

There is a beauty in being able to mod you car in stages. Not only does this give you the opportunity to take your time and stick to a budget, but you can test your gains at every stage. The best part is that you can stop at any stage if you wish. Think you found what you were looking for at stage 2? Nice, stay there. Want even more power? Move on to stage 3.

When planning the mods for the RallyWays Ford Fiesta ST aka #RallyFist, I immediately chose COBB Tuning for the parts and the tunes. See, there are many aftermarket suppliers for the Fiesta ST, but I really liked COBB’s offerings. COBB Tuning’s Fiesta ST packages, I felt were very complete and cohesive. Also, I was looking for a finished product that would allow for a very daily drivable car. I didn’t want some over-the-top build that would be too much of a pain to maintain. Balance is key.

I had no intention of swapping turbos at any point. Also, I was looking for a very safe, yet powerful tune, I felt that COBB’s off-the-shelf (OTS) tunes would do the trick.

Let’s look at the basics… 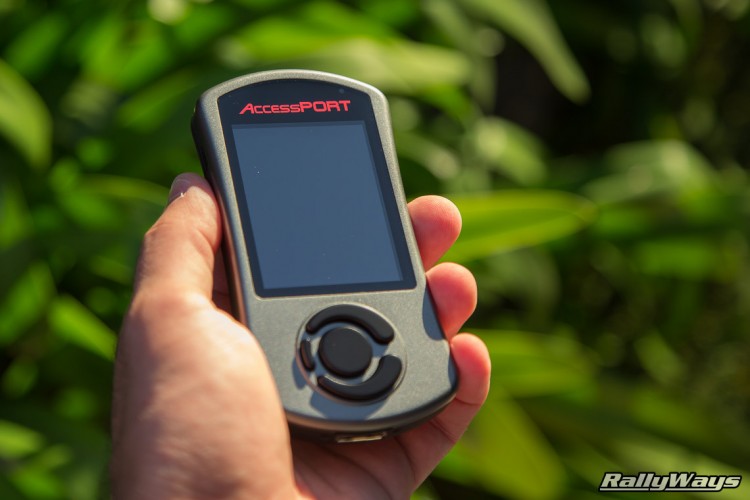 The first thing I did was the logical choice, getting the COBB Accessport V3.

The COBB Accessport V3 would of course be the central part of modding the RallyWays Fiesta ST. I wanted to make sure I saved the stock tune, which the Accessport can do right before your initial flash. Secondly, although my plan was to go full stage 3 from the get-go, I wanted to at least run the car at stage 1 for a week or two before moving along. This would give me a pretty good idea of the differences and gains to be expected.

Keep in mind that when you buy COBB Tuning Fiesta ST stage packages, some products overlap. You don’t actually buy the Stage 1 Power Package, then a month later turn around and buy the Stage 2 Power Package and so on. No, what you do is you actually choose a package, and if you want to later move on to a higher package, you simply pick and choose the parts you are missing from the next package up.

The most important bit however is to complete the package that matches the tune. To give you an example, the COBB Fiesta ST Catted Downpipe is my favorite mod to the car so far. However, the COBB Downpipe is a Stage 3 mod. You can’t just go and slap it on and go for a drive. This mod really needs to go along with the COBB Intercooler and to a slightly lesser degree, the COBB Intake. If not, the extra flow of the downpipe will cause heat management issues. You need that intercooler and stage 3 tune to keep that heat in check. The Stage 3 tune is written to also work with the intake, so keep that in mind.

You know, there might be some flexibility in the tunes… for example, referring to the COBB Fiesta ST Downpipe, I know it will only work well if paired with the intercooler, but it might also work OK with just a panel filter and not the full intake… but why risk it?

The point is, the reason COBB Tuning’s stage package offerings work so well is because each stage has been tested and tuned accordingly. I really see no reason to try and get away with incomplete packages or mixing and matching unless you are going to get a custom tune. The only reason I can see for incomplete packages is a limited budget. In which case I would highly recommend a package that’s one level lower or just saving enough money until you can complete the package you want. For those mixing and matching parts planning on getting a custom tune, that’s a whole other story. A case like this would not be due to budget since the custom tune will likely cost you well over $600 anyway.

The COBB Fiesta ST Intake and the Cat-Back Exhaust are probably the most flexible of the parts when it comes to what stage you apply them at. I say this for two reasons…

1. Because I actually installed the COBB Fiesta ST Catback Exhaust early, while still at Stage 1.
2. Because for many, cold air intake and catback exhaust are often the first mods done. 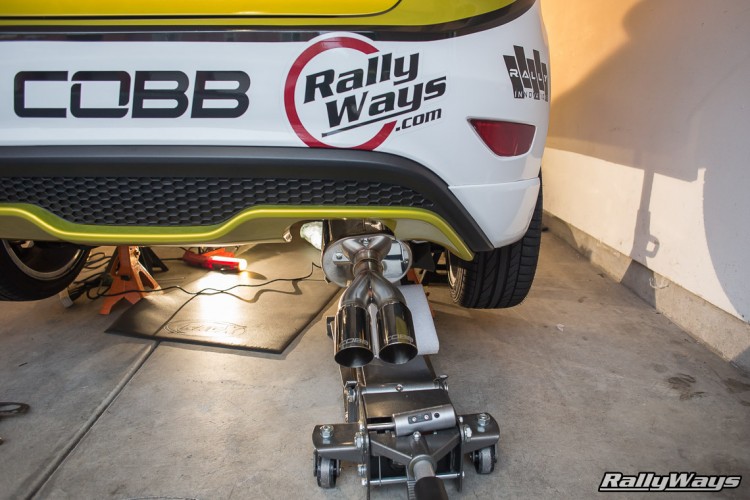 Intake and catback exhaust are generally very easy mods to install yourself. That’s one reason why they are so popular. Additionally, while the gains are minimal, the butt dyno really likes those mods because they make the car sound louder making you feel like you’re going faster.

Simple intake and exhaust mods oftentimes don’t require tuning. Ah, but here’s the catch! Gains are very minimal without a tune. You’ll get maybe 5WHP from the intake and catback. However, I grew up in a time where stage packages didn’t exist and slapping on an intake and louder muffler was the order of the day.

Interestingly, COBB offers the Catback Exhaust as part of their Stage 3 Power Package and not in any of the other two. Here’s why I suspect this is…

You get more bang for your buck when sticking with the predetermined stages.

Yes, I might have grown up around cars in the era of intakes and exhausts, but take a look at this:

The COBB Tuning Fiesta ST catback exhaust alone costs $745. The COBB Intake costs $325. That’s $1070 worth of car parts. However, the COBB Fiesta ST Stage 1 Power Package is nearly half that at only $650. And guess what? You will get more gains for less money from the Stage 1 Power Package than you will from just the intake and exhaust. True, you won’t be louder, but you will be faster… and that’s what matters.

See, these days, specially with turbo cars, engine management matters so much more than just bolt-on parts. It’s obvious that COBB puts the exhaust in the very last stage package after you have exhausted the other less expensive, but highly effective, options of improving power and throttle response. By then, it’s just another drop in the bucket anyway and spending the extra cash to complete stage 3 is of course the way to go. Not to mention, that sweet downpipe.

The Fiesta ST gets louder and more powerful as you move along in the stage mods, but it’s that downpipe that really opens it up. Pops, crackles and burbles out of the exhaust are only possibly with the downpipe. But, you have to work your way up to Stage 3.

For reference, these are the components in each of the COBB Tuning Ford Fiesta ST Stage Power Packages: 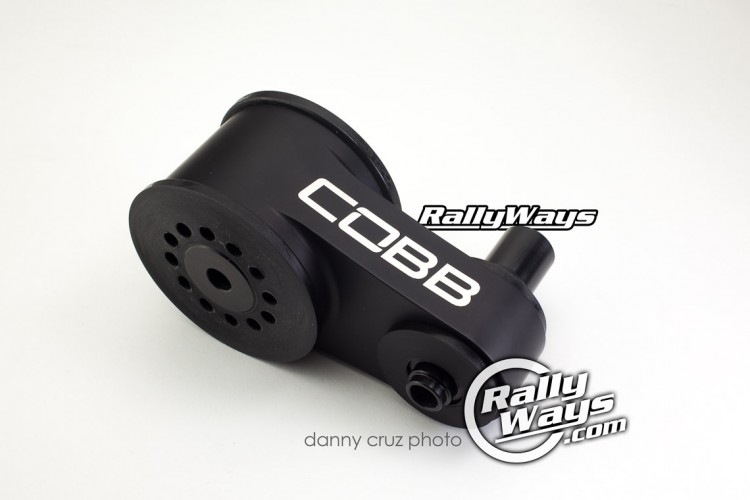 There is one last bit I haven’t talked about. It’s the COBB Rear Motor Mount.

This part is not one that will be affected by the tuning, or any of the engine power mods for that matter. However, it’s so good that it’s one that’s worth doing even if you won’t be doing anything else. In fact, Ford should probably sell the car with COBB’s Rear Motor Mount inside the glove compartment for you to install the minute you get home.

The rear motor mount helps hold the engine tighter in place. It eliminates the problem of the engine ramming into the firewall during hard launches and also reduces wheel hop when you lose traction under power. Instead of the wheel hoping around as it tries to get traction, you get solid chirp and spin before the tires hook back up. I was pleasantly surprised by the fact, the first time I tried to pass a row of cars from a dead stop. I put down more power than I expected and spun the front tires, but I didn’t get that awful hoppy-vibe I would get before the rear motor mount mod. The stock motor mount is just way too soft and designed just for comfort. The 2014-2016 Fiesta ST, given the little beast it is, needs something more for performance than comfort.

It really works and it’s a beautiful piece of machining too. The more power you gain, the more the part’s need becomes evident, but even a stock Fiesta ST can benefit from COBB’s rear motor mount. 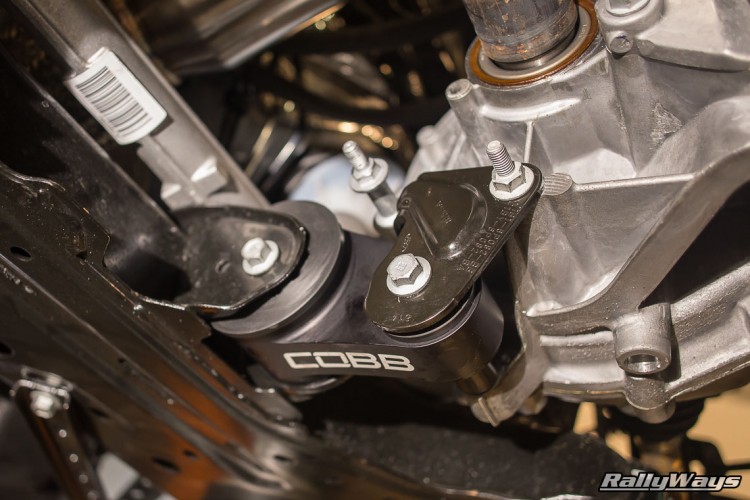 The rear motor mount installation is super easy and quick. Plus, I installed mine when the car was nearly stock. Some people hear the word “motor mount” and they immediately get scared and think they have to lift the engine or something in order to install the mount. That couldn’t be further from the truth. Even when you remove the stock mount, the engine doesn’t move an inch. This part is meant to work with the engine under load. It’s not there to keep the engine from falling out.

The rear motor mount adds a little bit of vibration to the drivetrain but it’s barely noticeable. The COBB rear motor mount should have been painted gold at the very least — to remind you that it’s really worth its weight in gold. I love it.

That’s pretty much it! I suggest that before you buy anything you make a plan of what your goals are with the car. Decide if you plan on going all the way up to stage 3 or not. Even if you do, but your budget is limited, you can always start at stage 1 or stage 2 and move on to stage 3 later on. The only thing holding you back after the budget, would be time. Yes, it’s quicker to install it all at once. But even if you have to space the build apart a few months, that’s fine too. 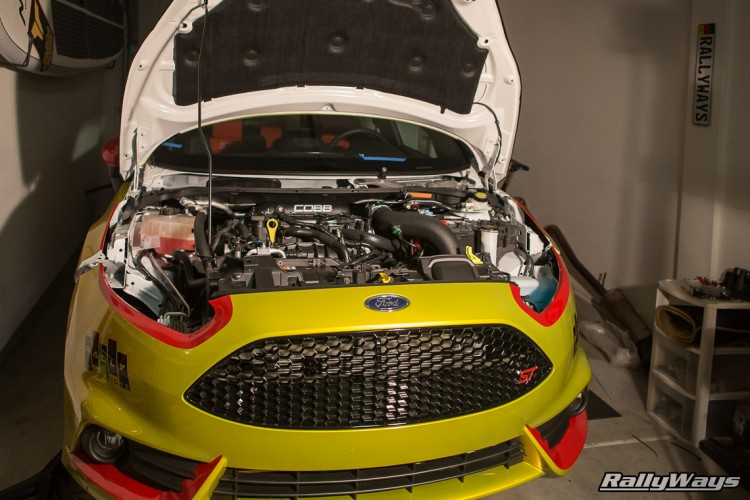 In total, it took me around 20 hours of work to install all of the COBB Tuning Fiesta ST Stage 3 Power Package parts. It takes me this long because I take my time and because I document everything for RallyWays. If you do it in stages, it will take somewhat longer because you have to take a few access parts apart at every stage (such as the plastic cowl at the back of the engine bay). However, if budget’s an issue, this might still be the way to go. The upside is you get to test the car and feel the gains at every stage. That’s always fun!