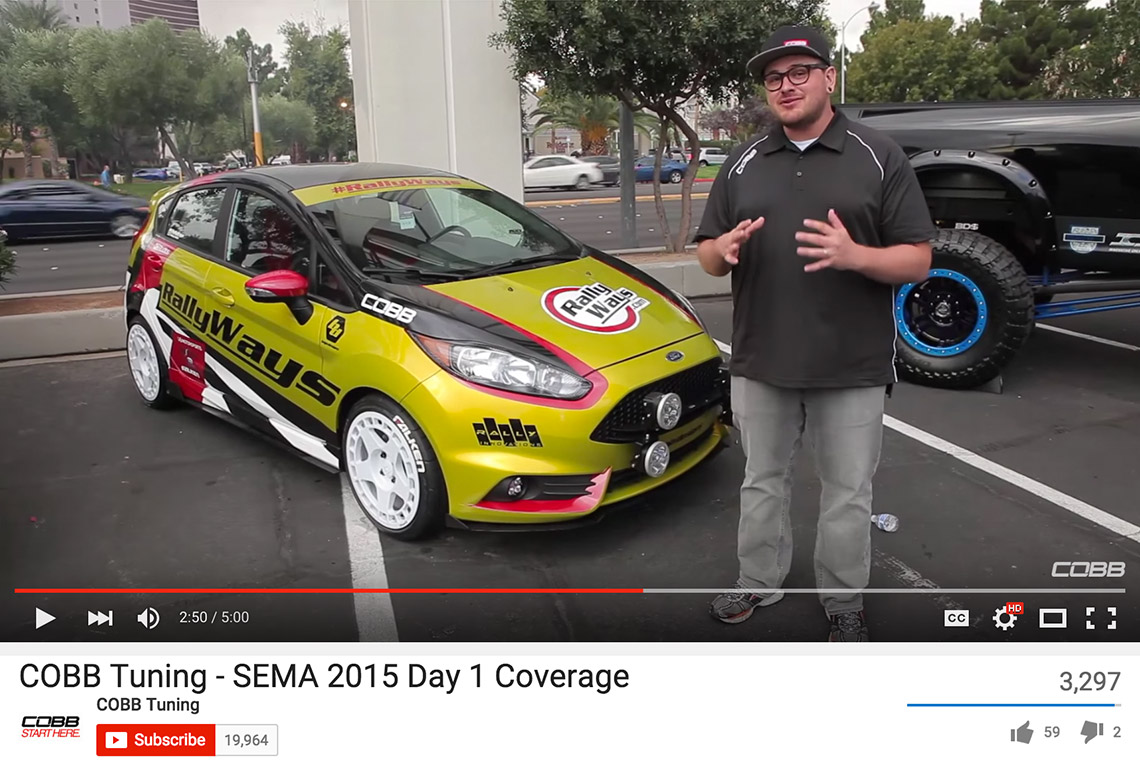 For me, the start of SEMA 2015 didn’t go all that smoothly. It looks like I wasn’t the only one that had a few issues getting to the show, let alone sorting out all the logistics.

You probably went a little crazy frantically clicking on the play button of the screen crab image I used for the cover photo above. Sorry, not sorry. Lol. I’ll sit here and giggle a bit while you scroll down a little ways for the actual embedded video.

In this video coverage of SEMA 2015 Day 1 by Cody at COBB Tuning, he starts off by pointing out the ordeal it was for him to get there. Cody and I had an appointment to meet up for an interview to put together the #RallyFist Ford Fiesta ST section of the video. As luck would have it, neither of us would be able to be there in time to meet up.

Thankfully, Cody made the best out of an imperfect situation and carried on creating the video without me. Luckily we had an email conversation just the week before where we had talked enough about the car to where he had enough information for the feature.

The video starts with a feature of the COBB Tuning Ford Focus ST build at the Ford booth. Then it moves on to a feature about an old 1962 Ford Econoline pickup truck with 4 massive supercharged engines, at the Amsoil booth. Then, at 2:40 Cody moves on to the #RallyFist feature. The video ends with a ride in the new Ford Focus RS.

I of course want to take this opportunity to thank Cody, Marshall, Ian and the rest of the COBB Tuning team for this feature and for the amazing support in developing the RallyWays Fiesta ST.

As Cody says in the video, #RallyFist does in fact have a full COBB Stage 3 package for Fiesta ST. This is the 3rd and final package in the COBB Tuning Fiesta ST Stage Packages. You can’t tell in the video because of the overcast lighting, but the wrap is metallic. The yellow is 3M 1080-G335 Lemon Sting Metallic. It’s awesome because while it’s yellow, it takes on some greenish hues in some lighting situations.

The wrap design, or RallyWays Livery as I like to call it, is in fact the 10th iteration of the design. It was developed almost wholly on my laptop, on a tiny marble table while sipping on multiple Peet’s Coffee double lattes. Trust me, many. Big shoutout to my buddy Kyle at KI Studios for the installation work and for cutting out all the decals.

Apart from the COBB Tuning Fiesta ST Stage 3, #RallyFist has aero parts like the front splitter and side splitters by Rally Innovations. Rally Innovations also provided the light bar to mount the awesome Baja Designs XL Sport LED offroad lights. Less noticeable, but just as important, the stock pocket Fiesta fog lights were removed and in place were installed a pair of Baja Designs Squadron Pro LED lights with a powerful output of 4,300 lumens.

I absolutely love those Squadron Pro lights. They make one heck of a difference just driving on dark roads in the mountains. They also proved very helpful driving to and from Vegas, since the trips there were done in the wee hours of the night. Rally Innovations works with Baja Designs for fitment for both the Fiesta ST and Focus ST, as RalIy Innovations makes a plug and play kit to swap the stock fog lights for the Squadron Pros.

As Cody mentioned in the video, the wheels are Fifteen52 Turbomac. They are wrapped in sticky road and track rubber by Falken Tires. The tires are RT615K. Read more about the Falken RT615K tires. The tire stickers are by none other than TireStickers, of course!

I’ll admit I wasn’t too stoked with the location of my car at SEMA. I knew it was going to be outside and I was actually pretty happy about it. Many of the outside sections of the show are really, really busy. The problem was that #RallyFist was off to the back, near the Lucas Oil trailer. To me, it was not prime location.

To make matters more “interesting,” for lack of a better word, it rained hard (and I mean HARD) during part of the show. It even hailed. Luckily, small hail. All this didn’t help keep the car clean. I managed to get the car cleaned up. But, you can tell a bit in the video, when looking at the side skirts, that rain had taken a beating to it.

This all said, it all turned out pretty well. Foot traffic was quite good and she got a lot of attention. Since the car was in the featured lot, it was available to be seen by the general public and not just the registered industry show attendees. This is a big plus if you ask me.

On Friday, I gave the car another thorough cleanup. At shows you can’t pull out a hose and a bucket. This is when my waterless washing tips come in handy. I cleaned her, dropped a layer of spray Meguiar’s Ultimate Quik Wax and got ready to drive her on the SEMA Cruise to SEMA Ignited. For all the coverage of that event, check out the SEMA Ignited photos.

As I’m pulling into the SEMA Ignited venue, there is a huge crowd on either side of the SEMA Cruise caravan. My windows are down.

These guys in the crowd call out and ask me, “Hey, where is that Blue Springs Ford Parts you have there on your car?” I’m like, “They are in Missouri.” Keep in mind that we are in Vegas and me and my car are based in SoCal. Upon me saying this to them, their faces all lit up! All excited they said, “That’s where we are from! No wonder it seemed familiar!”

Who would’ve thought? It’s not that surprising, as SEMA brings people from all over. But still, having folks from Missouri find my car and then recognize the Blue Springs Ford Parts logos and strike up a conversation about it was pretty cool.

Again, big thanks to Cody and COBB Tuning for the feature. This is just the beginning. Many more exciting things coming for #RallyFist.

One final note, I mention some of the upgrades and mods on the RallyWays Fiesta ST in this story. However, for the complete list of mods and parts used in the build, check out the #RallyFist Parts List article. Then, take to Instagram, Facebook and Twitter and look up the #RallyFist tag for all the content on social media about our Ford Fiesta ST.