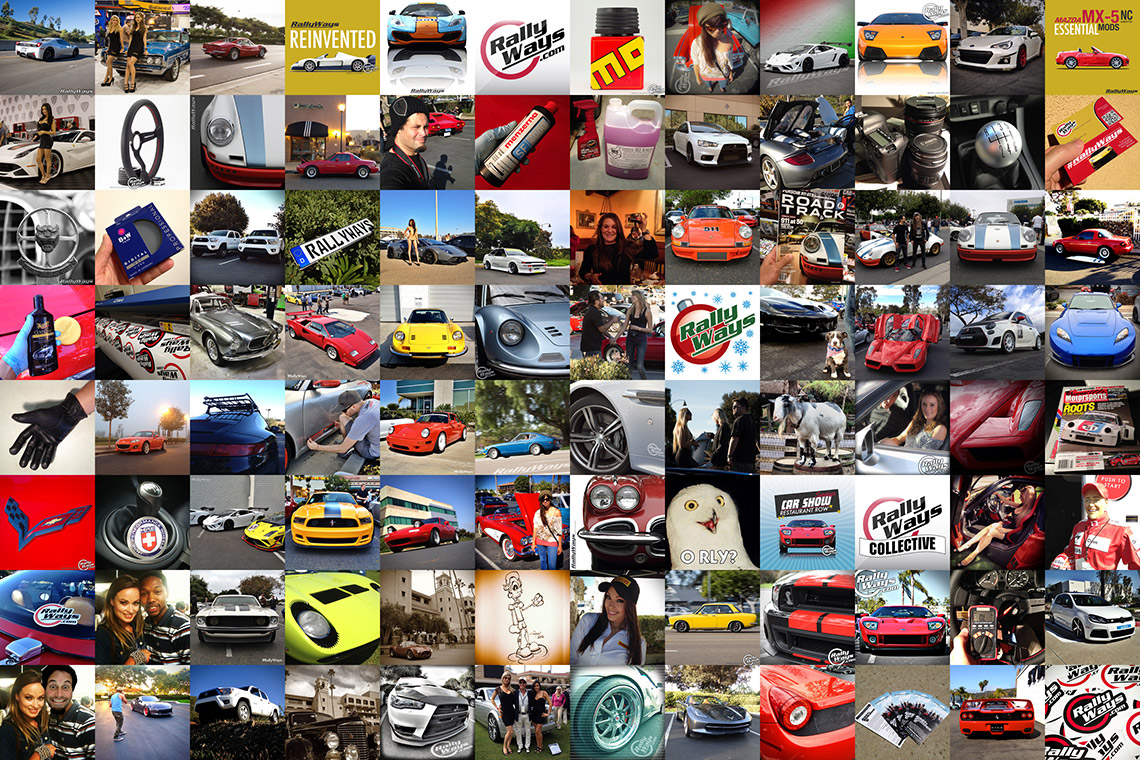 Social media is a big deal is pretty much every industry. No surprise then that it’s hugely important in the car industry. There’s a reason why nearly every company in the car enthusiast world has a Facebook page and every day a kid starts a brand new Instagram car page. Let’s look at what we consider to be the best social media sites for cars and why.

To make this simple and easily digestible, we’ll make a list, leaving the best to last.

Why we love it. Facebook of course is extremely popular. The network is huge and the possibilities are endless. Every major player in the car industry has a facebook page. This all means the expanse covered by Facebook in the car world is pretty darn big making it key for car-industry branding.

While the network is vast, you can’t just post to your heart’s content and expect fans to see your posts. Additionally, photos uploaded to Facebook are compressed heavily. While many car photographers, tuning shops and custom car builders promote their work on Facebook using photography, this is also the network where your photos look the worse. Now, don’t get me wrong, we’re not saying Facebook is bad – we use it all the time and it’s an important tool for us. Plus, if you are to have authority on the web, you also need a strong Facebook page. What we are saying is that you have to strategize carefully to promote your car industry content on Facebook. For these reasons it’s at the bottom on our list of favorites. Still a favorite though.

Downsides: Wait, what? We already mentioned the downsides. Haha. Sorry about that. Let’s carry on.

Why we love it. Twitter’s awesome. We love Twitter. I personally have been using Twitter since it first started. I have met some of my best connections, who are now also good friends, on Twitter. At a collective level, for RallyWays, the ease of publishing and the fact that it doesn’t take up a lot of time is one of our favorite things about Twitter. You can go there once a day, post a few things and read a few posts from people you follow and it really doesn’t take that much time. Sometimes you post a link to a new article and you’ll get good traffic from a few retweets. However, in the car enthusiast industry, we still don’t consider Twitter to be our favorite social network.

Downsides: The car industry relies heavily on images. We thrive on great car photos and we like to look at many of them. Feeding out photos via Twitter can be done effectively, but given that most of the time a link needs to be clicked to view them, it gets old pretty quickly. We love Twitter and we use it all the time – even more than Facebook sometimes. But we still have other favorites.

Why we love it. Ah Flickr! Some love it some hate it. We love Flickr because RallyWays depends on high-end car photography for its existence. And Flickr is strictly photography. We love how our target audience on Flickr is focused exclusively on photos and nothing else. This makes our participation on Flickr very easy. We post great automotive photos, we tag them adequately and then we promote them. Simple. We follow people who’s photos we like and people follow us and look at our photos.

Flickr is the only social network we use to load actual content directly to our site. At RallyWays we still prefer to host everything ourselves, but we’ll sometimes use Flickr to feed a car show photo gallery or two to our website. A great example is our car event pages. Almost all the posts there host a gallery at the bottom of the page. Those galleries are fed by Flickr. Another cool thing about Flickr is that unlike Facebook, they don’t compress your photos. So the photos you upload look as good displayed as they did on your computer locally. Plus, if you ever want to download them, you know you’re getting uncompressed photos back.

Downsides: However, there are some problems. Like freedom, Flickr isn’t free. You have a finite number of images you can upload. After that, if you want to keep going, you have to pay for a premium account. But unlike Facebook, Flickr is actually affordable. The cost of the premium membership is very reasonable and the features well worth it. Another downside is that compared to Facebook and Twitter, the audience is much smaller. Engagement is much smaller as well.

Why we love it. We could barely wait! We’re at our very favorites now. Of all these car-friendly social networks, Instagram is easily the most addictive. That’s a good thing though. It’s highly addictive to you, but that means it’s also highly addictive to your fans and customers. We don’t have to tell you how good Instagram is for cars – You probably already follow the greats like Carswithoutlimits, AmazingCars247 and Autokings and of course, RallyWays. It’s the ease of use and high engagement that we love.

The lack of private messaging and lack of extra features other than liking, commenting and tagging photos and videos helps keep IG focused. And yes, it’s a time-suck. But it’s a time-suck because of the sheer number of photos we sometimes post and the huge amount of engagement we get. But in reality, posting a single photo is quick and easy. We love posting many of our favorite car photos to Instagram. We don’t just save them all for our website. We also love that we can post easily, right from the field, without having to worry too much about perfection like we do with our site. Plus, to feed our perfectionist side, we also process some of our professional car pictures and load them up to the iPhone for posting. This gives us the ability to balance phone-camera-quality photos with a number of professional DSLR camera photos.

Since we use the @RallyWays IG account for sharing 100% original photos, we recently started the @RallyWaysCollective Instagram page to share our friend’s photos. We wanted to have a place to shoutout RallyWays’ supporters and it has been very well received.

Downsides: Well, there aren’t many really. Instagram does what is says on the tin and it does it well. The only downside we can think of is the lack of linking feature and the low quantity of features. However, those things are also what make the Instagram formula work.

Why we love it. “Wait what? Google Plus is your favorite social media network for cars?” We know what you’re thinking… “Who the heck uses Google Plus?” Well, apparently, many people use it. As of this writing, the RallyWays Google+ page has over +23,000 “plusses”, which are basically up-votes. By the time you read this we’ll likely have much, much more than that. Also, at the time of this writing, we have a little over 15,000 followers on Google Plus, otherwise said, “15,000 have us in their circles.” If you think about it, that’s huge when you consider how much bigger Facebook is.

Google+ is great for international exposure. Facebook seems to work better for us locally. Most of the RallyWays followers on Google Plus are car guys from abroad. It also seems like the audience on Google+ is very different than the audience on Facebook. For this reason, it doesn’t ever become redundant having pages on both networks. Plus, we love having great rankings on Google search. We don’t know if having a strong presence on Google+ helps with that, but it certainly is a possibility. Google makes us happy and we give back a little by supporting their great social network.

There are many other great features why Google+ is our favorite social media site for cars. Google+ doesn’t compress our car photos. They look great, just as they were when we uploaded them. On G+ there is a considerable number communities for car enthusiasts with thousands upon thousands of active users. And did we say that our photos are not compressed? Yes, our car photos look much better on G+ than they do on Facebook.

Downsides: Well, there’s the obvious – Google Plus is not as widely used as Facebook. For this reason, you can’t just totally ditch Facebook. This means you kinda have to run both networks, which equates to more things to do. But in the end, the audience is different and it’s really worth it.

So that’s about it, those are our top 5 best social media sites for cars.

We haven’t forgotten YouTube. YouTube is as important as any of the networks we mentioned above. However, it requires a whole other time-consuming approach that the more leisurely networks do not require. So we’ll keep it on the back-burner as more of a video service than just a social network. The fact is, YouTube can make or break a brand. So it must not be ignored.

And yes, we know, there are more social networks that are great for car related promotions. Pinterest, Tumblr, Vimeo, Vine, etc. But let’s stick with our top 5 for now. By the way, we like Pinterest quite a bit. For automotive, social media sites like Pinterest are a bit of a secret weapon. We were tempted to put it above Facebook, but decided against it because we’re still not getting as much traffic from it as we get from FB.

There’s no question social media is an intricate part of any plan to promote a car-related brand. Like RallyWays you might be promoting a service or product in the car industry. You may find some social networks work better for you than others. You don’t necessarily have to adopt our favorites in this order. But hopefully this helps shed some light as to what networks have helped RallyWays succeed and why.