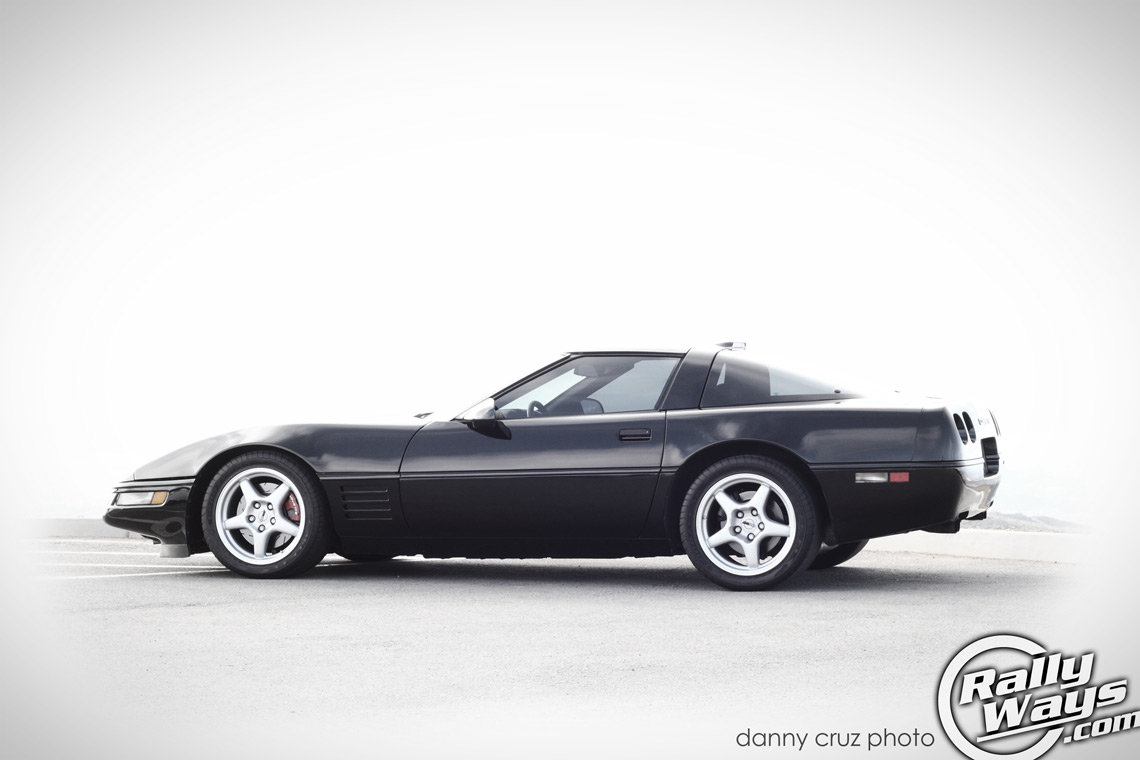 Here we have a 1991 Chevrolet Corvette ZR1. This is a car that originally debuted in 1990, roughly 6 years after the first C4 was released in 1984. The numbers at the time pitted the C4 ZR1 against some super cars of the 90’s.

While the price tag was never close to that of a Europen super car, not then or now, many comparisons have been drawn with those cars through the years. More than one car magazine has at some point pitted the ZR1 against other legends of the time like the Ferrari F40 and the Lamborghini Countach. 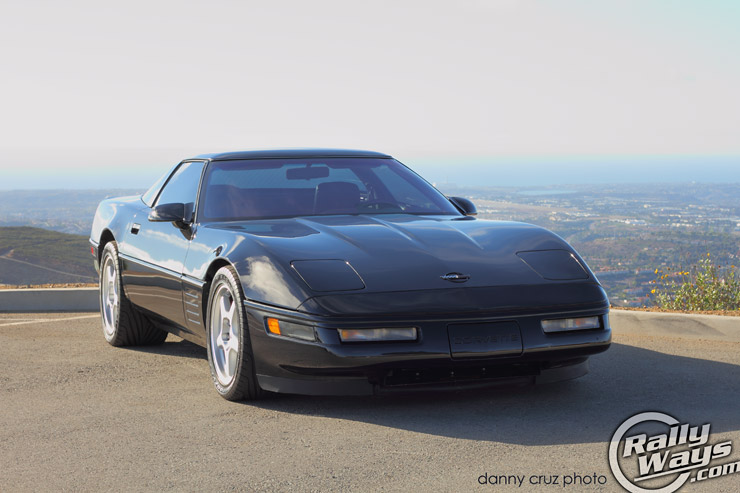 Now, before you start a flaming war claiming you know best, close to 25 years have gone by since the debut of the most powerful Corvette. During that time, many journalists and car people have had plenty of time to compare the ZR1 C4 Corvette to many other fast cars from the time period. Of course, there’s always the fact that at the time, the Corvette was America’s only true production sports car. It’s only natural. Comparisons would have to be made with other titans of the time and this was the only candidate the US could offer up. As the most powerful Corvette ever, of course it was going to be thrown into the deep end with all the other beasts.

I’m not here to write a review of the C4 Corvette ZR1. That is not what this article is for. There are plenty of articles and reviews online and if you want to learn the entire story behind the development of the car and the famous LT5 engine that powers the ZR1, you’re better off ordering the book Heart of the Beast by Anthony Young.

This car. What makes this particular ZR1 Corvette special?

The owner of this 1991 example, Mike, happens to be a car nut that also owns a newer C6 Corvette. There is some nostalgic history that fueled the purchase of the ZR1 starting with the fact that his father used to own a 1991 ZR-1. Adding to the mixture, Mike already owned his C6 when his decided to sell a Mitsubishi Evo X he daily drove at the time. The sale of the Evo left him some leftover cash. A friend challenged to him to buy the most Corvette he could with the money on hand – which wasn’t a whole lot. (Because everybody knows Evos will ruin you in tire and fuel consumption.) 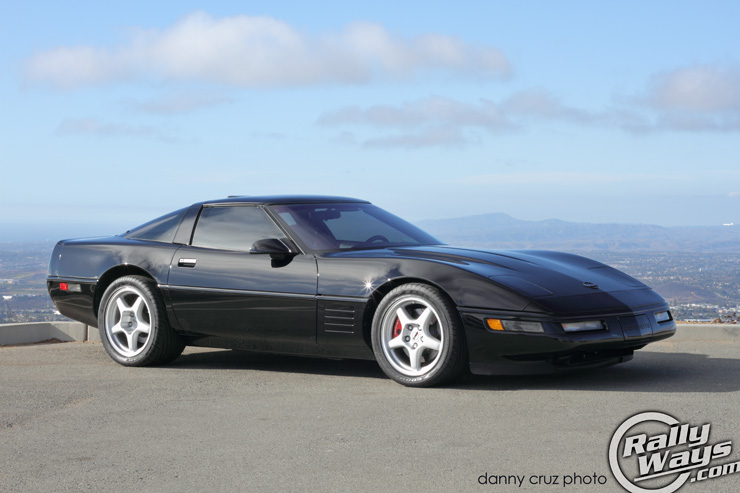 That challenge yielded a 1995 base C4 with 77,000 miles on the clock. This car was not going to be faster than the Evo or better than Mike’s C6 Corvette. But, the car did offer up one very important detail that people often overlook – it was economical. More importantly, it was Mikes re-introduction to C4’s after experiencing his father’s ZR1 years before.

After the C4 was sold a year later, Mike decided he wanted to up the ante and go for the very best C4 – and that’s the ZR1 featured in this article.

There’s an interesting detail that needs to be brought up about Corvettes. Yes, the Corvette is America’s most famous sports car. It’s also pricey by 2-seater, second car standards. But gentlemen, it is not a Ferrari. Yes, a ZR1, back then or even now can give you the thrills of a Ferrari, but GM’s intention with the car was (and still is) to provide the same excitement with a smaller price tag. For that reason, they cost less and depreciate more.

A Ferrari owner is known to lock up his brand new trophy in a hermetically sealed garage only to be driven when the sun is up and the barometer indicates perfect atmospheric pressure. If that particular Ferrari owner just so happened to buy the right model, he might see the car hold its value and in some cases even increase.

However, here’s the problem… I’m sorry, but that is not the case with Corvettes. If you want to see a Corvette that went up in value, you need to look at 1953-1962 C1’s, 1963-1967 C2’s and 1968-1982 C3 Corvettes. Those last ones more so with the ‘68-’72 chrome bumper models. Anything after that, and I’m sorry but they have not appreciated in value. I’ve read plenty of stories about early C4 ZR-1 Corvette buyers shelling out over $100,000 to be the first to get one of these and stick it in a Tupperware box garage – People somehow good enough at making money (or inheriting it) but not so good at investing. This was clearly a car meant to be driven. 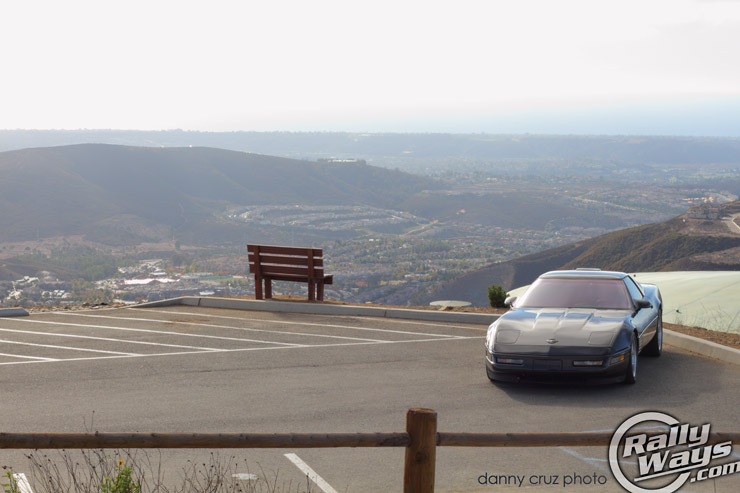 That is a good thing for buyers though, as was the case with Mike’s car here – 20 years old and only 26,900 miles at the time of purchase. However, that didn’t come without a downside. While a low-mileage car can often look better and last longer, there are certain fixes necessary that are many times not present in high-mileage, daily-driven cars. So, on top of the purchase price some money needed to be put in to get the car up to speed. However, work done and the resulting car is one that drives amazingly well and will last a long time. This car is not a daily driver, but it definitely gets driven. And it’s a thrill.

Being much rarer than C6 and C5 Corvettes, Mike much prefers to take this to car shows over his C6. It’s just more unique than C6’s. Plus, the excellent shape the car is in makes it that much more appealing. 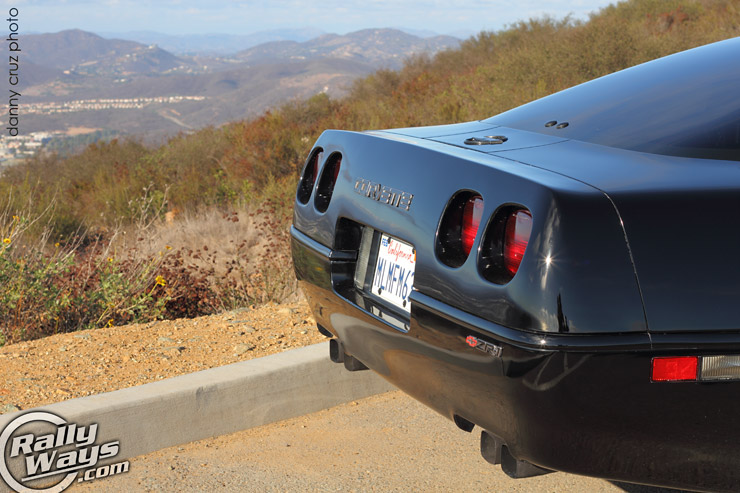 Here’s the deal with this car, it’s a 405 horsepower machine. Yes, a new Mustang GT has 412 horsepower, but we’re talking about a 1991 Corvette. At the time, those numbers were unheard of in production cars that were not European super cars. I drove this car and compared it to the C6 Corvette. The C6, a 2008 has more power and more torque. However, the highlight of the C4 ZR1 is the power delivery. For some reason it just feels gruntier. Of course, the engine is completely different, but I have a feeling the fact that it’s an older car has a lot to do with how it feels. The vintage-feel of the thing, coupled with the massively powerful engine and the noises it makes give it a sense of rawness the C6 does not posses. Plus, even though the C6 is more powerful, the C6 in question is a base car and you always get the sense that you are driving the base car of that year instead of the top-of-the-line machine from the time. At that point, whether the base C6 is faster or more powerful becomes a little irrelevant. 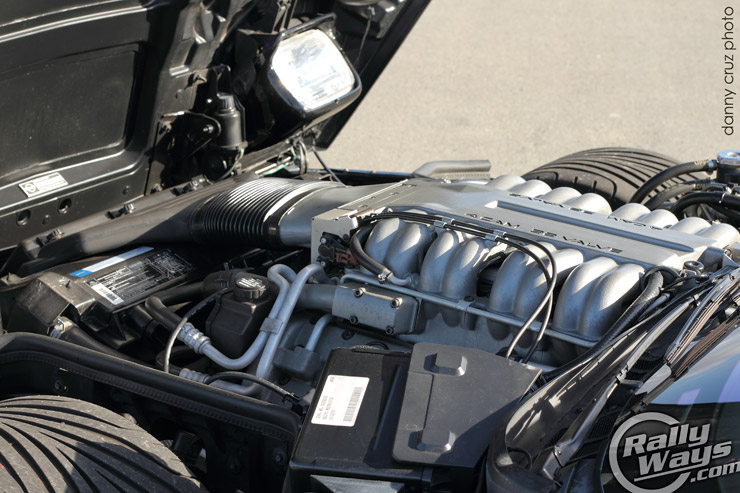 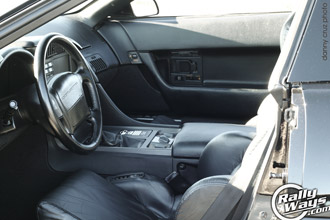 The interior is interesting. It definitely has an 80’s flair to it but with 90’s technology and the air of a top-of-the-line model. My first thought upon sitting inside was that it had more buttons than a space shuttle. In typical Corvette fashion, there is the usual array of interior plastics. The seating position is good and the seats are supportive and comfortable. The seats are also highly adjustable and can fit you if you are skinny, or if you are fat because you can adjust the bolster support. The shifter and clutch feel really beefy, mechanical and direct. Other interior bits that are worth mentioning have to deal with the actual driving functions. The electronically controlled dampers for the suspension are definitely a first in technology for an American car at the time. Then there’s the key operated valet switch which by turning it you effectively cut the power of the car down to 250hp – great for, um, valet parking and teaching your kid to drive of course. 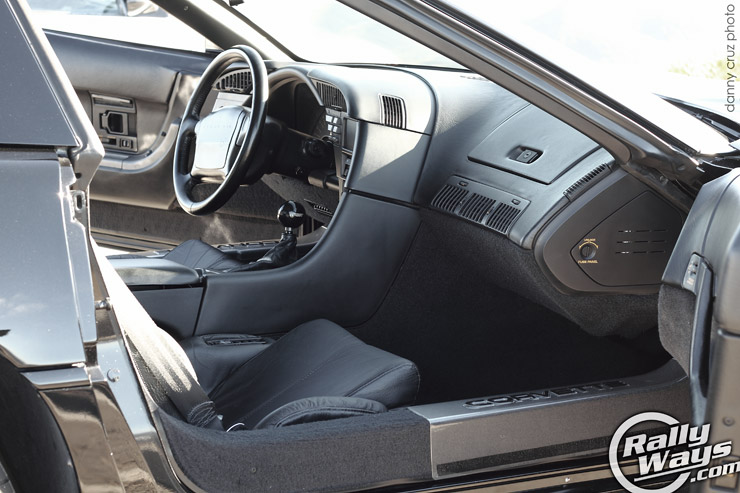 Another interesting feature is the little cutout in the windshield coating, which allowed reduced interference when using a radar detector. Obviously GM knew the owners of these ZR1’s were going to be breaking the law very often – so why not help them out? 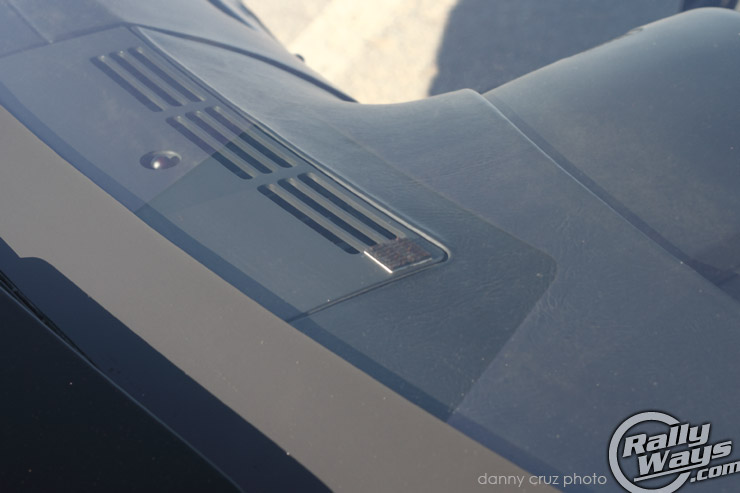 This part is one that after reading the owner’s copy on the subject, I decided I could not say it any better. So, here’s the owner’s own words on that.

After getting involved in tuning and burning my own chips (old fashioned eproms), trying a couple of different cat-back pipe sets, I settled on a stock exhaust system with an x-pipe in place of the factory resonator. Until you go with long-tube headers on the LT5, it seems the amount of power difference running the big loud 3″ pipes is not very large. I did port the plenum and injector housings, which is a big deal for the LT5 as they are starving for air from the factory. If I can do the headers, I expect the gains to be above average as the intake porting is already in place. At this point, I do not want to invest into head or cam porting as the LT5 can get a little bit expensive and I do not want to remove a perfectly good running engine at this point. I also converted to C5 front brakes and use 1995 wheels as they fit this model. C5 calipers and pads are much larger. Brakes are a C4’s weak point.

Some notes by Mike on the development of the ZR1

GM owned Lotus at the time and got their cylinder head technology as well as got them to upsize their 4 -liter V8 into a block that would fit into the current Corvette body. A couple of dozen C4 bodies were sent to England and they put the first engines into those. Once ready for production, they outsourced the work to an outboard marine engine manufacturer, Mercury Marine in Stillwater, OK. A few thousand engines a year was much too small of an order for a GM plant, plus Mercury Marine had a lot of tooling and experience working with aluminum. Many people to this day say they heard the ZR-1 had a boat motor or something like that. It is really more of a Lotus Engine running on GM fuel injection. The car also had a Made in Germany ZF transmission, with Bosch ABS, Australian brakes, on an American chassis and final drive. The sticker price was around $60k in 1991, about on par with C6 ZR1 today adjusted for inflation. A stock ZR-1 is not all that potent compared to many dozens of fast cars on the market today. It’s still considered quick today. Plus, there aren’t many 1990-1991 era supercars worth mentioning outside of maybe the NSX or Ferrari F40. 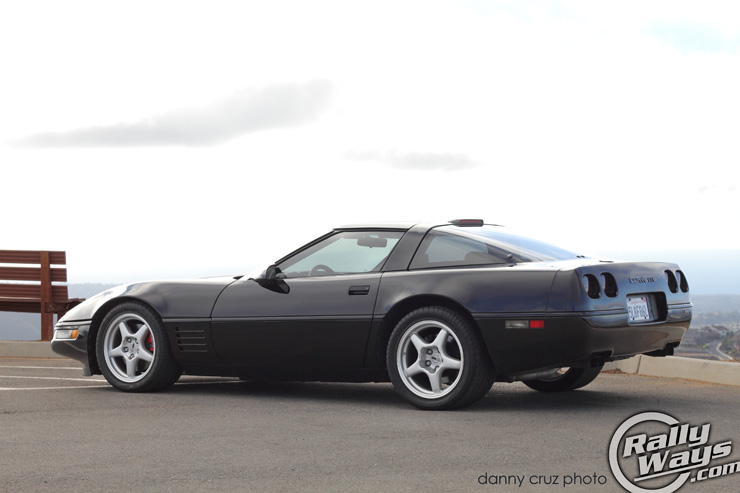 I must add that Mike recently went through a full paint correction process to bring the quality of the black paint to show-quality standards. Many hours were spent with some of the best chemicals and processes around to achieve the quality of depth this black paint shows now. I mean, just look at it!

The original ZR1 Corvette is an amazing car by any standard. What makes it more fascinating is the price tag. These cars were a bargain at the time, as are the current C6 ZR1’s. But more importantly, they are still a bargain today. To get that kind of performance, the vintage looks and style in an icon as is this 1991 ZR1 is truly exceptional. Not to mention the fact that as far as C4 Corvettes are concerned, this is the absolute best. Unless you are interested in a C5 Corvette Z06 (which by the way didn’t get over 400hp until 2003) or a Base C6, for performance, the car to look at is a C4 ZR1. And this black 1991 really shows as one of the very best.