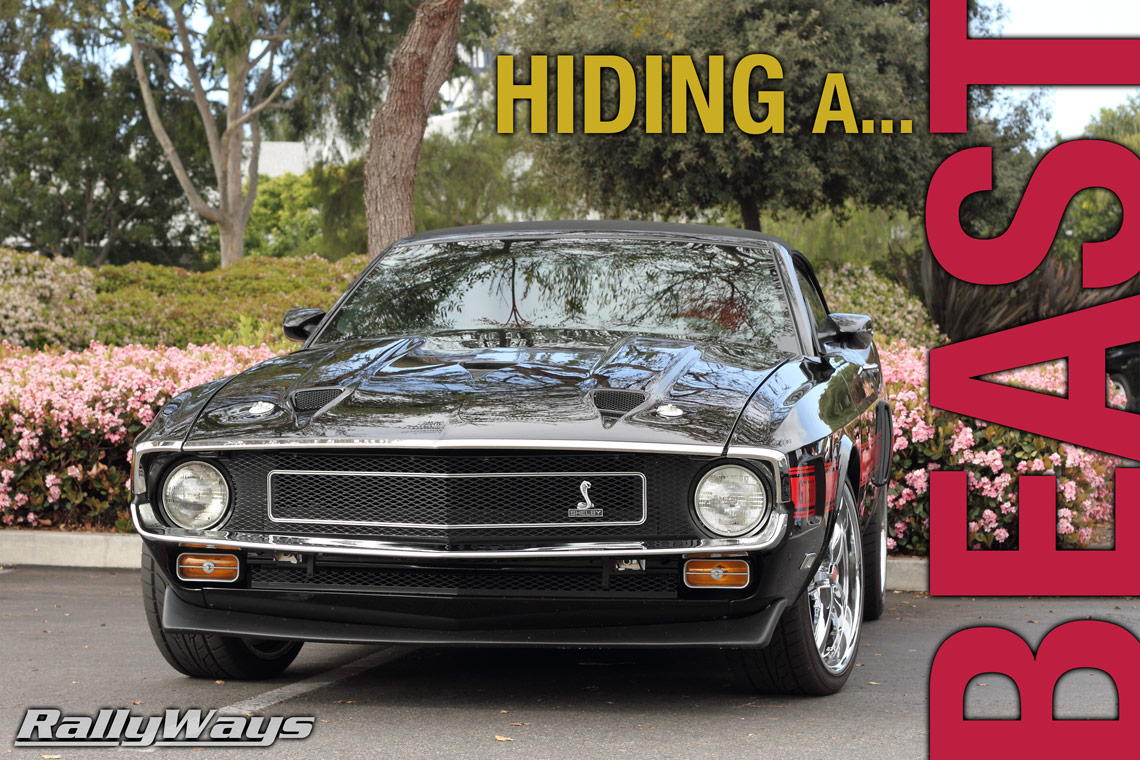 Take a close look and tell me this isn’t the meanest, rarest beast you have ever seen. Keep reading past the photos for the full story.

What’s under the hood is the same 5.8 liter supercharged 2013 Ford Shelby GT500 engine from the production new Shelby GT500. That’s 662 horsepower and 631 lb/ft of torque. And guess what? So is the interior and the chassis – new Shelby. This car is obviously the perfect merger of the newest and hottest technology with the vintage cool looks only a classic Shelby Mustang can possess.

A gentleman by the name of Donald Morton brought it to Cbad Cars. The car arrived a little late, after most people had already left. He came in stealthy and under the radar. But when I saw it I was literally confused. Needless to say, it wasn’t just me. All the car guys around me were also bewildered as to what the car was. The guy pulls up, side windows tinted, convertible is up, not revealing the modern Ford Mustang interior just yet. The massive chrome Shelby wheels look like a twist of the classic Torq Thrusts and they show a hint of big disc brakes – confusing everybody even more.

The owner lifts the hood to a crowd expecting a big block carburated V8. However, the story is much different. I immediately see the blue valve top covers and glance over to the 2011 Shelby GT500 parked nearby. I think, “oh, um, that’s the engine size of that thing over there.” But then, one of the fellow spectators quickly points out, “no, that’s BIGGER.” That’s the 5.8L from the newer 2013 Shelby GT500. And in fact it is – supercharger, CAI and all. That’s when the doors were opened and the true identity of the car revealed.

Full custom then eh?
Yep, this is a full custom car, with the price tag to boot. But not custom in the way some of you are used to hearing. This is not a car built by some flight by night tiny shop. This is a genuine Carroll Shelby Licensed build. It’s the real deal. It’s impressive and stunning inside and out. With the oomph, power and technology of the newest, most powerful 200MPH snake. And it’s a convertible!

The company behind the build is called Retrobuilt. The name suits the outfit perfectly. A close look at Retrobuilt’s website reveals they are currently building 4 different models. The ’69 Shelby GT 500CS Convertible featured here, a Fastback version, a 1969 GT Mustang Fastback and a Prototype 1969 Terlingua Race Car. I see they love 1969. Who doesn’t?

The interior is the familiar contemporary Shelby. However, the owner tells me he re-did the entire thing in red ultra leather. He said he’d never had a black on red car, and now he does. Keep in mind, he’s talking to a guy who’s a huge fan a red interior cars. And I mean huge.

A bit more into the conversation trying to get as much info as possible (keep in mind he’s being hounded by the other guys) and a brochure that talks more about the build is revealed. Another bit that I got out of the conversation is that Autoweek recently wrote an article about the car. It’s here.

A little research shows this car is worth about $100,000. Since it’s a custom job, the prices can vary. Apparently, Retrobuilt will accept any modern Mustang for custom “retro-building.” I reckon Mr. Morton did the right thing by going all out and building upon a 2013 GT500. I mean, if you’re going to do it, might as well do it right – starting with the best possible base. As you probably know, there is nothing higher right now than a 2013 Shelby. All in all, you’re looking at roundabout $60,000+ for the base 2013 GT500 (of course, depending on options and availability) and then investing $40,000 or so on retro building it. Of course, custom… So add or remove a couple of dollars and 10 cents. 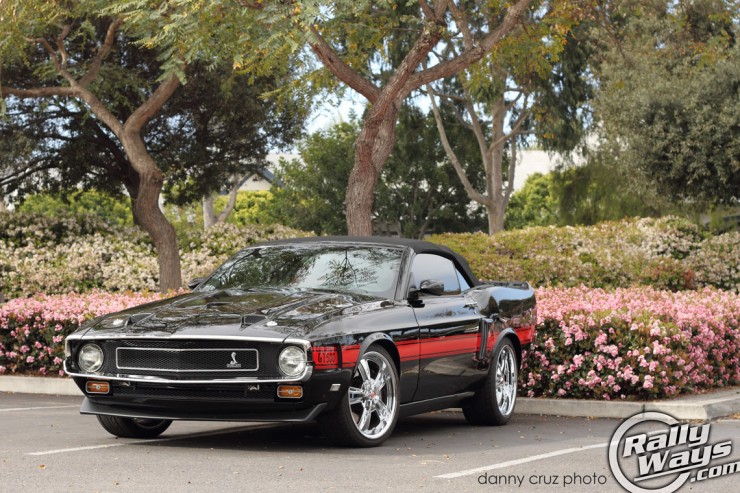 Interestingly, in classic American car fashion (think Corvette) the body is actually fiberglass. I reckon that’s a good thing for such a car. The car also features genuine Shelby wheels and tires and a slew of custom systems like the exhaust, hood, bumpers, wiring and lights. It’s classic down to the hood pins and modern down to the bits that make it GO.

The production version of the 2013 Shelby GT500 is a showstopper. So much that a friend of ours recently got offered more for his than he paid for. However, for show-stopping power, the final nod goes to this custom 69/2013 unique supercharged beast.