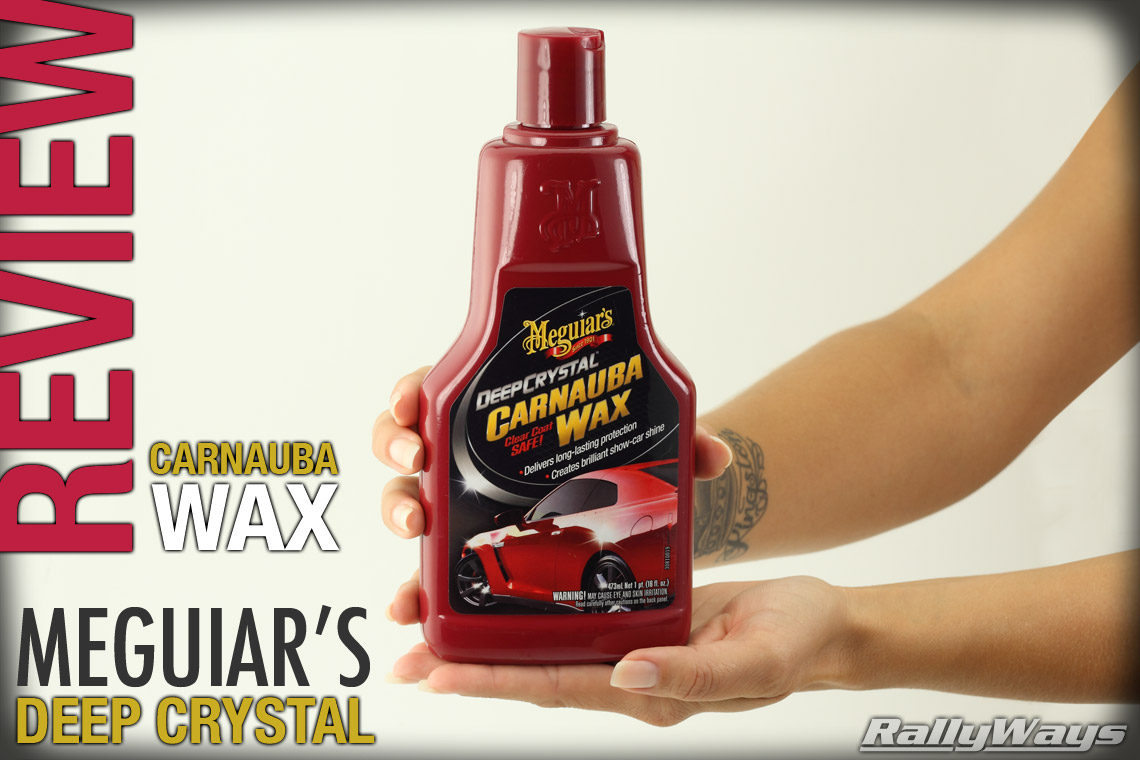 Meguiar’s Deep Crystal Carnauba Wax has become my “go to” wax when I need a car wax that goes on easy and looks great while being very affordable. I came by it by accident really. When I bought my NC MX-5 Miata last year my original intention was to perform a super detailing job like I did on the RallyWays Tacoma, but that didn’t exactly come about. Instead, I ended up with a quick 8-hour detailing job the first weekend and short 3-hour stints every other week thereafter.

When I performed that detailing project on the Miata I picked up a relatively cheap bottle of Meguiar’s Deep Crystal Carnauba Wax just to hold me over until I could order some Wolfgang sealer and maybe a tin of Pinnacle Souveran or Fuzion Estate wax. Little did I know I was going to like the Meg’s wax so much. That was over a year ago. Since then, I’ve been piling layer, upon layer of Deep Crystal Carnauba on the NC Miata’s True Red paint.

Meguiar’s Deep Crystal Carnauba Wax is for you if you’re the type that likes to wax your car often.

The stuff lends itself perfectly to the OCD car detailer. There are 3 very good reasons for that:

Many carnauba waxes’ recommended application involves working on one panel at a time. You apply the wax to a small section of paint, wait for it to haze over and wipe off. Wax on, wax off. This is to avoid the wax getting too hard from leaving it on the paint too long when you try and apply it to an entire car in one go.

Meguiar’s Deep Crystal Carnauba is a little different. The instructions advise you to apply it to the whole car and then wipe it off. Having said that, I have tried both methods with excellent results.

With a good applicator, you can apply the wax in a thin layer to avoid excess hazing. It glides on super quick and effortlessly. When it’s time to wipe it off, it comes off very easily and requires minimal effort. This makes quick detailing jobs fun. I was applying this stuff twice a month on Friday nights and enjoying every minute of it. I also experimented applying 2 layers using a similar process as I used in my Collinite 845 Review. Results were great. The wax is easier to work with than Collinite 845, so doing a 2 layer job is not a big deal.

When you wax often though, cost can be an issue. This is another area where Meguiar’s Deep Crystal Carnauba Wax shines. So don’t feel too guilty using a $10 bottle of wax as often as twice a month or even every week. But when you spend $100 on a can of premium wax, that’s a whole other story.

The downside of course is durability. Meg’s Deep Crystal looks great and protects your paint just fine. But on a daily driver, it doesn’t really last much past a month. If it rains often where you live, the rain and extra washing needed pretty much takes off all the slickness in a couple of weeks. In dry, sunny climates like here in SoCal, the scorching sun just burns through the stuff quite quickly as well.

The durability is not really a big deal if you know what you are getting into. Most waxes won’t last past the 2 month period anyway, no matter how good they claim to be. The key is to wax often. Even if you do it once every 2 months, this would be a good wax for the job.

The bottom line in this Meguiar’s Deep Crystal Carnauba Wax review is really very simple – I personally love it and use it often. I’ve used better waxes, but they also cost a lot more money. If you can’t justify spending upwards of $60 for a premium wax or if you wax your car so often than an expensive wax is overkill, you should try a bottle of Meg’s Deep Crystal and see for yourself. Below is a link you can use to order.

I like expensive premium waxes, but it would be snobby to discredit this carnauba wax solely based on costs. In a pinch, I’d put this stuff on a super car without thinking twice.