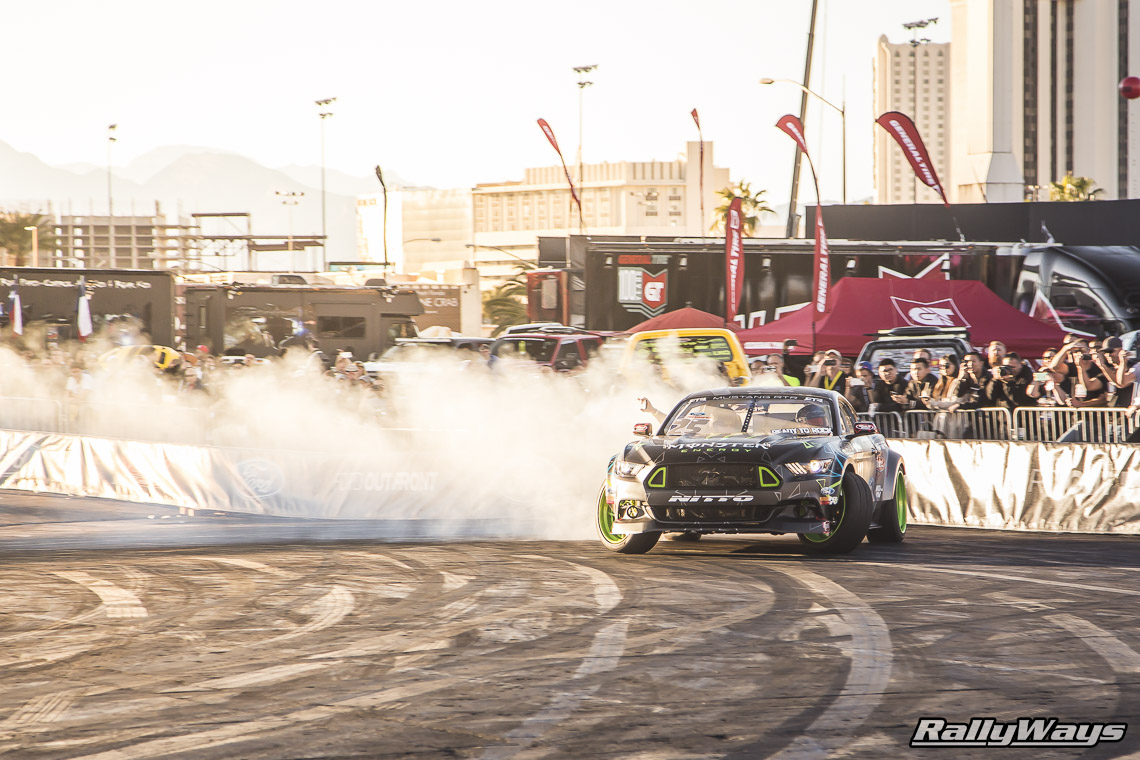 I shot this video of Mustangs drifting NOT into people at SEMA. The video features Vaughn Gittin Jr and some other dude drifting modified Mustang RTRs.

The main takeaway of this video is that neither of them ever lost control and they never plowed into the crowd. Of course, the crowd is protected by the big K-wall. But that’s not the point. As a friend of mine recently told me, “It’s all about the driver mod.”

No matter how good of a driver you are, nothing good can come from doing this on the street — Specially when leaving a car meet. Many Mustang drivers seem to think this doesn’t apply to them, hence the recent reputation and all of the YouTube videos showing Mustangs drifting right into a crowd of people.

Anyway, the point is that there is a big difference between a professional driver who spends his 9 to 5 drifting Mustangs for a living and Joe E Diot at the local Cars & Coffee. No amount of ego is going to make up for hundreds of hours practicing being sideways.

If you are at all interested, that’s how to ruin a car meet.

That’s the whole reason these two guys can drift Mustangs, together in a small confined area and not have an incident. Neither of them hits each other or the K-wall for that matter. Mustangs drifting in perfect control. That’s what this is.

There is some seriously good drifting going on here. The crowd surely loved it too.

Behind the camera work

In case you are at all interested in video making or camera work, I’ll tell you a bit more about the camera setup and how I shot the video.

I shot this Mustang drift video using my trusty Canon 6D with my 24-105L Series lens. Basically, this is the setup I’ve been using to shoot everything in the last 2 or 3 years. Before that it was a Canon 7D I sold.

Well, the Canon 6D does not have auto focus when shooting video. This means I have to focus as I shoot the video, constantly. Not only that, but this video was shot late in the afternoon when light is a bit limited. For this reason, you have to get creative with your camera settings in order to expose the video enough. Add to this the challenge getting good panning motion and even more, good focus.

The other issue was I had to pan by hand. I had no unipod or fancy rig to hold the camera. So I had to shoot the video and pan by hand, all the while manually focusing continuously. Overall though, I’m very pleased with how the video came out. I have a feeling you’ll agree.

I hope to see less and less Mustangs drifting into people. That just plain sucks. I actually like Mustangs. I said very good things about it when I reviewed the S550 Mustang when it first came out. I’d hate to see their reputation get worse thanks to idiot drivers. However, I want to see more of this closed-course stuff, where it belongs.