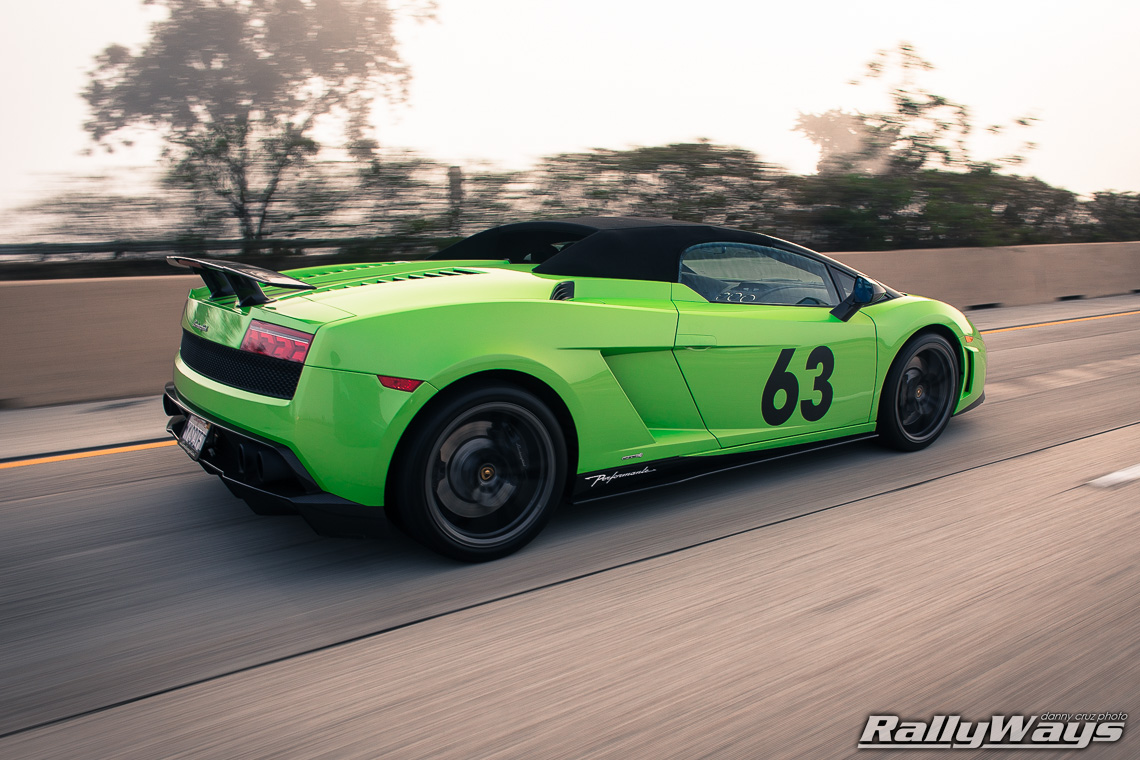 I photographed this Lamborghini Gallardo LP570-4 Spyder Peformante on the way to Symbolic Motors Cars and Coffee early 2014. It was not a planned photoshoot however. I was actually leaving Cbad Cars and headed to Symbolic with SDCE (San Diego Car Enthusiasts). The plan was to take some rolling shots of the SDCE cars in the group rolling to Symbolic Motors. This included a 90’s blue Acura NSX and a white Nissan GTR among others.

However, the group decided that speed was more important than a steady pace for photography and I lost them immediately after getting on the freeway. Seconds later, a couple of super cars appeared beside me, all on the way to Symbolic. Rolling next to me was a Lamborghini Gallardo Balboni and DoubleLow7’s Aston Martin V12 Vantage, which should at some point make the RallyWays car photography portfolio. The third car was this Lamborghini Gallardo LP570-4 Spyder Peformante in a beautiful bright shade of lime green called “Verde Ithaca.”

The conditions for shooting were tricky as the cars were backlit. It was 8AM and the sun was still coming up out of the East and we were moving South. I was shooting with my Canon EF 28mm 2.8. It’s not as versatile a lens as my Canon 24-105L and has an inexpensive Calumet CPL at the end as opposed to my 24-105Ls B+W circular polarizer. But I like doing rolling shots with it because it’s short and doesn’t get buffeted by the high apparent wind like the longer 24-105L does. Unfortunately, I also don’t have a hood for it (yet, until now) because I really hadn’t needed it (again, until now).

I was battling with lens flare all the way down towards Sorrento Valley in San Diego. Looking South I could see a thick cloud of fog on the freeway. I was trying to get my shots in before then thinking the fog would ruin things. Unfortunately, most of the shots I took before reaching the fog were plagued with lens flare.

Then we rolled into the fog. I kept shooting. This photograph is the result. The sun’s backlighting was no longer a problem as the strong light was diffused entirely by the fog. The fog also caused a soft dreamglow type of ambience to the picture. All in all, I was very excited at how it turned out.

After post-processing the photo the same night I posted it to a Facebook automotive photography group. Everyone seemed to love it. However, someone pointed out that I should used less “Photoshop motion blur.” This was an interesting comment, so I looked closely at the photo again. The most interesting thing is I never processed this photo with Photoshop. The photo was 100% processed in Adobe Lightroom 5 from the Canon RAW file. There is absolutely no motion blur added. It’s all natural and real caused by the slow 1/80 shutter speed and soft light. The only photo editing was color correcting to achieve the dramatic color balance I was aiming for.

This convertible Lamborghini in “look at me” green is one of the coolest rolling shots I’ve done in a while. Really proud of the results and I enjoy looking at it every time like it’s the first time.