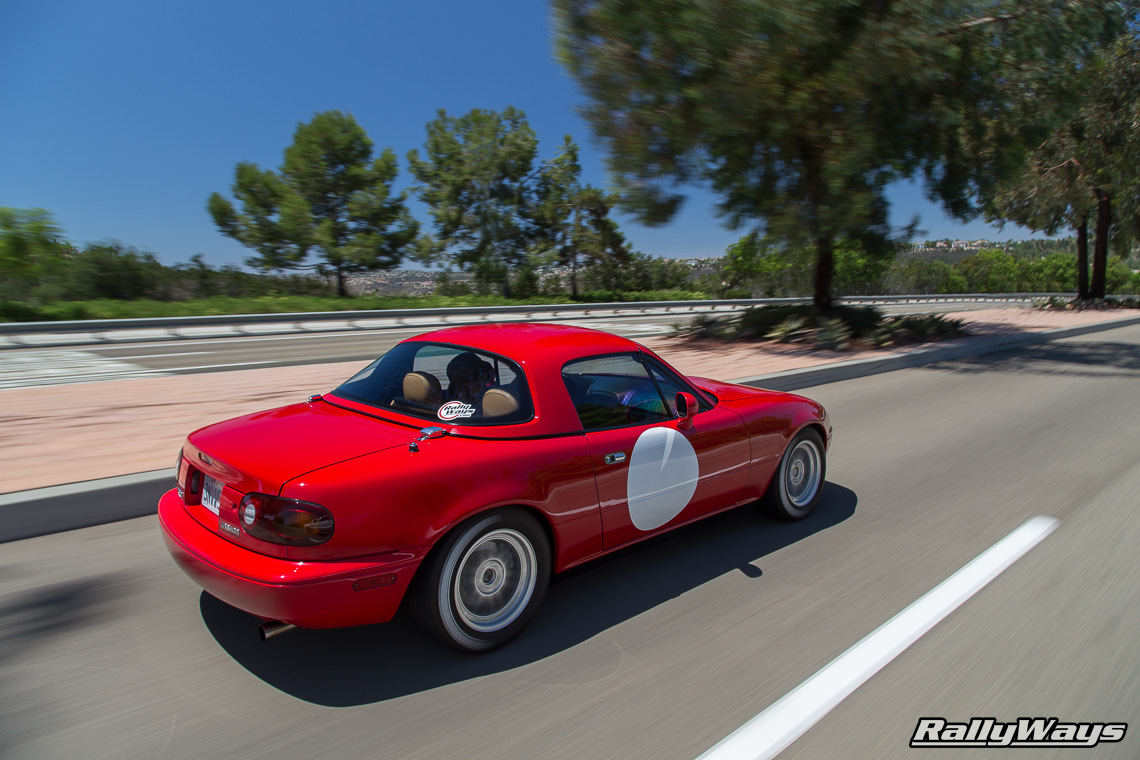 It has been a few years since I created the RallyWays Automotive Photo Portfolio and the RallyWays Miata had yet to make it in. Finally, here’s our red Miata with white gumballs. Naturally, a roller.

Since I love this car so much, I kept procrastinating until I found the perfect time to post it up. Well, time passed and I never got around to doing something about it. I had just finished giving the RallyWays Miata a nice detail and brought her to Cbad Cars. Later that day, on the way to grab some lunch, I handed over the keys to my wife so I could grab some rolling shots.

The time of the day was far from perfect. It was pretty much the middle of the day. The sun was scorching hot. The lighting was a bright as it could possibly get. Nevertheless, I don’t always have the opportunity to hand over the keys to someone I trust with my beloved red Miata, so I went for it. This shot is from a high vantage point as I was shooting from a a truck.

Since I had some time, I shot roughly 125 frames along the span of 3 different roads. I took my time to sift through them and picked about 10 favorites to edit. This is one of them.

For reference. I shot this with a Canon 6D using a 24-105mm f/4L lens. I had the lens hood on and I was shooting at the widest setting (24mm). I was also using a B+W Kaesemann F-Pro circular polarizer filter. The camera settings are as follow:

This is not the first Miata to make the automotive photo portfolio. A few years ago I posted a photo of my 2011 PRHT Mazda MX-5 which I sold a while back. That was a nice shot but it was hard-parked. Action photos are always more fun. This is something any Mazda MX-5 fan will enjoy. Regardless of which your favorite generation Miata might be. And by the way… a red Miata is a faster Miata. 😉