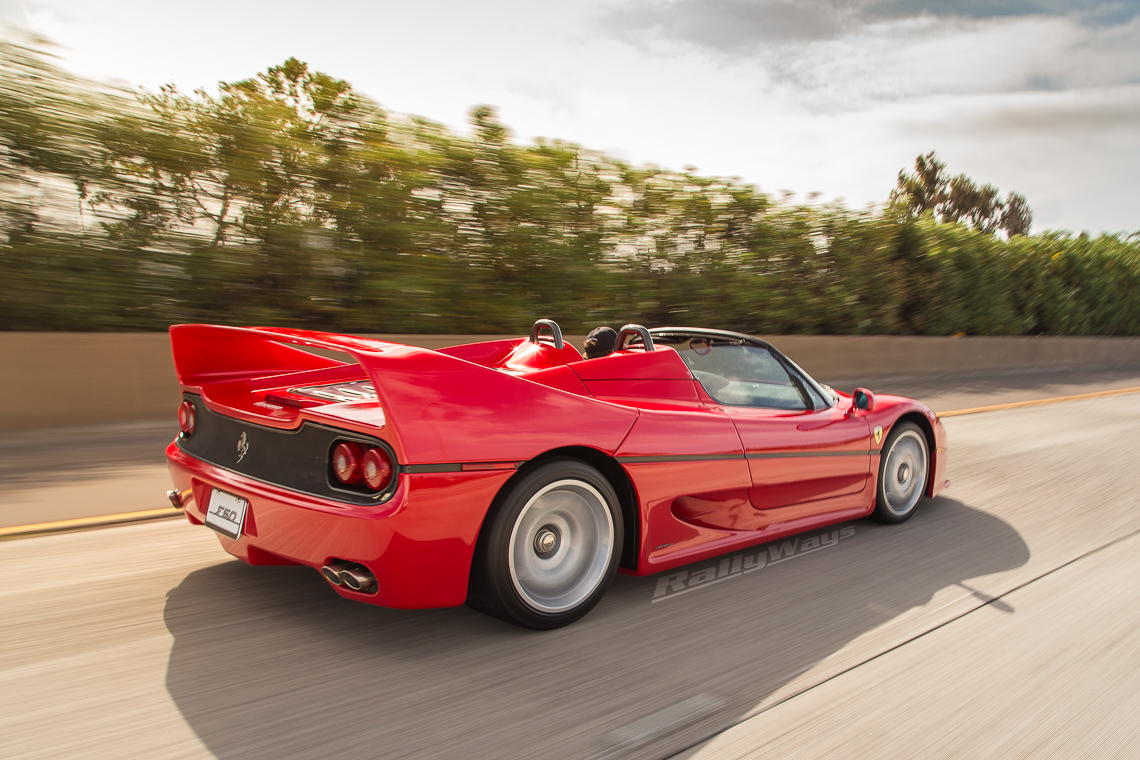 Sometimes, being late is not so bad. Thanks to being late, I was able to capture this photo of Bill’s Ferrari F50 rolling to Bella Italia.

It’s a typical case of being at the right place, at the right time. The plan today was to get to Bella Italia Car Show early. Bella Italia Car Show at Spanish Landing in San Diego California is an amazing Italian car show. The reason being is the setting. Spanish landing and Cancer Survivor’s Park is a very pretty location right next to some of the marinas on San Diego Bay. If you get there early, you can photograph super cars as they roll along the sidewalk towards the main show area. The surroundings are all beautiful grassy areas with a backdrop of the bay and the masts of many sailboats docked at the adjacent marinas.

I went over to Cbad Cars for a bit before heading over to Bella Italia. It was the end of the month meet at Cbad, which is always a great turnout thanks to the attendance of the Porsche Club of America, San Diego Region.

As it turns out I left my camera’s battery at home. I discovered the fact when I pulled my camera out to shoot a white Porsche 918 Spyder that was at the meet at Cbad Cars. Admittedly, I felt quite stupid, but not too badly since this is really the first time that’s happened to me in 3 years. I had to cut my time short at Cbad Cars to drive back home go get it. That meant I was due to arrive at Bella Italia later than I wanted to. I still arrived at 9am, at the start of the show, but I really wanted to get there by 8.

It still worked out for the better though. As I was driving towards San Diego Bay, I spotted Bill and Vita quite a ways down. It was quite obvious to me. I could see the Fayence Yellow Porsche Carrera GT and the Ferrari F50 immediately behind her. At least I was driving the RallyWays Fiesta ST instead of my Miata. The Fiesta ST at least goes!

I dropped down a gear, stepped on it and caught up. A minute later I was lined up for the shot. Thanks to the guy in the purple-wrapped Honda S2000 that was at Cbad cars earlier for moving out of the way. If you hadn’t moved I would’ve missed the shot. So, thanks.

My Canon 6D was set beforehand as I always do. My B+W circular polarizer was already lined up the way I wanted it and the dial on the Canon set to Tv, for shutter priority and set to 1/80 — a perfectly safe setting for freeway photos.

Other details include: ISO 160, f/9.0 and my Canon 24-105L at full wide 24mm. The light meter was set to overexpose a bit because I knew the subject car would be a little backlit. I’ve shot on this road and at this time multiple times so I know this from experience.

Next thing you know, I got this cool shot. Admittedly, it isn’t my sharpest rolling shot. However, thanks to the lighting, the angle and the fact that it’s a Ferrari F50 of all cars, it goes into the RallyWays Automotive Photography Portfolio. No question.

Needless to say, I’m glad I accidentally left my camera battery at home. Being late turned out to be a good thing this time. Just this time.