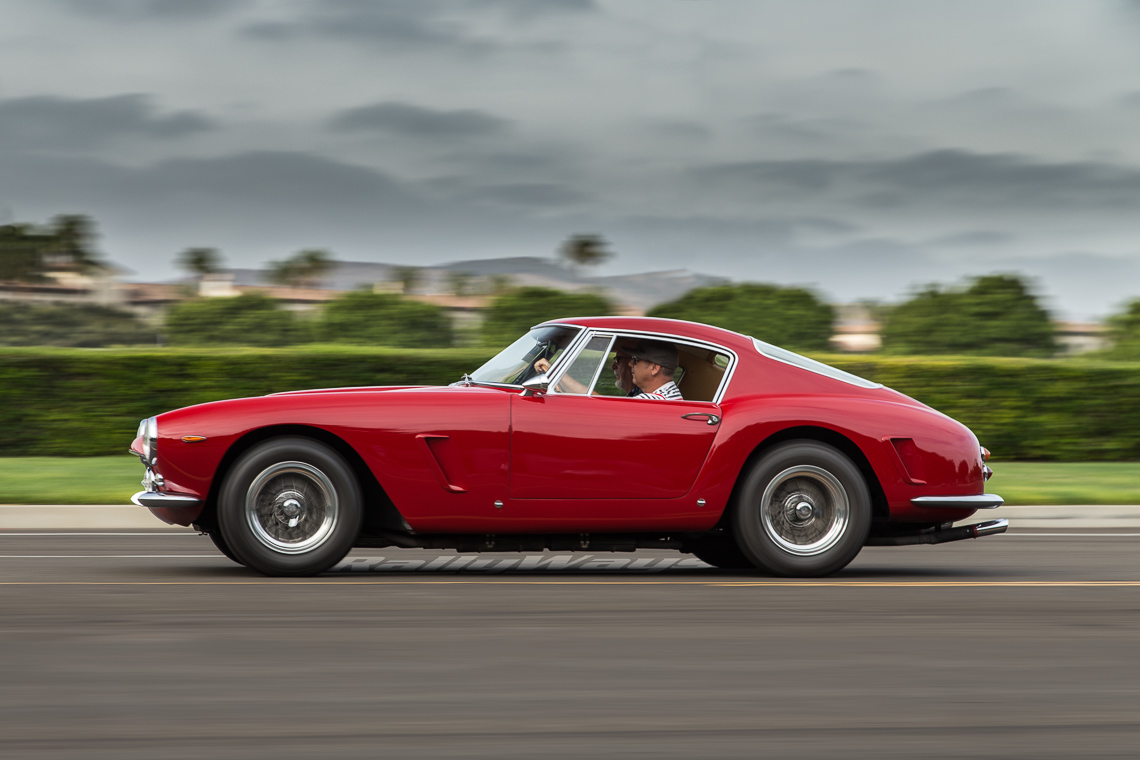 Tonight I was busy looking through my automotive photography collection, specifically photos I had taken at Cars and Coffee Irvine and I came across this dreamy Ferrari 250 GT SWB.

This is no coincidence really. I had flagged this photo and marked it with 5 stars when I was editing this batch a while back. I knew this was a photo I would be printing and framing soon enough. In the meantime however, I’ve decided to add it to the RallyWays portfolio. I just love it.

Of course, we’re going to talk about the 250 GT SWB itself, but first let’s look at the photo itself, as a photography piece, putting aside the fact that this is a multi-million dollar classic Ferrari.

This is the staple panning shot from C&C Irvine, taken from across the street. Interestingly though, I managed to avoid the newly built hotel in the background. Good. It’s also a commonly overcast morning, something that seemed to be the norm early morning in Irvine. All that said, the car is tacky sharp and the motion of the lines just goes so well with the shape of the car. I really can’t stop looking at it.

I’m not going to start throwing numbers at you to impress you. I had to look up the facts. There seems to be a lot of conflicting information about the Ferrari 250 GT SWB on the web however. It’s obvious some really sloppy people have just thrown words onto websites without double checking their sources.

This is the staple panning shot from C&C Irvine, taken from across the street. Interestingly though, I managed to avoid the newly built hotel in the background. Good.

The 1960 Ferrari 250GT SWB hails back to 1959. 1960 seems to be the year mostly attributed to the car. Don’t quote me but it would be safe to assume that the production was in 1959 for a 1960 model year. I’m sure one of you Ferrari-history-buffs can likely quote the exact figures and even the production dates.

Also referred to as the Ferrari 250 GT SWB Berlinetta – The term SWB stands for short wheelbase. The 250 GT SWB is a direct descendent of the LWB 250 GTs with a shorter chassis producing a wheelbase of 2400mm (94.5 in). If you are guessing LWB stands for long wheelbase, you’d be right. As you probably imagine, the short wheel base 250GT provided livelier handling and improved cornering ability. It also looks more motorsport than grand tourer.

Funny that Wikipedia states 176 examples of the 1960 Ferrari 250GT SWB were produced, but EVO and Octane magazines state 167. I suspect a typo. Somebody must have swapped the 6 and 7. Anyway, who cares? 176 or 167 produced, that’s still a handful of cars which would explain the multi-million dollar price tag if you manage to find one.

History has it the same team that developed the 250GT Berlinetta SWB were eventually responsible for the most desirable Ferrari of all time, the venerable 250 GTO.