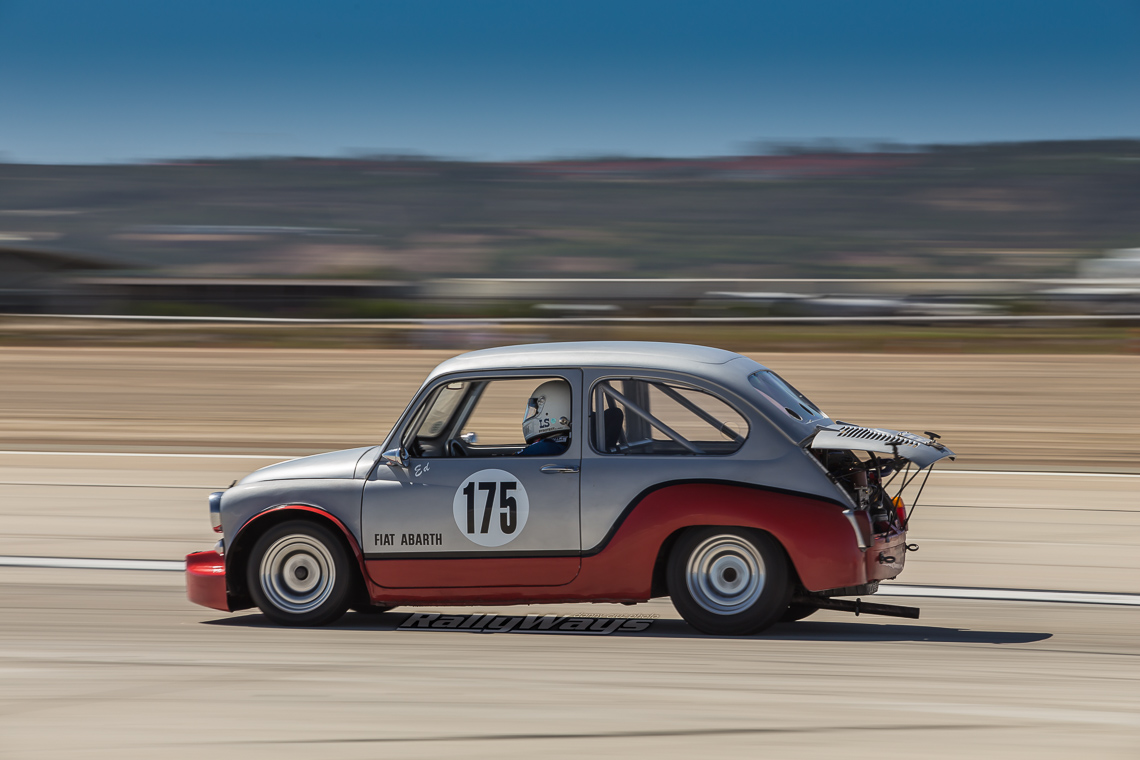 We are so used to hearing the term Fiat Abarth 500 that we forget there is a whole array of vintage cars that bears the classic Fiat Abarth name. This one is a proper one, and like many other classic Fiats of the time, is a racer.

This is supposedly a 1964 classic Fiat Abarth 210 Berlino Corso. Read on though. I think that’s actually wrong. I’ll admit, I had to look all this up. We are so used to hearing the term Fiat Abarth 500 that we forget there are many more models of the classic Abarths.

I have to tell you. It’s really hard to find appropriate information about these cars on the web, as it’s all so vague. You almost have to find an expert on the subject and listen to the stories first hand.

Here’s why: The booklet provided at Coronado Speed Festival says the car is a Fiat Abarth 210 Berlino Corsa. However, in doing some research about these classic Abarths, I could only find the term Berlina… which supposedly means sedan, although this is a 2-door, so who the heck knows? Then there’s Corsa, which most of us know is Italian for “race”… as in “course” or “road course.” Get it? So most likely, “Berlino” was a typo. I’m willing to bet it’s Berlina Corsa. Fiat Abarth Berlina Corsa. Anyway, moving right along…

Like I was saying, the car is from 1964 and bears the number 175. Again, the booklet from Coronado Speed Festival says the car has a 1000cc engine and probably weights 3 pounds — Definitely looks like it does. The driver’s name is Ed Roll and the car resides in Tucson Arizona. Looking back in time, it seems it’s a regular at Speed Fest having appeared and raced at many other events in the past.

This classic Fiat Abarth is famous for having the engine lid propped up permanently. I’ve head all kinds of varying stories as to why this is. However, the one that makes the most sense is the one about engine cooling. Supposedly, because this is a souped up car when compared to the standard classic Fiats, the engine lid needed to be open or the engine would overheat. So, the maker decided to prop it open permanently and therefore the legend was born.

I’ve also heard stories about downforce. Makes sense to me. I mean, it does looks like a wing.

Stories aside, the purpose of this post is the photo. This is the RallyWays Automotive Photography Portfolio after all. This portfolio is becoming more and more a motorsports photography portfolio as of late.

This was shot right after turn 9 at the airfield track at Coronado Speed Festival 2015 during Fleetweek San Diego. The camera is a Canon 6D with a Canon EF 70-200mm f/2.8L IS II USM Telephoto

and a B+W circular polarizer. The day was bright as heck so I shot at ISO 100. The shutter speed was 1/60 of a second, helping to achieve that since motion blur to the background.

I’m a freak for sharpness when it comes to the subject itself, and while the car isn’t sharp from front to back because it’s at a slight angle, what is sharp is as sharp as it’s going to get, and I love it. Aperture is at a deep F/11, but that’s only because I didn’t have a neutral density filter available to filter out some light to help drop that f-stop a bit. But it is what it is and it came out great and that’s why it’s here. The Canon telephoto lens zoom was at 155mm.