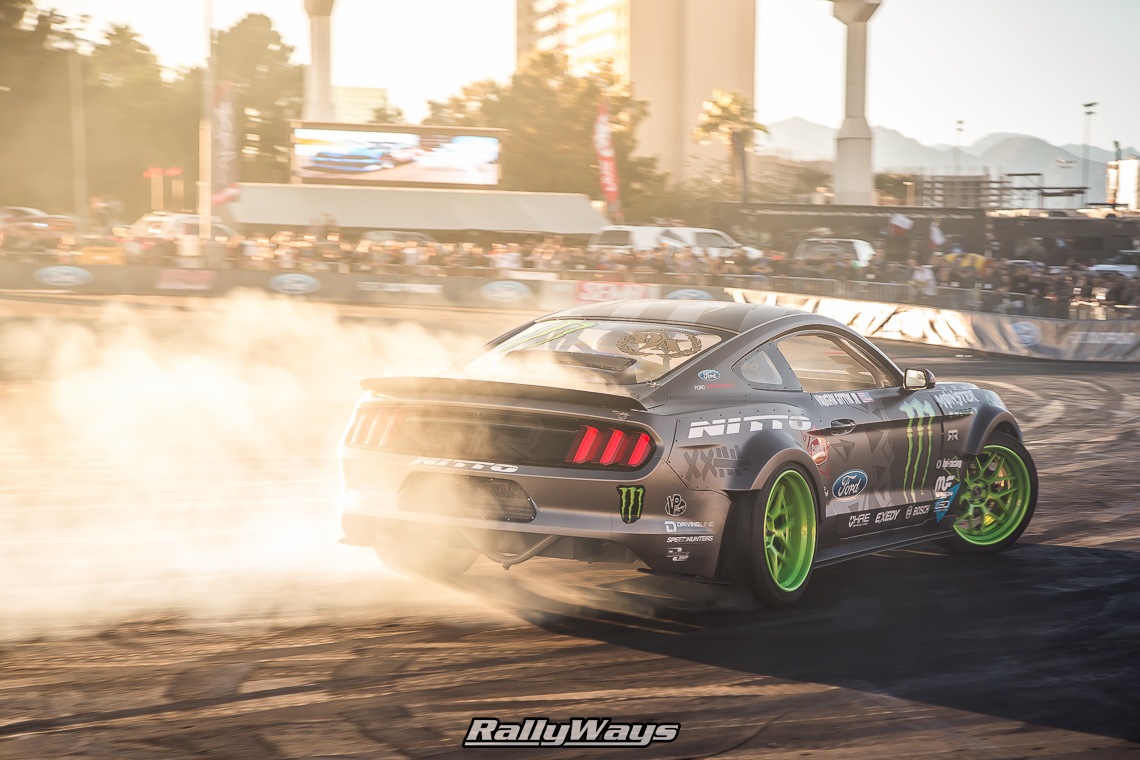 SEMA 2015 was an interesting show for me. Unlike other years, things didn’t quite go as planned. A number of mishaps like the odd show location of my SEMA featured vehicle #RallyFist, problems with hotel reservation, flight issues and the bad weather all converged to drive me completely insane that week.

On Friday afternoon though, all things came together and I was able to salvage what I could of the trip. This shot of the Vaughn Gittin Jr Mustang drift demo was one of those great things that came together for me on Friday. I literally took this photo just minutes before the final run of the #FordSEMA Out Front drift demos and before the start of SEMA Ignited 2015.

Ford always puts on a great show at SEMA. The drift demos of Ford Out Front are always amazing and impressive. What’s best is that people can ride along with Vaughn Gittin Jr as he drifts his Mustang all over the tiny lot. It’s pretty sketch how close he gets the Mustang’s back end to the wall without touching it.

The sun was about to set. It was barely peeking over the hotels in the background. I purposely positioned myself to have the car slightly backlit. However, when going into a corner close to the K-wall, the sun was off to the side, making this angle ever-so-slightly easier.

I wasn’t looking for tons of motion blur in the background like I do with some of my shots. Given the low amount of light, this would be harder than I wanted to deal with at the time. The angle of the car and the crazy amount of tire smoke would be plenty enough to show a sense of motion, so I opted for a shutter speed of 1/250 instead of the usual 1/60 or 1/80 I would use for a scene like this.

I took a bunch of sequences and then picked some of my favorites. There are a bunch of other good shots that I like which I might use in social media and for galleries and what not. This one was my favorite of the bunch. There is one thing you can’t tell from the shot and that is the amazing noise the Vaughn Gittin Jr Mustang makes. The sound is truly mesmerizing and perfectly race-car in every sense of the word.

I didn’t photoshop it at all. The small amount of edits were in Lightroom and they included balancing the colors a bit, balancing the shadows and highlights, pushing the color temperature up some and cropping it to my liking. I also reduced noise a little bit. The shot was taken at ISO 320. If you like it, share this post…