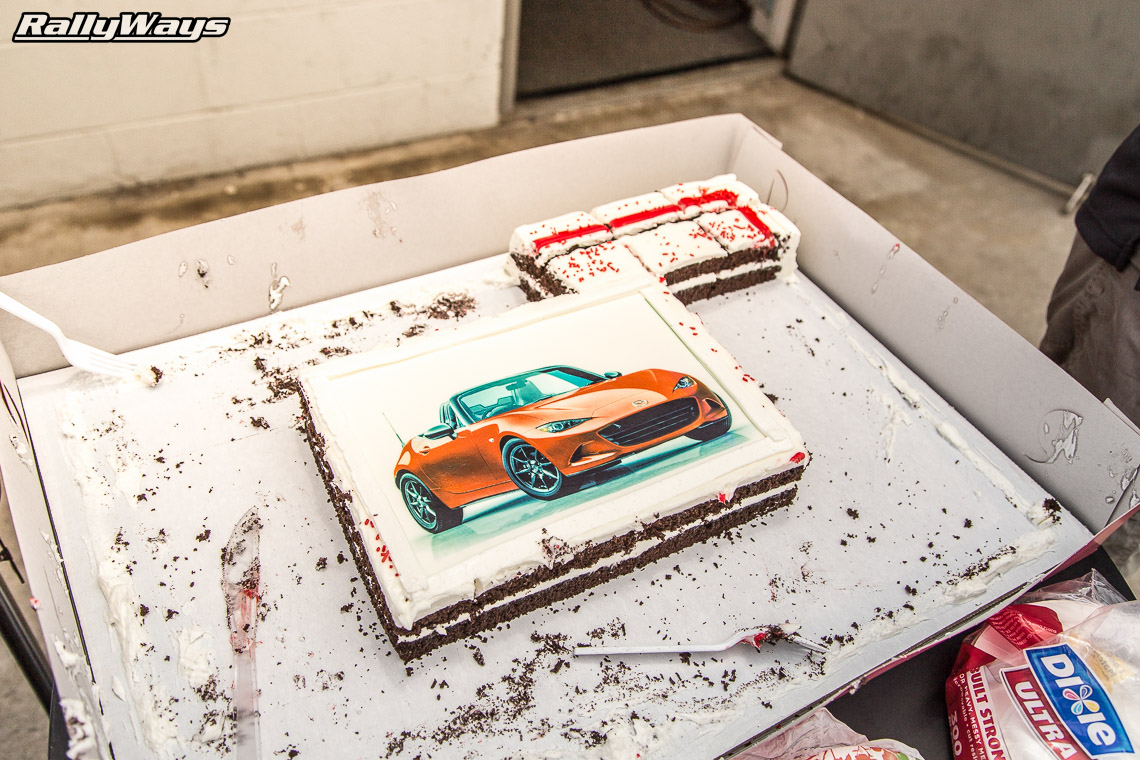 This weekend Goodwin Racing and Rocky’s Miatomotive hosted an ND Miata launch party at their shop in San Diego, California. This was a unique event complete with a Miata birthday cake.

This was one of those special public showings of the new 2016 Mazda MX-5 Miata ND that are happening right before the stock of new cars is delivered to dealers.

What makes this showing special is that it was directed specifically at Miata enthusiasts, not simply for the general public that’s somewhat interested in the car. These are people who scrutinize deeper about the new Miata’s inner workings and other intricate details.

For example, this event featured one of the first public showings of the car where it was put on a lift so that Miata enthusiasts could closely examine the chassis and suspension components. Additionally, Rocky Murphy took the time to put the car on the scales to check out each corner’s weights as well as overall weight. The fact that this Miata is so much lighter than anything that came after the original NA is still something that is blowing people’s minds. Putting the car on the scales and seeing it for yourself is almost a necessity. 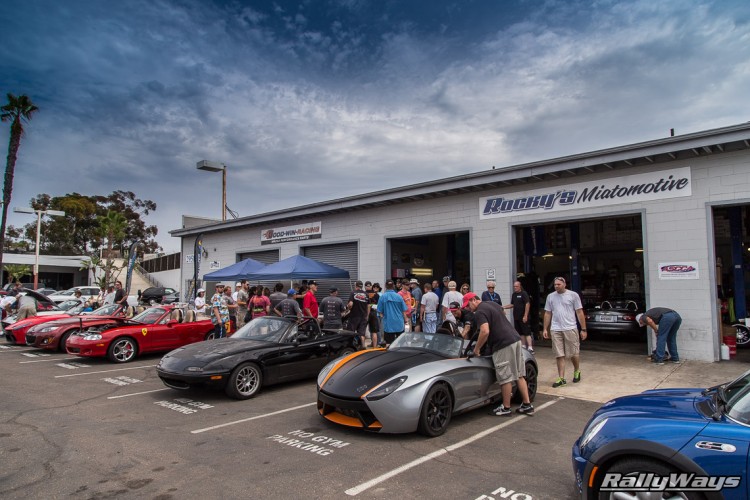 The event was a smash hit and quite full. Many local Miata enthusiasts flocked to Brian Goodwin’s and Rocky’s shop. This was carefully planned too. The event was held on a Sunday, making access to the parking area much more convenient.

They even had a birthday cake made for the new Miata. The cake had the car’s image printed on it. Nice.

Many launch edition orders have been placed for this new 2016 Miata. Those that haven’t placed their order or can’t do it just yet are still eager for the cars to start showing up at dealers. Word needs to be get out soon about new owners and their experiences with the new Miata.

At the Goodwin Racing / Rocky’s Miatomotive event, attendees also got the chance to sit in the new car and have their picture taken. This may not sound all that exciting, but it is. You see, at previous ND showings, only the press had enough time to sit in and check out the car. This event however was a time were enthusiasts could actually take the time to admire the car and sit in it without being in a huge stressful rush.

Bauer Limited was kind enough to bring over not one, but two, Bauer Catfish cars for the event. One car was the same car I photographed at Miatas at Mazda Raceway Laguna Seca and previously also at Project G LA Big Miata Meet. There was also a very cool red one with a set of wheels that I absolutely loved. I personally got a chance to sit in that one. Hopefully one day soon I can drive one.

The clock is ticking for ND Miata launch party events. At any moment, the parties are going to be thrown by owners themselves with their new Miatas.

For those of you interested in the intricacies of being a weight-weenie and corner weights, see the photo below. This is with no driver, with 6 gallons of gas on a pre-production car.

Big thanks to Goodwin Racing and Rocky’s Miatomotive for hosting the event. I personally can’t wait and see what these geniuses are going to do with the new cars to make them ever more exciting track-duty machines. Looking forward to a Miata ride-along at the track soon enough.