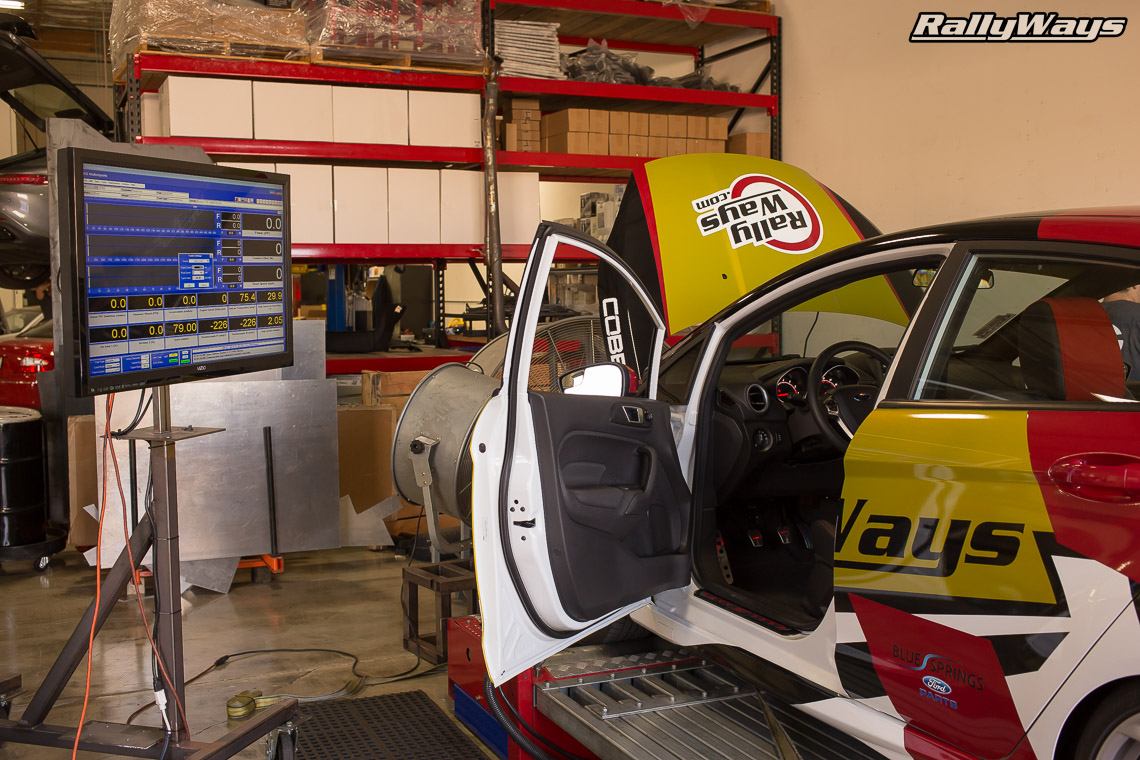 With any car build where performance figures will be increased it’s a good idea to establish a baseline to use as measuring stick.

Given the array of COBB Tuning Fiesta ST performance parts we are installing on RallyFist, our Ford Fiesta ST project car, we took the car to HG Motorsports to get the stock Fiesta ST horsepower numbers before we started modifying.

Yes, like with any other car, Ford has published power figures for the Fiesta ST. Those are the following:

These figures for the Fiesta ST horsepower (stock) are useful, but not when you’re trying to see exact gains when doing power mods. See, Ford likely measured these at the crank of the engine and maybe even using premium fuel, likely 93 octane. There is no convenient way to measure power at the crank on a fully built car — The engine needs to be outside of the car for that. The easiest way is to measure the power at the wheels. Because of all the moving components between the crank and the wheels, there is some parasitic loss in power. For this reason, horsepower measurements at the wheels is always going to be lower.

At the end of the day, the power measurements on a “wheel dyno” can be a very accurate representation of the power at the wheels, but are always going to be dependent on doing a comparison run after the mods are complete, on the same dyno. By the same token, any estimation of power at the crank or flywheel will be just that, an estimation.

Additionally, while we can get 93 octane and higher gas in California, it’s as rare as gold. We will be running 91 octane on RallyFist, so both the baseline Fiesta ST horsepower numbers and the upgraded power figures should be done on 91 octane. Remember, we’re not going for ultimate power, so we’re not using race fuels, E85 or any specialized fuel — Just good ol’ pump gas. Our goal is to improve a street car that can be filled at any regular gas station.

Numbers Vary from Dyno to Dyno

The dynamometer, dyno for short, to some a rolling road is the device used to measure the power of a car engine by running the car’s wheels on a big roller. Chances are, if you are reading this you probably know what a dyno is so we won’t dig any deeper.

The important thing to keep in mind however is that readings will vary from dyno to dyno. There is DynoDynamics, DynoJet and Mustang Dyno. I’m sure there are others, but I’ve never had a car that’s a dyno queen, so I haven’t payed a whole lot of attention. This one isn’t going to be a dyno queen either, by the way.

HG Motorsports’ dyno is DynoDynamics. They have a reputation for having a very accurate dyno and many of the local car people that are serious about gauging performance upgrades use it. I know this because when I asked in the private San Diego Car Enthusiasts’ Facebook group who to use I almost got a unanimous “HG Motorsports.”

Now here’s the deal, DynoDynamics reads lower than other dynos, particularly DynoJet. Don’t ask me why. That’s just the way it is. The point is it reads lower and many people who only care about seeing high numbers can be disappointed. What we are looking for here though is accuracy in reading the current numbers and then comparing them to the horsepower readings after all the COBB Tuning upgrades. For that reason, it doesn’t matter if the readings start lower because we are still going to very accurately be able to see the horsepower gains. DynoDynamics does have the ability to also put out a DynoJet estimate which is about 17% higher.

Now here’s something to confuse you a bit more. I already said that the DynoDynamics dyno estimate of DynoJet numbers is about 17% higher. That’s the number that a DynoJet would more or less read, at the wheels. However, DynoDynamics believes that number to be a better representation of an estimate of power at the flywheel — Which makes a little more sense when you look at the charts and see that the DynoJet estimation is only around 12 horsepower off from the Ford engine dyno readings. Also notice that the chart with the DynoJet comparison actually reads “Flywheel Horsepower” and “Flywheel Torque” — even though that’s what DynoJet would be reading at the wheels. Because, that’s also DynoDynamics’ estimate of flywheel power. Got it?

If this doesn’t make a whole lot of sense, don’t worry. What’s important is seeing the horsepower gains after the mods — those will be perfectly accurate. 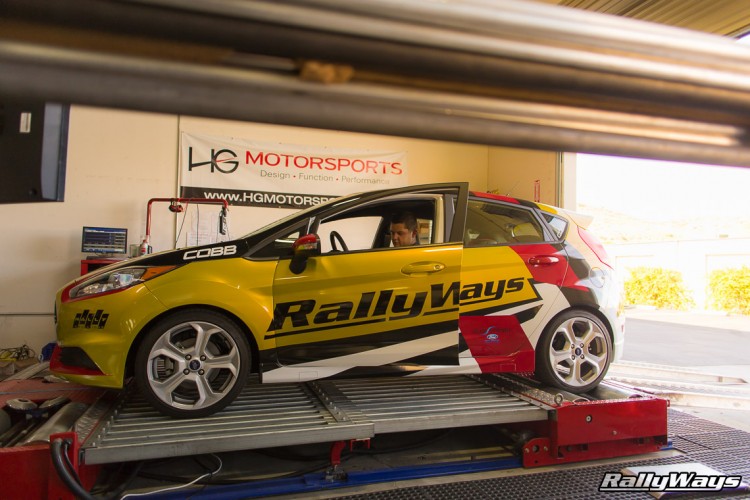 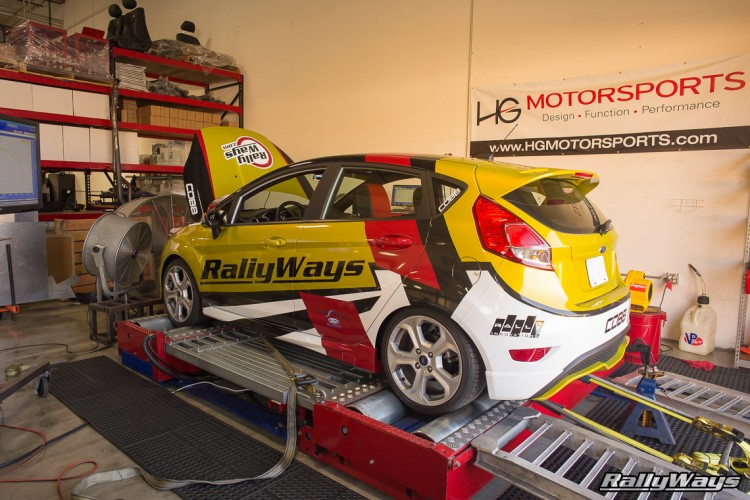 HG Motorsports is In Sorrento Valley in San Diego. This means we are super close to sea-level. Oxygen levels have a direct relationship with power levels, so keep that in mind. Being at sea-level will generally give you more power than being in the mountains up high where the oxygen levels are lower. Temperature plays a big role too. The day we did the dyno run the temperature was that of a very comfortable early summer afternoon at around 77 degrees fahrenheit.

Mike Petruzzo from HG Motorsports did the work while I hung around and took pictures and video. Check out the video below of one of the 3 runs.

So what were the final stock Fiesta ST horsepower numbers? The maximum we got was in the third pull I believe, after letting the car cool down a bit.

See the dyno charts below for all the details. 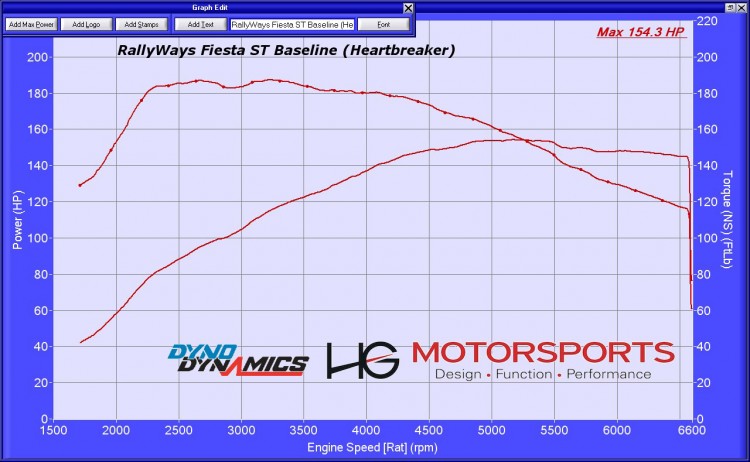 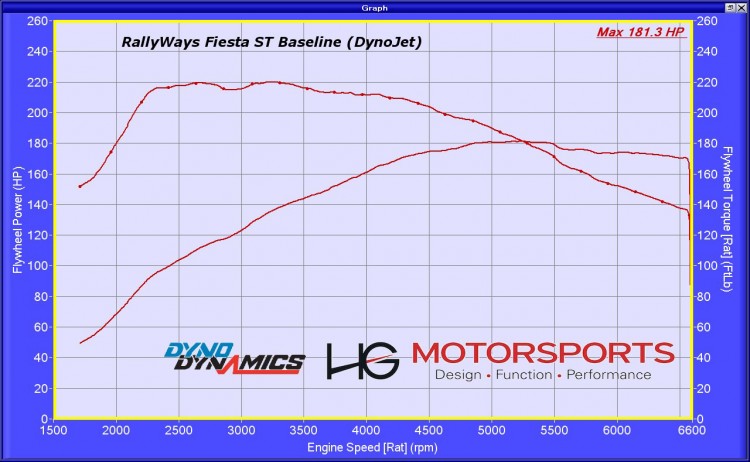 Now, for those that need to see higher numbers, here are the DynoJet comparison numbers:

For reference, The Smoking Tire’s Fiesta ST stock, read 184.09 HP COBB Tuning SoCal’s Mustang dyno. I don’t know the conversion for a Mustang dyno, as there are many variables involved, but 184.09 HP is awfully close to the DynoJet estimate of 181.3 HP on our Fiesta ST. Seems logical to me.

So there you have it. I’ve put both the DynoDynamics and DynoJet comparison numbers up because they will be useful once we do the second trip to HG Motorsports to get power readings after all the COBB Tuning upgrades. This is because when we do that, we’ll also be getting both comparison numbers at the time.

What we’ll do is very simple. We’ll compare the old numbers with the new numbers and subtract one from the other to see the difference. That will be our horsepower and torque gains.

To see the performance parts that are being added as we speak, go see our RallyWays Fiesta ST Parts List.

To keep up with our Fiesta ST project car, #RallyFist, check out all the RallyWays Fiesta ST articles available and also be sure to subscribe to our email list for free. When you do, be sure to click the special interest box for Fiesta ST which you can access when you get your subscription confirmation email.

We’ll be back soon with a story for the new numbers.