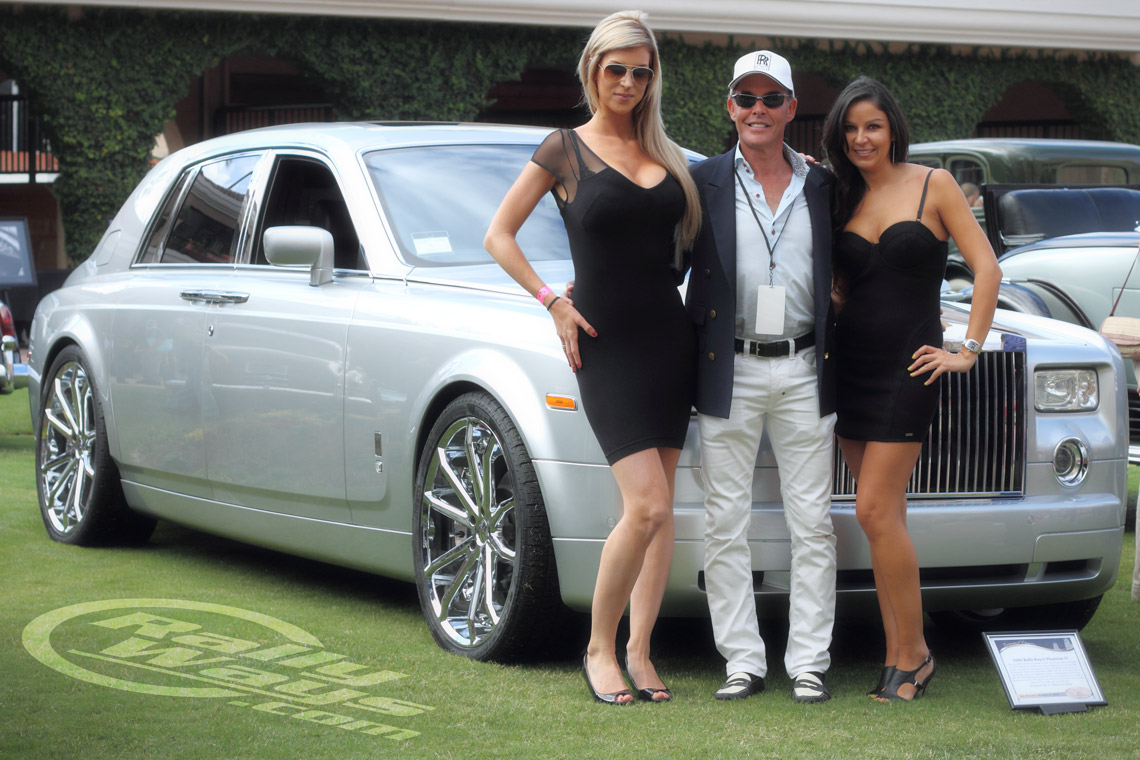 This is the third consecutive year of the Del Mar Concours D’ Elegance and my very first to attend. As far as antique car shows in California goes, this is a very prestigious exhibition of rare vintage and exotic cars that even includes amazing modern classics. 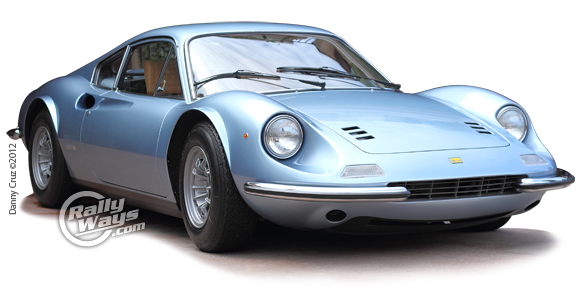 The Concours D’Elegance is held at the Del Mar Racetrack Paddock and October 21st 2012 marked it’s third consecutive year. This year didn’t occur without drama however.

Rain. And lots of it.

For all hours of the night and early morning prior to the event, the skies bucketed rain all over Southern California. As I looked out the window at 8 O’clock on the morning of the event I questioned the survival of the show while I prepared my photography gear. By 9am, the rain had subsided a bit and I figured that such an important event would be held regardless. After all, it was rain, not a hurricane.

God must really love gear heads though. The rain had completely stopped by the time I arrived at the Del Mar Race Track entrance. At 10:30am I walked through the gates of the paddock and even though the show had officially started, many of the participants were still busy detailing and drying their cars. Not every attendee has the benefit of a transporter to carry their beloved show car. Many cars had to be driven in.

The turnout was surprisingly good despite the weather. Many brave men and women brought out enough cars to have a full show concentrated in the main section of the Paddock. Yes, it seems attendance of both contestants and spectators suffered a bit, but overall the turnout was solid and successful.

For all hours of the night and early morning prior to the event, the skies bucketed rain all over Southern California.

Personally, thinking in someone else’s shoes, without an enclosed trailer I would’ve not brought out my own collectible show car. I mean, a 1970’s and newer sports car can deal with the rain somewhat, even if the owner has to spend hours upon hours cleaning it up afterwards. But I cannot fathom the idea of the 1930 Cadillac V-16 Roadster that won “Best of Show” getting fully wet by heavy downpour. As the owner, I’d likely spend the next 3 months with my wife’s hair dryer blowing at every nook and cranny while I dry the entire thing with the rarest Mongolian cashmere. I mean, galvanized steel has roots that date back to 1742, but doubtful that many of these historic cars used very good rust prevention technology.

The sun came and went popping thru clouds and brume for most of the late morning and early afternoon. Lucky for me, this kind of soft lighting is perfect for photography. So, if you didn’t attend the show and are now viewing it thru my photos, you can thank the weather for the smoothness of the shots. Even better, we’ve been having record-breaking heat waves throughout Southern California this summer and early fall. The cloudy skies provided cooler temperatures and a more enjoyable time at the Concours.

The show proceeded as normal from there on.

Below are some highlights from the Del Mar Concours that can’t be missed.

This 1973 Ferrari Dino GT presented by Cavallo Motorsports and Jon and Mary Gunderson was my own personal show favorite. The literature described it as 1 of 5 “Chairs & Flares” Dino coupes made for the USA. This makes it one of the rarest Dinos. The story goes that the car was held by its original owner until recently when it was bought and restored by the current owners. The car is considered to be restored to “better than new” aesthetically and mechanically. My personal opinion about this car is simple: There was simply no car more beautiful than this Dino in the entire show. The same way some claim the Aston Martin V8 Vantage is the most beautiful car in the world by today’s standard, this Dino GT could be considered one of the most beautiful cars ever made by ANY standard.

Given Carroll Shelby’s recent passing May 10, 2012, Shelby Automobiles was one of the featured marquees at the Concours – And there was no lack of Shelby representation. Everything from modern GT500 and GT350 Ford Shelby Mustangs to classic Shelby Cobras were on display on the grounds. There was even representation of Shelby Cobra cars from the pre-Ford years. One great example was a red 1964 Shelby Cobra CSX2492.

Ferrari and Porsche representation was both classic and modern. On the modern end of the spectrum, Ferrari and Porsche participants didn’t skimp on rarity – Super exotics 2003 Ferrari Enzo and 2005 Porsche Carrera GT where present and definite show-stoppers.

On the classic side there was an absolutely-pristine-left-the-assembly-line-yesterday 1955 Porsche 356 Pre-A Continental and a soon-to-be-classic 1983 Porsche 911 SC (See the gallery at the bottom.) The 911 SC is regarded by many as one of the most robust and reliable builds ever to come from Stuttgart.

In the classic Ferrari realm was a 1964 Ferrari 250 GT Lusso of Pininfarina design. The car is ultra rare. It has even gone into the history books that one example of this car previously owned by Steve McQueen sold at auction for $2.3 million dollars! Think about what this means when compared to the 2003 Ferrari Enzo that upon its original releases sold for around $670,000 – and now that number might be around a million.

Many times I’ve seen a Rolls Royce Phantom roll by in one of the most exclusive neighborhoods in San Diego County. However, this was my first chance to see one in detail and in the flesh. This 2006 Rolls Royce Phantom VI is as luxurious as you imagine it to be and presented by Dr. Marty and the beautiful girls from the Concours.

Of course, we cannot forget the mega classics – The life and blood of the Concours D’Elegance. These are the cars you can usually only see in a museum or in a classic Hollywood movie. No, there was no Duesenberg… A hint of a single water molecule in the air and a spec of a cloud 30,000 feet in the sky is enough to keep one of these inside Michael Jackson’s freezing time-capsule. Maybe next year. However, what could be seen was not far from being just as impressive. For starters, the Best of Show winner 1930 Cadillac V-16 Roadster and equally impressive 1931 Cadillac 370-A V-12 Coupe where highlights of an era where Cadillac was the elite of the elite. The muscular look of the 1937 Cord 812 Supercharged Phaeton (above) proved that even in the late 1930’s cars were a work of art.

Plenty of race car action was also present. This is of course a category that is also well suited for Shelby Cobras, such is the case with Superformance’s 1965 Shelby Cobra S/C Mk111, a replica of the third generation 427 Shelby Cobra. A Gulf gas logo-clad 1965 Shelby Cobra Daytona Coupe by Factory 5 took the Shelby representation further. Apart from all the Shelbys, there was a true modern-era Fabcar Engineering SCCA 1986 Porsche 944 GTR that showed signs of many, many hours of track duty.

Perhaps the most unique of the race cars is the 1948 Kurtis KK200 Indy Car – A car that had raced in Del Mar, the same location of the Concours, back in 1949! The car was driven by Neil Carter for that race. Furthermore, the little Indy car raced on tracks all over the country and was driven by San Hanks at Indianapolis Speedway in 1950. The car still bears the name “San Hanks” next to the cockpit.

Finally, and certainly not least were unique cars like the 1964 Triumph Spitfire, 1957 Ford Thunderbird Convertible and 1960 Buick Electra 225 Convertible.

And lest not forget the beautiful girls from the Concours. Thanks for helping make our photos even prettier.

The Concours D’Elegance in Del Mar is truly a benchmark for automotive beauty. It was an honor to attend. The organization of the event despite the inclement weather says a lot about the hosts, organizers and judges. Truly an epic gathering of car fanatics in their highest form. Looking forward to next year.

But wait… It’s not over yet! Remember how I said the rain had stopped before the show began?

…and the skies open up!

As I took a couple of extra photos while the show cars where leaving I noticed the clouds getting denser. The air became more humid every minute. Some exhibitors proceeded to drive off while others promptly loaded their showpieces into their transport containers.

As I walked outside the Del Mar Thoroughbred Club Paddock gates at 3PM, the skies opened and every drop of water that was held in the sky during the show was unleashed. For 10 minutes it poured like it had not poured all night. Yet, not a drop of water fell during the hours of 10am and 3pm. Someone in that group of car lovers must have been praying – lots!

What follows is an entire additional gallery of photos from the Concours in case you haven’t had enough! Please take a second to subscribe to RallyWays.com with your email below so you won’t miss any amazing future stories like this one.