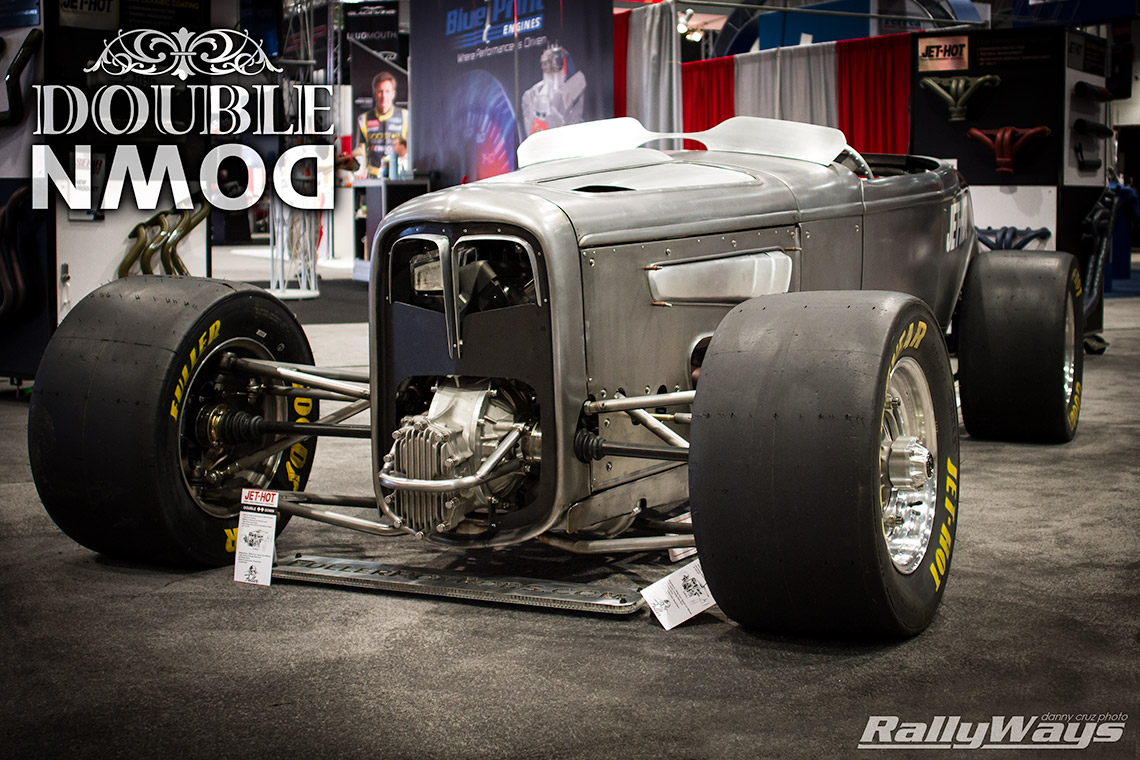 Back in 1971 a gentleman named Emmett Burton, outside of Atlanta Georgia, decided he wanted to build a car and drive it cross-country to see how fast he could do it. However, Burt Reynolds stole his thunder.

Before he could finish the build, the movie Cannonball Run came out. Upon seeing a major movie come out based on what he wanted to do, he was hugely demoralized. He laid down his tools next to the unfinished car that was up on jack stands and walked away. The car is still sitting there today. 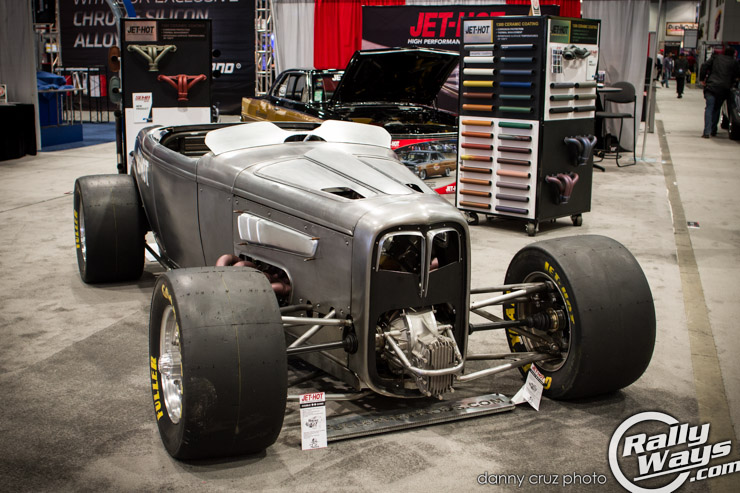 Walking the show floor at SEMA, this car, called the Double Down 1932 Ford Roadster immediately grabs your attention. It is one of the most unique hot rods you could ever lay your eyes upon. It’s not a car built to be painted with red flames or even painted at all. It’s a purpose-built machine created to do one thing – DRIVE. It just so happens to look incredible at the same time.

The car was on display at the Jet-Hot High Performance Coatings Booth. A few photos of the car released by RallyWays an hour after the show began immediately gathered attention and many questions – Specially given the fact the roadster has a differential sticking out of each end. The first thought is indeed a correct assessment – This is an all-wheel drive classic ’32 Ford Roadster. 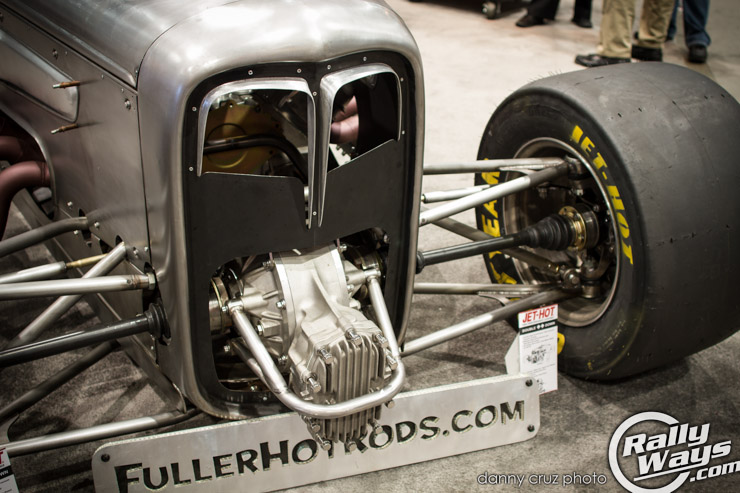 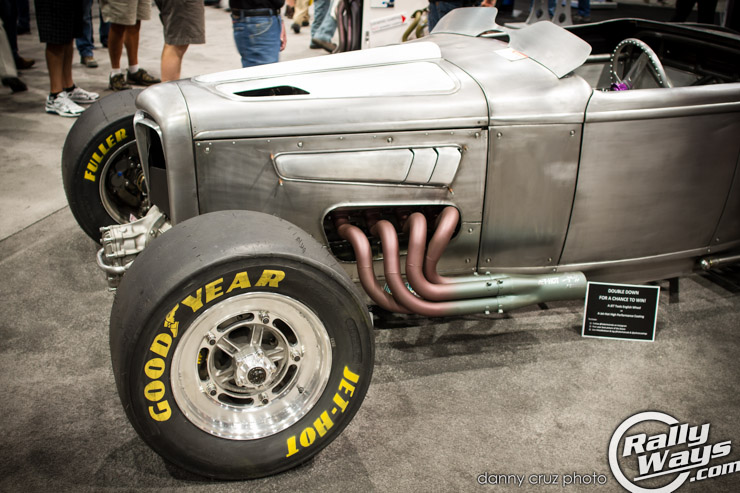 A conversation with Gordon McGilton from Jet-Hot Coatings revealed the story about this car. The car was built by renowned fabricator Bryan Fuller inspired by the story of Emmett Burton’s car. The decision was made to create the car that Mr. Burton would have built had he been doing it today instead of in the 70’s.

Using today’s technology and finding ways to innovated something supposedly nearly impossible to innovate at this point, the Double Down was created. The reason the innovation that went into this car is so ground-breaking is because the 1932 Ford Roadster is one of the most adopted platforms chosen by hot rod builders. During our conversation, Mr. McGilton said, “Since 1932, people have been building 1932 Fords.” This makes it very hard to do something really different.

And indeed they figured out how to do something different with a 1932 Ford, such as using AWD, a different chassis setup, quick-change front and rear ends, and unique setup and tuning. They also wanted the car to have a look that demonstrated that outside-of-the-box thinking. 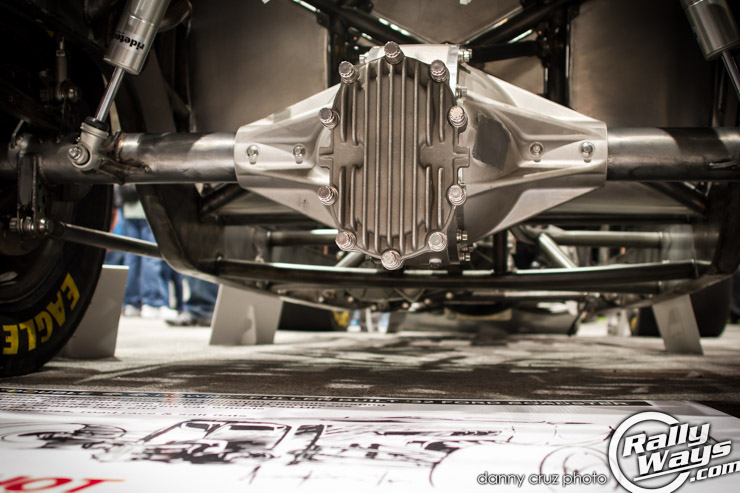 The car is going to be kept in bare metal except for the areas that Jet-Hot Coatings will put their proprietary coatings on. The only places the car would have color is were Jet-Hot will choose to add coatings – in other words, no paint. This also shows the car you are seeing here in not a completed project but rather a live, evolving creation.

Don’t get completely lost in the looks; the numbers are hugely impressive as well. 900 horsepower…

Once the car has been completed, they are taking Emmett Burton, to do the things he dreamed about doing back then. The car is going to drive cross-country, race on a road course, autocross, run at the Bonneville Salt Flats, drag race and more. Adding to the ever evolving nature of this project, the Double Down Ford ’32 Roadster would of course have to be adjusted for all those kinds of events. Things like different tires, different suspension setups and safety equipment, roll cages and what not will all be part of the morphing process from event to event. 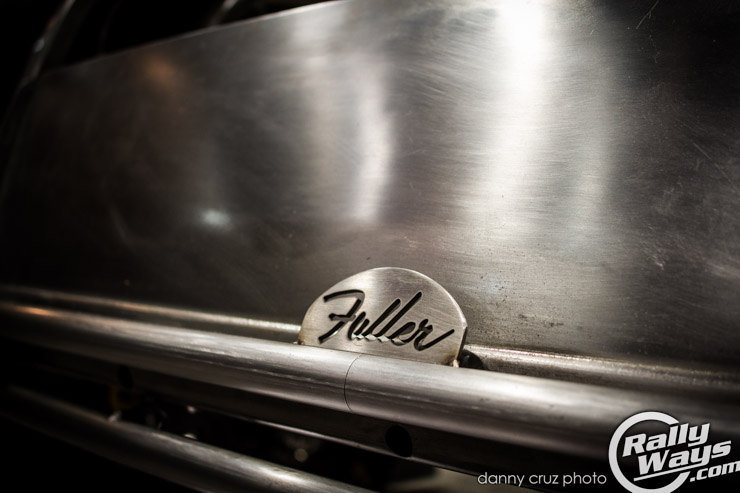 Bryan Fuller has been on Café Racer, Two Guys Garage and other TV Shows and has worked with Chip Foose. He has a shop just outside of Atlanta. “He is a metal worker supreme and a great guy to work with,” says Mr. McGilton from Jet-Hot. He obviously likes to think outside the box. Like Bryan Fuller, Jet-Hot is an innovative entity. The company offers 3 types of coatings to either manage heat, reduce friction or protect metal from corrosion. This collaborative effort is also an opportunity for Jet-Hot to put their coatings to work, all in the same unique vehicle. 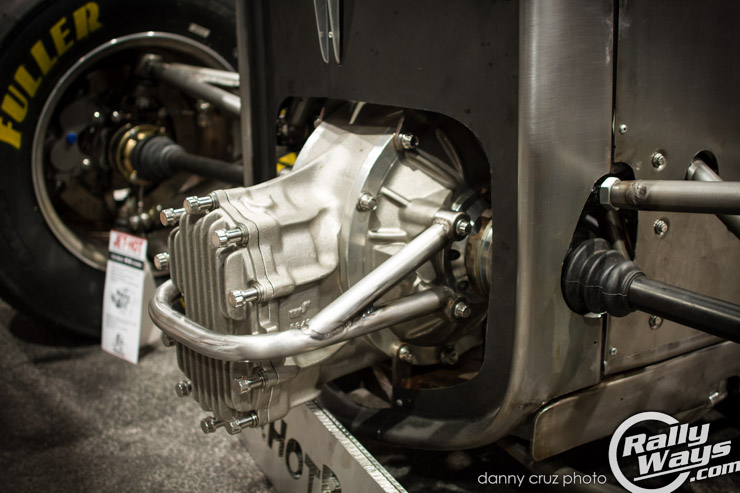 Don’t get completely lost in the looks; the numbers are hugely impressive as well. 900 horsepower out of a Boss 429 engine, 28.5 x 14.50-16 Goodyear Eagle racing slicks and all-wheel-drive using a GM transfer case and a G-force clutch-less 5-speed box. That’s only the tip of the iceberg. This car has surprises all over. Just make sure not to touch that header as you’re climbing in! No matter of special coatings is going to help you keep your skin!

And why “Double Down?” Well, think about it. It’s all-wheel-drive.

You can read Bryan Fuller’s original story about Double-Down on Jet-Hot’s site here. You should also check out more of Bryan’s work on his site Fuller Hot Rods.