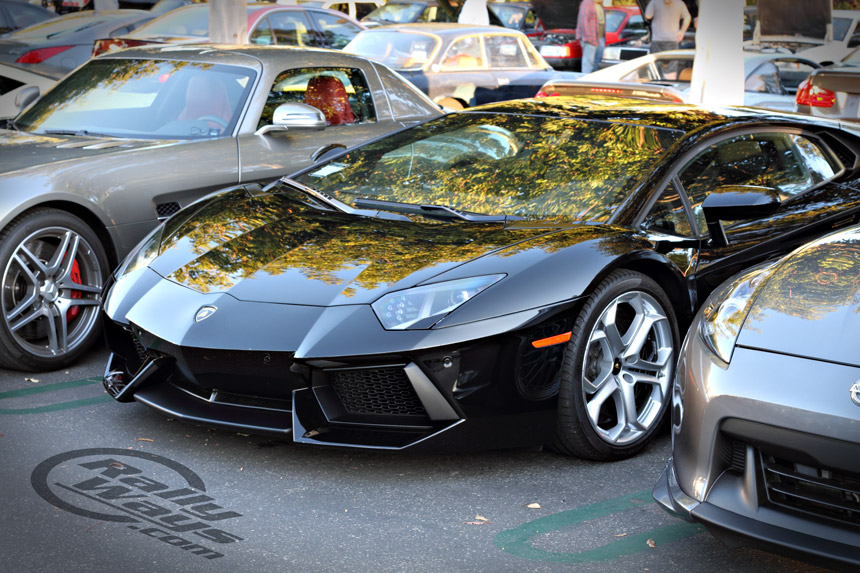 I went to Cars and Coffee Irvine Labor Day Weekend with my friend Mike, a Corvette enthusiast. Let me start by saying, I completely underestimated that car show. I had no idea how good it is.

I’m a regular at Cars and Coffee Carlsbad, a relatively small get-together, yet featuring some very cool cars. I’ve been hearing for months now how Cars and Coffee Irvine is an amazing show – the bee’s knees of cars and coffee gatherings. So, when our friends from San Diego Car Enthusiasts (SDCE) club told me that they were headed up there for Labor Day Weekend Saturday, I couldn’t resist. Keep reading for the story and all the photos…

Never in a million years could I have expected to see a Ferrari Enzo, Ferrari F40, McLaren MP4-12C, Lamborghini Aventador, Lamborghini Diablo, Lamborghini Countach…  ALL IN THE SAME PLACE…

Given I’m a little further North than the SDCE guys, I left earlier hoping to meet them up in OC. Mike and I arrived in my Mazda MX5 NC around 6:15AM, after leaving Carlsbad shy of 5:30AM. That was the best thing we could’ve done. By 6:30 there was barely any space left in the Mazda North America Operations parking lot where the show is held every Saturday. While you can arrive at just about any time between 7 and 9AM in Carlsbad at the Outlet Mall, in Irvine, if you get there too late you won’t be able to bring your car in and you will have to park outside. There is however a neat multi-story parking lot next door where spectators and overflow can park to attend the show. So, if you spent the entire Friday night detailing and waxing your show car and then woke up late because you were too tired, your piece of work might end up confined to the multi-story lot.

Needless to say, I couldn’t believe it. Never in a million years could I have expected to see a Ferrari Enzo, Ferrari F40, McLaren MP4-12C, Lamborghini Aventador, Lamborghini Diablo, Lamborghini Countach and countless other super-rare cars ALL IN THE SAME PLACE, ON THE SAME DAY! It was beyond comprehension. I’ve attended PAID shows that weren’t this good!
There were at least 5 Ford GT’s, countless Porsches including some fine GT3 RS and classic Speedsters.

There were only 2 NA Miatas, one being a supercharged,nicely built up car. My NC MX5 Miata was the only one at the show. Feels pretty cool to be so rare amongst so many Ferraris, Lambos, and others. A bit ironic given the show is held at the Mazda parking lot.

What follows in some photography I took to give you an idea what it’s all about. The photos are great, but nothing beats being there in person. So, if you live anywhere in the vicinity of Orange County, I recommend you dedicate a Saturday just to wake up early and attend this show – even if you don’t have a car to display, just come enjoy. If you live far away and have the means, trust me, this show alone is worth a plane ticket! It’s easy to get to as well – It’s close to the 5 freeway on the Alton Pkwy exit.