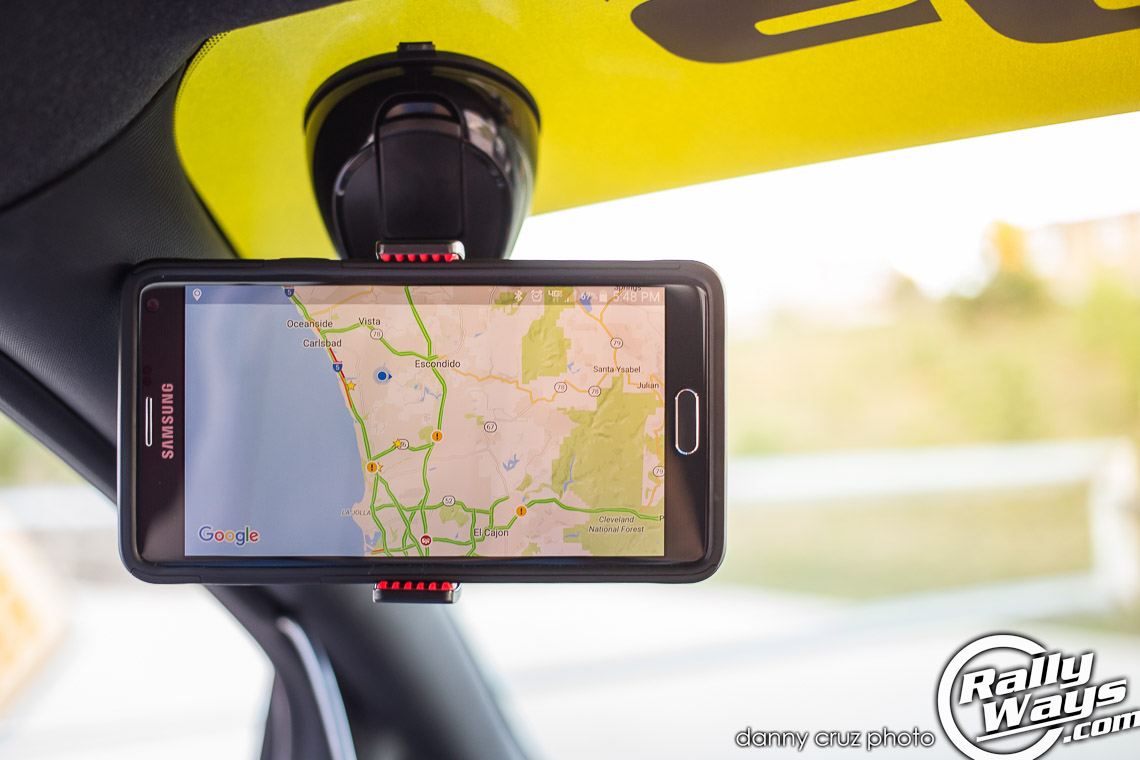 Here we have a very clever smart phone holder for car dashboards. It’s called Montar and made by a company called WinnerGear.

The word Montar means “mount” in Spanish. So there you have it… It’s named properly. While this is of course designed to be a GPS and cell phone holder for car dashboards for easy viewing and navigation, I had a whole other purpose for it from the beginning. I’ve been looking for a clean and elegant way to mount (there it is again, Montar) a COBB AccessPort to the RallyWays Fiesta ST COBB Stage 3, AKA #RallyFist in social media, onto what is a rather complicated and very contoured dashboard.

The COBB AccessPort is similar in size to most smaller smartphones, so the WinnerGear Montar should work perfectly for that. As a phone holder for car dashboards it definitely looks the part. It’s just a matter of thinking a little bit outside the box and mounting an Accessport to it instead. Plus, the COBB Accessport has a different shape as compared to most mobile phones and GPS units. The sides of the Accessport are pinched and curved inwards. This actually makes it even better in helping the device stay in place on the cell phone holder.

Looking closely at the Montar, there are many things I liked about it when compared to other phone car mounts. First of all, I like the simplicity. I believe a cell phone car mount shouldn’t be too complicated, some of them just are. That’s just more things to break. The only moving parts are the phone grip/claw thing that holds the smartphone, the swivel ball to adjust position and the little lever to cup the suction cup. The smartphone grip itself is even super simple. Instead of having things to tighten and levers to pull or whatever, the grip itself is a very simple spring-loaded mechanism with a red silicone grip area. You just pull it apart to make space, stick your smartphone, GPS-unit or COBB Accessport in this case and that’s it! When you let go, the claw grips on your device and holds on tight.

I’m not using the COBB Accessport all the time, sometimes I do want to use my cellphone for navigation. I had no problem mounting my Samsung Galaxy Note 4 onto the WinnerGear Montar. As some of you may know, the Galaxy Note 4 is one of the biggest smartphones on the market shy of a tablet. Some call it a phablet. When I’m not using my COBB Accessport, I’ll be mounting my Note 4 on the Montar for sure. Works fine vertically as well as landscape. Given it works fine with the ginormous Note 4, it will also work fine with the Samsung Galaxy Note 5 as it’s more or less the same size. The Montar would make a perfect iPhone car mount for the iPhone 6 and iPhone 6 Plus as well as the new iPhone 6S as neither of those is bigger than the Note 4.

Now, here’s where it gets really clever, specially with cars that have a very contoured dashboard or one who’s dashboard surface has a lot of texture or even leather or fabric. You can mount the Montar to those places just fine! So far so good for the Montar phone holder. For car enthusiasts, this is very good news. I’ll explain more in detail, but let’s backtrack a little first…

The WinnerGear Montar comes with only 2 things in the box — The mounting unit itself which has an integrated suction cup system, and a little plastic disc with 3M tape. When I first started trying to figure out where to best mount the thing I naturally gravitated to sticking it to the windshield. However, I like to be a little bit more inconspicuous with these things and I don’t like the look of suction cups on the glass, specially how it looks from the outside. That sort of thing is fine for an average daily driver or a rental car, yet certainly not acceptable for a show car.

Luckily, the RallyWays Fiesta ST has a vinyl visor at the top. I found I could stick the Montar to the glass where the suction cup would be hidden behind the vinyl visor. Cool, that works! See the photos.

I found I could also run the cable for the COBB Accessport along the inside section of weather seal for the A-pillar, or behind the A-pillar trim itself. The Accessport only works if it’s connected, so this cable is very important. My phone I could just mount on there every once in a while, with no power cable if I don’t want to run a wire for that too. However, it wouldn’t be too hard to run wires for both devices. Yeah, I don’t like exposed wires by the way.

I wanted to try a few other things however. That’s when I discovered how clever this Montar smartphone mount really is. See, cheap smartphone mounts have simple clear suction cups. However, the Montar has an ultra sticky gel suction cup that conforms to textures and curves a lot better. Where most suction cup GPS mounts will only stick to perfectly flat and shiny surfaces like glass, the Montar’s gel suction cup will happily stick to textured surfaces such as your faux-leather dashboard texture! This is where the Montar really shines as a phone holder for car enthusiasts… We are a particular bunch, often OCD, and we want things a certain way. We are not content just slapping a phone mount to the inside of the windshield and having the power cable just dangle there. Plus, as a mobile phone holder for car enthusiasts, it can double as a holder for things like the COBB Accessport in my case, or other system monitoring devices. If you are a HAM, the Montar could probably even hold a small handheld HAM-radio.

The Fiesta ST’s dashboard is textured with a different kind of pattern that’s really kinda rough and the Montar’s gel suction cup seals around it just fine! I’m stoked with this because it means I can mount the COBB Accessport lower, yet not have it stuck to the inside of the windshield. This means the cable run is shorter too, which is great.

Now, it gets better. What if you have a surface that’s vented, like fabric, a vent or a grille and you want to attach the WinnerGear Montar to it? No problem, that’s what the 3M disc included is for. This disc comes with a very sticky but clean adhesive, very much the same stuff that GoPro uses for their sticky camera mounts. The adhesive is likely 3M VHB (Very High Bond) or something like that. Point is, you can stick this little disc on the vented surface and then stick the Montar to it, done deal. This really increases the available places where you could mount your devices to.

As far as downsides, the only thing I could find was actually not a downside at all, but a tradeoff. If the Montar were a little taller or longer, I could have mounted it to the tiny triangular side window forward of the rearview mirror on the driver’s side. I could have then covered the suction cup from the outside with a round RallyWays sticker. But it’s a little too much of a reach as the Montar is a bit short for that. However, I say it’s a tradeoff rather than a downside, because if the Montar were taller then it would be too cumbersome to mount in the other areas I discussed above. You can’t really have it all. Oftentimes, when you improve for a specific purpose, you compromise on others.

The other thing I found is that you can’t mount the unit backwards, as in turning the swivel a full 180 degrees. I mean, you can turn it 180 degrees, but then the angle of the device would be all wrong. This was me trying to find some awkward places to mount it and trying to be all extreme about it. It’s no big deal. Plus, this is also a trade-off rather than a downside. If WinnerGear had added another swivel point to make it even more adjustable, the unit would lose some of the charm that comes from its simplicity.

I’m super happy with my WinnerGear Montar. Thanks to the versatility of mounting it to textured surfaces I’m confident in calling the Montar the ideal phone holder for car enthusiasts. One of the things I was really trying to wrap my head around was a good solution to mount my COBB Accesport to the RallyWays Fiesta ST project car. I’m 100% certain I found the solution. The only problem: I wish I had gotten not just one, but rather 2 or 3 of them to put one in each car!

By the way, I got my Montar from Amazon. Click the image link below if you’d like to order one. Be sure to read the reviews there as they are very interesting.